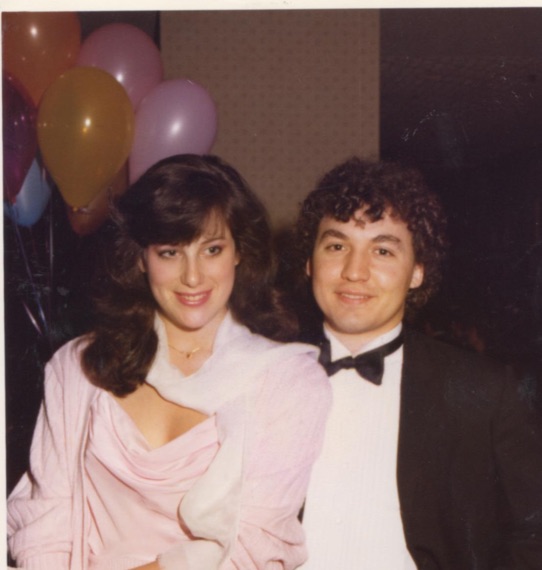 In 1981, I went to my first fraternity party at UC Berkeley and danced to "Rebel Rebel" by David Bowie. I even had on a red jumpsuit a little like the one he wore in the video. I was a freshman at Mills College in Oakland. The world seemed so much freer than when I was in high school. And much more stylish. I felt like I could do whatever I wanted, even though what I wanted to do was take classes in literature and go on to law school. I didn't have much imagination.

For the first time in my life, I felt attractive. And chic, even though I probably looked like a cough lozenge in my Nordstrom new wave uniform. I'd stopped going to dances in high school because I couldn't bear standing around waiting for guys to ask me to dance. So few did; I had been branded a nerd in the high school caste system. Plus at 5'9", I was taller than a lot of the guys.

But at that party, guys wanted to dance with me. My fashion sense was on point. I did not feel too tall. At that moment I knew college would be tons better than high school. I could speak up in classes without having to edit my vocabulary AND I could get asked to dance AND I could wear whatever I wanted. There was no more social strata slotting me in at the bottom. And no more co-ed volleyball where I'd inevitably miss the serve eliciting groans and cementing my diminished status in the high school pecking order.

My life was starting over and it began with dancing to "Rebel Rebel." Even though I really had nothing to rebel against. And my face was never a mess, it was painstakingly painted in shades of Clinique pink.

Later that year, my boyfriend George and I (pictured above at my college formal) went to see the movie "Ziggy Stardust and the Spiders from Mars" at the Northside Theatre in Berkeley. I'd never seen a concert like that. It was art and artifice. It was fierce and sad, dramatic and exotic. I felt another sense of promise, maybe of a life that could incorporate being a lawyer and having a sense of style, of being quirky, but not alienated.

George and I were both Bowie fans, he more than I, but then the year before I'd been in high school and hadn't even known about New Wave or Art Rock or French Cinema or any of the other things that I'd become devoted to. And talked about as if they made me seem interesting.

When our parents thought we were too serious and wanted George and I to spend more time apart, I played "Heroes" over and over again on my record player in my dorm room, feeling like a romantic heroine in a novel, even though their demands were pretty minimal. And I was a grade-grubbing college student, a future lawyer, not a hero facing incredible odds to be with the one she loved.

But the deep longing that I felt, and all that solipsistic self-importance, was encapsulated in that song. George and I might be forced apart at times--he in the South bay at an engineering job, me at college in Oakland -- but we would prevail. "Heroes" has such urgency and I had such a comfortable life, yet I felt the lyrics so strongly.

And I played the song too often and too loudly; my downstairs dorm mate complained about the music seeping through the floor into her room. But I didn't care. I had found true love and it would prevail against all odds. Even though there really weren't any odds, just the drama of first love.

By my junior year of college, I'd stopped going to fraternity parties. In a few years the English classes I loved would change into law school classes that left me stressed out and confused. The red jumpsuit was faded and trashed, a relic of early eighties fashion.

But George and I lasted. And whenever I 'd hear "Rebel Rebel," I'd rock out like a dork remembering that sense of promise and my manic, but hopeful, energy.

When George died in April 2013, after thirty-two years together, the lyrics to Bowie's "Space Oddity" kept floating through my mind. They still do. At first, the lyrics seemed like he was saying goodbye to me. We never had any actual goodbyes. He'd expected to survive for much longer. But he was blindsided by cancer just like Major Tom was blindsided when he loses control of his ship and he floats off, unable to return.

"Tell my wife I love her very much she knows."

I still get tears in my eyes from that one line.

Later, the song came to encapsulate my sense of feeling so very alone. Everything felt different from when I was married. Things tasted different. It felt like I was floating around in my own little tin can observing things, but disconnected from everyone, powerless to return to my old life, adrift.

When I was young, my hopes were pedestrian, but David Bowie's music leant gravitas to my dreams. His voice expressed such longing. More than any other artist, his videos provided the visual for my fantasies. They were stunning, unlike anything I'd seen before, and in that way aspirational, even though my obvious aspirations involved George and law, my secret throughts were of fashion and style.

Later, "Space Oddity" became the soundtrack for my loss. I wonder where my earlier sense of promise has gone. And when I next hear "Rebel Rebel," I'll more likely bow my head instead of dancing.