As a kid growing up in LA, I remember living down the hall from Peter Firth. I played video games with his four kids. Wesley Jonathan lived at the other end of the hall, and he would show off his Usher style dance moves to the kids in our complex. The best days I remember were when I would go to visit my mom who worked on the set of "Seinfeld" after school.

It was beyond Disneyland for me. I'd get to watch the funniest shows film live right in front me. At the same time I observed and learned about the entire process of what went into creating the show; watching my mom record the sound on the boom, talking with the camera operators, and joking around with the actors. 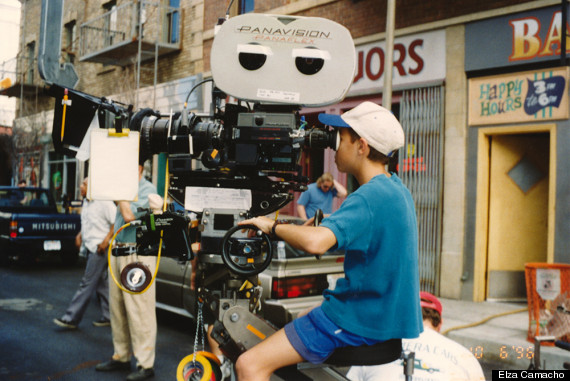 The Seinfeld cast was always very kind and generous to me. Jerry would throw a football around with me or shoot some hoops when they weren't filming. Here I am, a sixth grader out on a school night, hanging out on a TV studio lot with Mr. Jerry Seinfeld!

One evening in February of 1997, a few months after my 11th birthday, I was visiting my mom on the New York Street location back lot set. Jerry starts telling me about the new Porsche Boxster that he is getting soon. He goes on to say it will be the first Boxster ever produced, just for him! Talk about a sweet deal, right? What he said next was something I could not believe.

Jerry said, "I'll take you for a ride in it when I get it." I was stunned. Seriously? Am I in the Twilight Zone?

My mom was listening to our conversation. After I walked away to go hang with the camera operators, she went over to Jerry, "Um ... Jerry. You can't promise something like that to him. He'll tell the kids at school and I don't want him to be disappointed."

"Carol, I want you make sure that Travis is the very first person to ride in the car with me." Then he turned back to my mom, "Will that do, Elza?" "Yes, Jerry you're the boss, thanks Jerry."

About two weeks later, we get the call that the car had arrived. I'm bursting with excitement it is unfathomable. My mom and I meet Jerry at the Seinfeld offices and he shows us the shiny new Boxster. This thing looked like a spaceship to me, on the inside too! 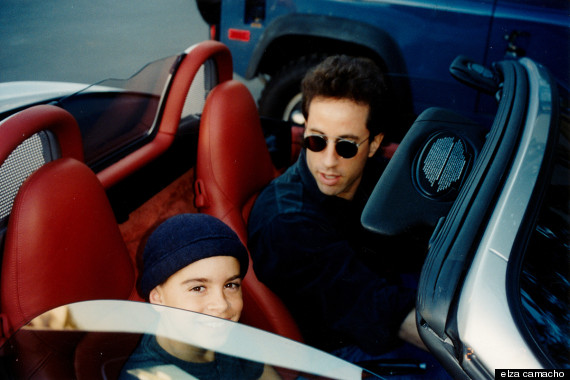 Travis and Jerry in the Boxster.

As my mom snaps photos, I get into the car with Jerry and we drive off the lot. He takes us on the 101 and really shows off the Porsche speed and handling. Damn this thing is fast! This thing drives like its on rails!

I felt like I was in a Bond film moment. We eventually hit Thursday evening traffic and cruised along showing off the sweet ride and talking about the car, a lot like he does in his current show "CICGC".

As we exited the freeway Jerry reminded me to not tell my mom he drove fast. Coming back onto the lot I was pumped with excitement. When my mom asked how it went I just blurted out, "It was awesome! We drove really fast!" After realizing that I just screwed that up big time, Jerry said, "Travis you weren't suppose to tell her that." We all laughed about it anyway.

Later on that year, I was hanging out on the set when 1st Assistant Director Randy Carter said something like, "Hey, why don't we use Travis for this." What he was referring to were the kids they needed to appear in the infamous "Boom Box Incident" photo. Talk about being in the right place at the right time. I was thrilled to be a part of anything they needed. The next thing I know I'm in a photoshoot with Jason Alexander and getting paid for it! This is sweet!

It was a pretty awesome year for a 7th grader: Riding with Jerry Seinfeld his Porsche, appearing in an iconic TV show and making $200 from it so I could now buy some cool Nintendo 64 games.

Every now and then when "The Slicer" airs on TV someone will call me and tell me "Hey! I saw you on Seinfeld!" I've caught myself on TV once or twice.

One Monday morning I was surfing Reddit when I notice that Jerry Seinfeld was doing an AMA. I didn't think much of it, but before I walked out the door I posted a comment thanking him for giving me a ride in the Boxster, attaching some photos for proof. (As we all know, it never happened unless there are photos).

When I came back to my computer later that day, there were dozens of comments about it and people were genuinely entertained. I was even invited to do an AMA in the r/Seinfeld subreddit!

Later that week my mom and I hosted an AMA on the Seinfeld subreddit with great success. There were dozens of people asking us all sorts of great questions and looking for stories from behind the scenes. I'm glad we were able to please so many Seinfeld fans with our stories.

Looking back on the days after school I spent visiting my mom at the set, I was so fortunate. I was lucky to be able to spend time with the Seinfeld cast. I looked up to them as a kid and say that I had such memorable experiences.