For this installment of The Huffington Post's "My D.C." Q&A series, we chatted with Comet Ping Pong booker/promoter Sasha Lord.

Sasha Lord is leaving town. She'll be traveling through Europe beginning later this week. She'll attend a festival of ping-pong themed restaurants and bars from around the world -- yes, there's more than just one -- scout for new bands and pick up a few DJ gigs. She'll return in December. The music at Comet Ping Pong will not slow down. It's ramping up.

Lord, formerly of Black Cat and Girl Scouts of America, is one of the people making the D.C. music scene a scene. Multiple nights a week she stages shows, usually featuring one or two out-of-town acts, at the upper Connecticut Avenue pizza place.

During our interview she was also busy tracking down gear for a touring Russian band, teaching her new intern a few social media tactics and playing with a few children of the Comet staff.

HuffPost: Why are you in D.C.?

Lord: I was born and raised in D.C., well, Arlington.

At first I wanted to nothing but get away from D.C. and then I gave it a second chance. I know I couldn't do what I do in other cities. I'm connected here. I started doing the shows four years ago.

HuffPost: Why did you start?

Lord: I needed something to do. I worked at the Black Cat for five years and missed it. I was working at the Girl Scouts as a director, square jobs. Those square jobs gave me the skills and organization I needed to run this. A lot of conflict resolution, I worked with a lot of volunteers.

HuffPost: Have you ever played music?

Lord: I haven't. I just failed at it. It was really hard for me to get the fundamentals. I got a D in guitar class.

HuffPost: What are some of the things you think clubs could be doing?

Lord: I send out a press release for each show. I promote each show.

Most of it is learning to maintain and how to keep up.

HuffPost: Who makes your posters?

Lord: Lindsay Johnson and Jeanna. I was at Red Onion looking for someone to make a K-Holes, AIDS Wolf posters. I was talking to someone who told me their friends Jeanna and Lindsay got into screen printing because of AIDS Wolf. From there they started doing posters for me. Jeanna recently moved so Lindsay is doing all of them and each one gets better. She's perfected it and is now getting asked to do artwork for bands all across the country. It's fun to see someone growing with the shows.

The posters make it a good vibe. It's a happening, not just a show.

HuffPost: Is there a music scene in D.C.?

Lord: Definitely. It has definitely grown in the last four years. There are tons of kids doing house shows, the venues are growing, stuff is happening.

HuffPost: Do you have fun doing this?

Lord: It depends. I would like to keep Comet sustained and strong..

I'd like to have a place like the Space Gallery in Portland, Maine. Something that's small, non-profit and has an intern staff. I don't ever want to have a club vibe.

HuffPost: What's the bad thing about the club vibe?

Lord: The smell. The bad attitudes. Here, bands are in a better mood. The reason why we get a lot of good musicians is we have the best meals. We're good to bands and fair.

HuffPost: In addition to booking you recently began DJing.

Lord: I was recently given some opportunities. I got to do it at Chez Billy, nailed it, had a crowd come out, did it recently at Star Bar in Atlanta. I'll be doing it Nov. 9 in Paris.

It's psychedelic, sixties, dance-y soul music. It's fun to get to be the artist.

Click through for a sample of Lindsay Johnson's poster art for Comet Ping Pong. 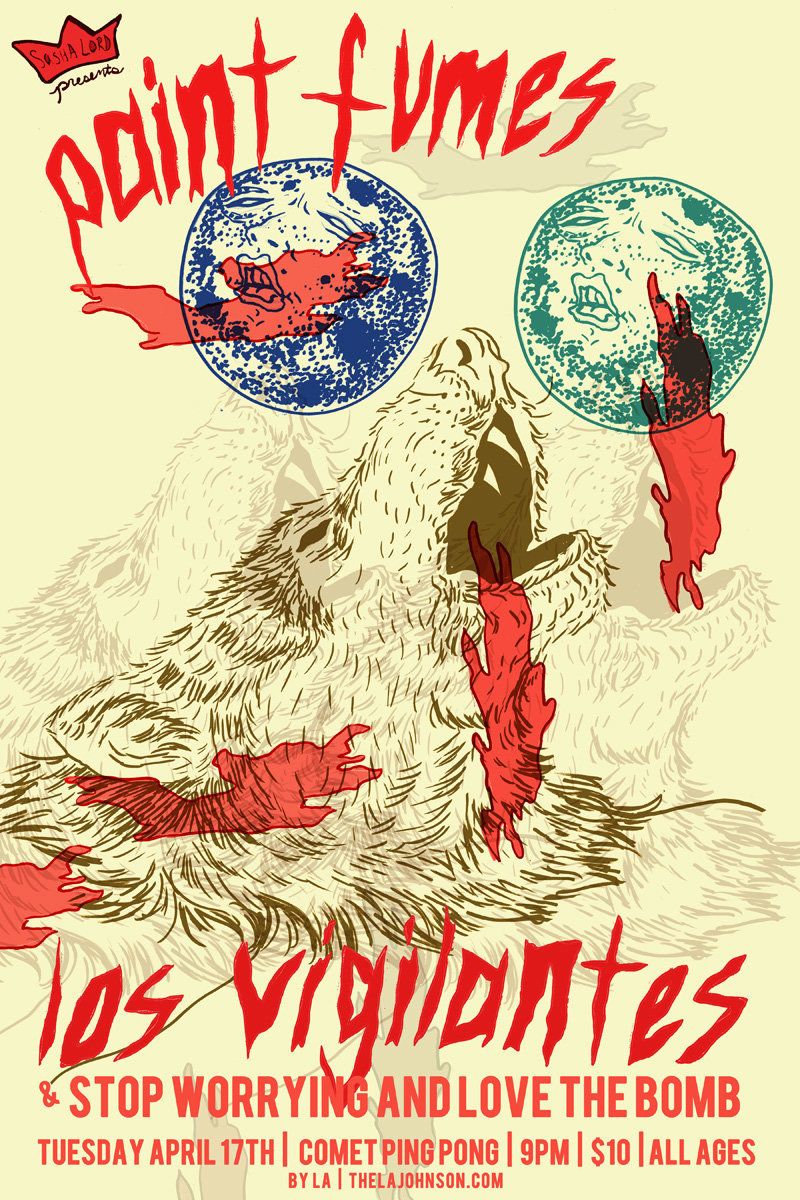