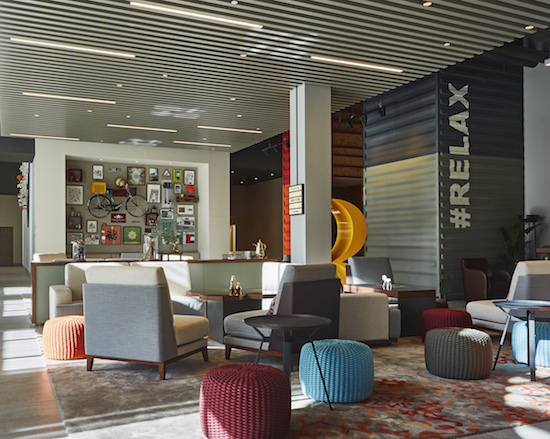 If you build it, a city like no other to rise out of the sands of the desert, they will come.

Whenever I'm in Dubai, I discover something new that makes me fall in awe of its grandiosity. This time around, in the full heat of an Arabian Peninsula summer -- and we're talking 110 Fahrenheit in the shade! -- I've been wondering how all the majestic buildings that fill the Downtown Dubai skyline (and now are featured in the just released Star Trek Beyond) could have been thought up, to rise quite literally from foundations dug in sand, in the middle of the desert. Then I realized that while I can't spend more than one full minute in the early morning sun, in these 100 plus temperatures, the inhabitants of what today is called the United Arab Emirates, can, do, and have, for centuries. They've thrived in an environment that seems impossible to an average westerner, and through their resilience, and imagination, they've made their dreams come true.

In retrospect, I realize my mistake was perhaps doing all of this thinking outside. Two minutes in the Dubai heat turns me into a half cooked raisin flambé, so I quickly found great respite in the air conditioned, calm and private lobby of the Rove Downtown. Their tagline "exploring without borders" seemed perfectly in line with my own credo. 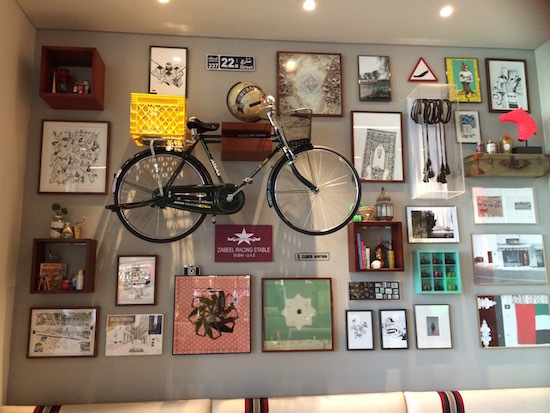 So there I settled on a comfy couch in the corner of their interactive lobby, filled with artwork and functioning WiFi for all, and almost like magic, found the everyone-is-included, all accepting, integrated world I'd just experienced the night before on the big screen Utopia of Star Trek Beyond's space station Yorkville. In an atmosphere that could easily have been somewhere in Seattle or San Francisco, I spotted three American grandmothers on their girls-only vacation, walking on their way from breakfast to the pool, crisscrossing paths with some young girls in shorts, sporting wet hair, clearly working that same itinerary backwards, all the while a Saudi couple in full national dress, the woman with her face covered, sat behind a wall and played video games plopped on a giant pillow the floor.

Sometimes, in Paolo Sorrentino's films there are scenes reminiscent of this kind of cultural criss-cross, but to watch it unfold in real life, well, it's what I live for. 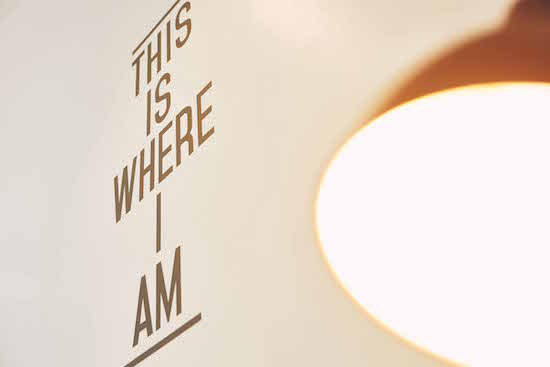 I ran into Anne-Cecile de Chaumont, the Design Manager for Rove Downtown, and managed to have her explain what I could feel, put into words that ease of comfort and belonging that filled the lobby, and the halls of the place. She indulged me by describing that "Dubai is a mix of cultures, of heritages, the Arabic influence of course, but also with so many people living here, everybody adds layers to that," continuing that "we tried to reflect that in the artwork, tried to reflect the contemporary Dubai. That's why somehow when guests come in, each of us will find something that appeals to him or her." The final lightbulb moment for me came when she concluded that "even some of the things that may not be made in Dubai are used in Dubai, are meaningful and have a story behind it." 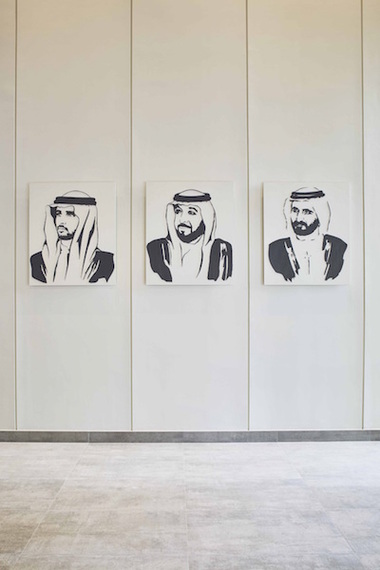 Within a series of artwork on the wall of the lobby lounge, I found a friend's work, Bahraini artist Nasser Alzayani's drawing on a page of Arabian Business, and it reaffirmed my theory that the world is becoming increasingly smaller, and we must find a way to get along, to avoid disaster. Actually, starting with a cup of tea in a lounge like this one, may not be a bad idea. Even the Sheikhs' portraits, a must for every building lobby in Dubai, are an artistic reinterpretation by Stephen Chambers at the Rove -- it's cool like that. 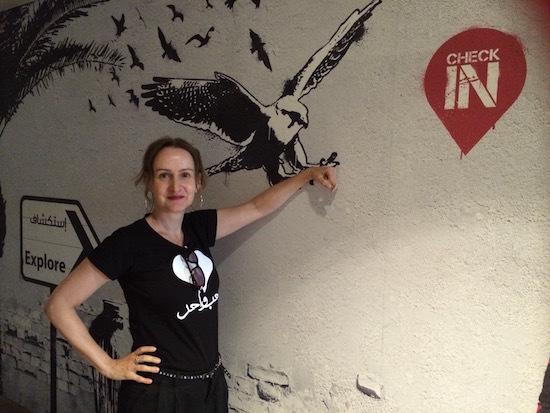 On my way to get a photo taken with the falcon stencils that adorn the walls of the corridors that lead to the rooms -- more on the artists of those later -- I stumbled upon the guests' laundromat, framed by a beautiful design by Emirati artist Khalid Mezaina. The artwork alone kept me mesmerized and just as I was about to catch the next elevator back to the lobby, I heard a man's voice. 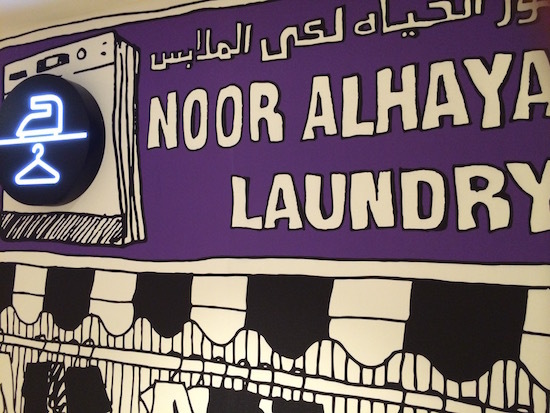 "Excuse me" the Saudi gentleman in the white thawb said, "do you know how to use these machines?" Pointing to the washers. I didn't, but his kindness required some in return, and I stepped into the laundry room, only to find there his veiled wife, in colorful jogging pants (peeking out from under her abaya) and sneakers, sitting comfortably, not a care in the world, her designer bag by her side. We gave each other a quick glance of sisterhood and she continued sitting there, watching her man struggle to do laundry. Once we had worked out that he needed more tokens and the machine started working, I left. Giggling from the topsy turvy experience I'd just had, a Saudi man doing laundry. While his wife watched on. You don't hear about that in the media. 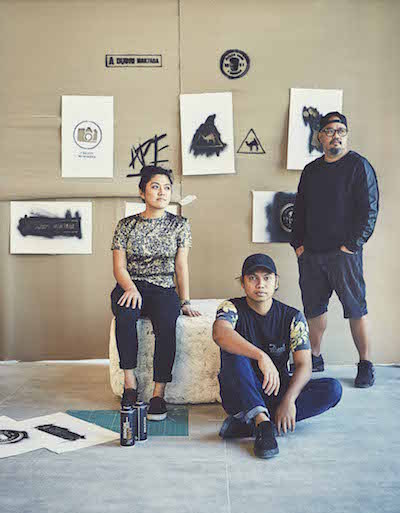 But then again, this place is built on human stories, of how a Filipino artists' cooperative called Ape Creative stenciled their way around the lobby and throughout the floors, of Chambers' wandering camels in the lobby, and Capsule Arts, the property's art consultants, chasing down inflatable animals to fill the luggage locker room just behind the lobby, to pay tribute, and reinterpret those iconic seaside shacks selling inflatable toys by Jumeirah Beach Road.

It is in fact with one of those inflatable animals that I closed my visit. I wanted to find Betty, the inflatable pink flamingo, who usually sits tied up in the Rove pool and about whom I've heard another great cultural bridge-building story. 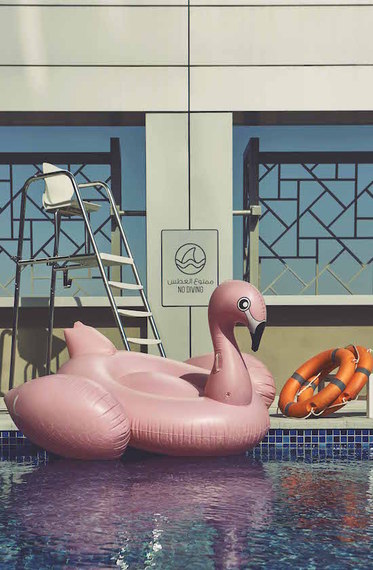 Betty was so huge when she first arrived, she needed a tire pump to be blown up, no normal bike pump or human lungs would do. But once fully inflated, no one in the group of designers handling her had a car big enough to carry her back to the pool. Stuck at the local gas station, in Dubai's midday heat, the group that had brought Betty there, which included de Chaumont, finally found a Syrian man with a pick-up truck, and loaded Betty onto the truck's bed, only to watch him leave, pink giant inflated flamingo bopping and swaying in the wind. Would he come back? And if he did, would Betty still be all of her blown-up beauty, or just a deflated, soggy, dusty version of herself?

Eventually, half an hour, respective language barriers and phone numbers never exchanged later, the Syrian man showed up with Betty in tow perfectly pumped and, as they say, everyone lived happily ever after. Or the rest is history,

Or, in Betty case, she floated in the Rove swimming pool thereafter.