This post is part of the Global Moms Relay. Every time you share this post, Johnson & Johnson will donate $1 (per action), up to $300,000, to the Global Moms Relay, to help improve the health and well-being of moms and kids worldwide in support of MAMA, Shot@Life, U.S. Fund for UNICEF and Girl Up. Scroll to the bottom to find out more.

Being a mother has majorly impacted my vision of the future. I dream about a new America and a new world, where all people are safe and treated fairly. I dream of living in a time where all Americans really do have the promise of life, liberty and the pursuit of happiness; an America -- and a world -- where discrimination is abolished and where we all join together to improve our communities. 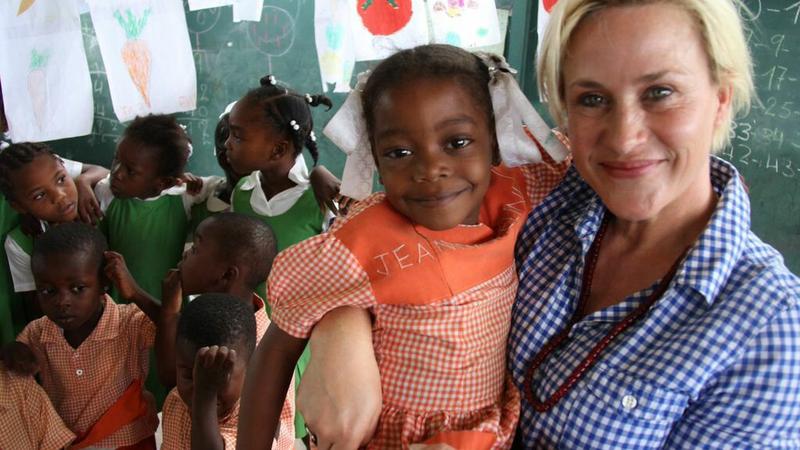 America and the world are at a tipping point. The economic empowerment of women is very important to me. When women are not paid fairly, they and their children are impacted negatively. I have a daughter, and I want her and all girls to be paid an equal wage for the same job as their white male counterparts. I want all women to be able to afford to live in safe housing and to have quality childcare; this becomes increasingly difficult when they are paid less because they are female. As it stands now, the gender pay gap in this country won't close until 2058.

How can it be that in America today a white woman makes 78 cents for every dollar her white male co-worker makes? And as bad as that sounds, African American women make only 64 cents on the dollar and Latinas are only making 55 cents. This is inexcusable.

Millions of women have fallen off the edge and are left to drown in poverty. Forty percent of all U.S. families are fed by single mothers. Then there are another 30 percent of families where women are contributing to combined family incomes. Clearly, if women are being paid less, they and their families are struggling.

We cannot expect a healthy America when single mothers have to take on second and third jobs to make up the wage gap. We have created a scenario that is unsustainable. The good news is we can change it. I come from a family of activists, and I see change and progress all around me.

My parents taught us by example to make the world you want to live in through action. I find the older I get, the more I want to be around people who care about the burdens of others and take even small actions to make the world a more loving place. Meeting active young people who are doing great things encourages me.

My siblings have all worked to bring about change and progress in different areas. I love and respect them all. It helps to remind me that while we may have some daunting times ahead, there are many beautiful people working hard to make things better.

My sister Rosanna has been advocating protecting women and children from sex trafficking. My brother Richmond has worked in Haiti helping with building tent camps, dormitories and classrooms for kids after the earthquake. My brother David has helped secure tons of food for food banks across the U.S., feeding thousands of Americans, and helped launch an anonymous food backpack program for students who weren't eating on weekends.

Equality and fairness isn't just about taking action to reduce poverty; it's also about identity.

My sister Alexis is a transgender woman, and she has helped not just our family, but many other people understand the social discrimination that trans women face in America today. There have already been seven trans women murdered this year in the U.S. We are still living in a time where they are not safe or protected in their own country. However, because of trans people living their truth despite the danger, public behavior is slowly changing. Chaz Bono, my sister Alexis and Bruce Jenner, and the many brave public figures who have had the courage to live their truth are helping to slowly change the conversation. I hope someday it opens people's hearts. It's time to "bring the nag back." I'm sort of joking, but not really. It is time we start nagging and don't stop nagging until we get laws changed and we get equality for women once and for all! Just as we seek fairness and access to rights, so many people around the world seek access to simple basic needs.

Globally, the world I want in 2030 is a world where everyone has clean water and access to hygiene. I work on ecological sanitation with GiveLove.org. Most people don't know that lack of sanitation and water-borne disease kill more kids worldwide than AIDS and malaria combined. More people on earth have a cell phone than a toilet. Working on sanitation is probably the least sexy thing on earth, but it is a necessity. The people I have worked with in this community are some of the most incredible people I have ever known. That's how it works -- you think you are helping people, and it turns out they are helping you.

You share, they give: Each time you 'like' or share this post via the social media icons on this post or comment below, Johnson & Johnson will donate $1 (per action) up to $300,000, to improve the health and wellbeing of moms and kids worldwide through MAMA, Shot@Life, U.S. Fund for UNICEF and Girl Up. $1 provides 1 month of targeted health information via mobile phone for a mom in India through MAMA (Mobile Alliance for Maternal Action).

You can also use the Donate A Photo* app and Johnson & Johnson will donate $1 when you upload a photo for Girl Up or UNICEF, up to $100,000. You can help make a difference in seconds with the click of your mouse or snap of your smart phone. Share this post with the hashtag #GlobalMoms, and visit GlobalMomsRelay.org to learn more.