Rami, 17, is fleeing from Syria to Germany. In Serbia, he spoke with CARE's Ninja Taprogge about his flight, the war in his homeland and his hopes. 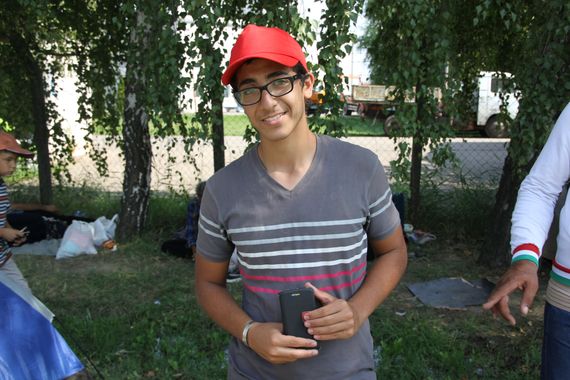 My name is Rami. I'll be 18 in four months. I can hardly wait for my birthday, even though I'll be far from home, and won't be celebrating with my friends and family. I'm from the Syrian capital of Damascus.

Eighteen days ago, I left my father, my mother, my brother and sister and began my journey to a new life. My family has put all their hope in me. They filled my backpack and sent me off with all their savings: nearly $3,000. My father works at a bank, my mother is the headmistress of a school, and my brother works in a hotel. My family has been setting aside a big part of their monthly salaries to pay for my trip.

They wanted to secure a future for me, far away from the civil war in Syria -- a war that has now forced more than 11 million people to flee for their lives. Only a few weeks ago I was still in school. Most of the chairs in the classroom were empty. Many of my peers just up and left -- from one day to the next. It was very dangerous and expensive to cross the border.

Some people have already fled Syria, others are on still trying to escape. Three weeks ago, it was finally my chair in school that stood empty. I drove my car to the Syria-Lebanon border. It was very dangerous and expensive to cross the border. I traveled through Beirut into Turkey.

There, for the first time, I could breathe again. And I had the feeling that I could really make it -- that my dream to live in Germany one day would come true.

In Turkey I boarded a boat that took me to Kos -- one of the Greek islands. The boat was two meters in length and only meant to hold five people, but there were more than 20 of us on board. Most of us were from Syria, but there were Iraqis and Afghans on board, too. The trip took more than two hours, even though the journey usually takes only 30 minutes. But we were slow because the boat was completely overburdened and weighed down. There was a woman on board with her newborn child. I was ready to to jump into the water at any moment.

The newborn girl wailed and wept through the entire voyage. The waters were rough and terrified a good many of the passengers. But I wasn't scared. I know I'm a strong swimmer. I was ready to jump into the water any moment. I'd wrapped my money, my passport, and my cellphone in plastic, so that everything would be safe. But we were lucky and arrived safely in Kos. We stayed there for four days.

It was very expensive, but we needed the break. There were many aid organizations at Kos who supported the arriving refugees. I helped the aid workers distribute water, juice, milk and food to my compatriots and to other refugees.

One day we were sitting on a hilltop right on the coast and watched how one boat with too many people on board started to capsize. We shouted to the Greek coast guard, who hurried over and were able to save everyone. Those images, memories like that, are seared into my consciousness.

I also have images from Macedonia burned into my mind. We experienced absolute horrors there. We were carted in a train to the Serbian border. We couldn't move, and had to wait -- anxious and afraid -- for many hours. We were like animals in a cage.

When we finally arrived at the Serbian border, there were already about 2,000 people waiting to be allowed into Serbia. We joined that group and were quickly sent over the border. But people panicked. Everyone wanted to be the first inside. People were careless, no one thought of the little children.

I had attached myself to a family during my journey who I knew from Syria. Amal, a little girl from this family sunk under the mass of bodies. All of a sudden, we couldn't see her. The people pushed down on her, until she couldn't breathe.

Her grandfather began to weep because he couldn't find her. But all of a sudden, I saw her. I could still reach her. I pulled her up towards me and carried her over the border.

I only arrived in Subotica, northern Serbia, today. I don't know how or when I'll move on. I only want to finally arrive in Germany, and live there in safety. Once I'm there, I'll bring my family to me. But first, I need to focus on making it into Hungary.

I rely on the help of others, and am very grateful for aid organizations like CARE. I'm trying to find out more about the situation on the border to Serbia on my cellphone.

My friends who've made it to Europe watch the news for me, and send me information that is very useful for the rest of my journey. But right now I don't know how or if I can make it over the Serbia-Hungary border. I've turned my cellphone off because I have to be careful with my battery life. The last time I fully charged my phone was in a hotel in Belgrad, and I paid a lot for that room. It cost about 100 Euros for me to spend the night there. I allowed myself that luxury because I was just so exhausted and needed the access to an electric outlet.

My cellphone is the most valuable of my few possessions. I mustn't lose it. Without it I can't text my mother. She worries about me, and she needs to know how I'm doing and where I am each day.

I wake up in a different city almost every day. I sleep on street corners, under trees, in fields. I'm exhausted all the time. The 4+ years of civil war in Syria have scarred my insides. And on this journey, I've experienced countless situations I can't forget.

Many people ask me why I'm on such a dangerous journey. They don't know how much more dangerous it would be for me to stay in Syria. This is the only way I can escape the military draft.

Ever since war broke out in Syria, no one is safe. I don't want to kill anyone. I don't want to bring more suffering and grief to grandparents, mothers, and fathers. I want to help people. And I can only be able to help others if I can find a way to stay alive.

Remi's story first appeared on Care-international.org's blog. This post was featured on HuffPost Germany and was translated into English.