Saint Patrick's Day fell on a Saturday this year. It was cold and rainy, and the memories I made that night will live with me forever. I've struggled for months with the decision to keep them as mine alone, but ultimately I had to let them out -- to write them down on paper -- so they may not decay in step with my forgetfulness.

The rain pummeled my windshield as I drove from my home in Hollywood to Pasadena for a special invite-only party thrown by Kip Thorne, a theoretical physicist at Caltech. The party was held at Kip's home, in honor of Stephen Hawking's 70th birthday, which was in January. Kip and Stephen are longtime friends, having together pondered fundamental questions about Einstein's general relativity theory and black hole cosmology. 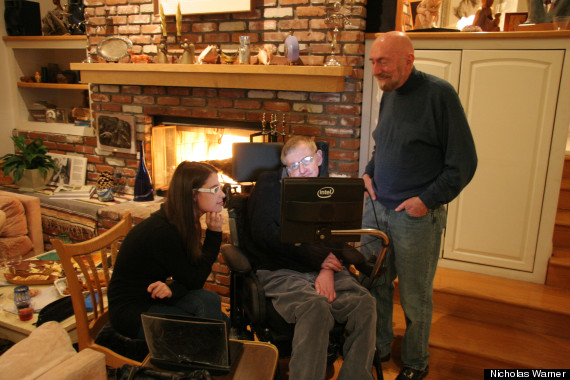 When I finally made it to the party, the first face I saw was that of a young boy. He helped me down the makeshift ramp that had been built over the steps in Kip's entryway and confidently announced that "grandpa Stephen" was in the living room. It immediately struck me that this man, one of the most influential and well-known scientists of the modern era, was also just a man -- a father and a grandfather.

I was nervous that I wouldn't know what to say, so I was relieved to find that he was eating dinner when I arrived. Now when I say he was eating dinner, what I mean is he was being fed. Sitting in his chair, draped with a large bib to catch the food that fell from his lips, I began to see Stephen Hawking in a new light. This frail, aging, helpless man wrote the first book I ever chose to read about physics. A popular culture icon, Stephen has starred in television shows from The Simpsons to Star Trek. He is just as relevant today as he was 30 years ago. In fact, the night I met him, he had just finished filming his guest spot on The Big Bang Theory, a beloved sitcom about four young physicists and engineers living in Pasadena, presumably working at Caltech. (I tried to pry the plot point of the yet-to-be-aired episode out of his assistants, but their lips were sealed.)

When he was only 21 years old, Stephen knew he was getting sick. It took years of difficult testing before he would be satisfied with a diagnosis: amyotrophic lateral sclerosis, or ALS. Also known as Lou Gehrig's Disease, ALS is a progressive dysfunction of the cells in the brain and spinal cord that control muscle function. It's one of five recognized motor neuron diseases, and its prognosis isn't good. Most people with ALS die within two or three years of diagnosis. Stephen has lived for nearly 50.

That being said, he has almost no motor control left. When I first sat beside him at the party, I told him it was an honor to meet him and asked if I could shake his hand. His caretaker knew by his eyes that he had said yes, so I took his hand in mine and gave it a delicate squeeze, being careful to set it back down in a comfortable position on his lap. We began our conversation with introductions and small talk about the weather.

I said in passing that the weather was terrible, and Stephen began composing a sentence on his portable computer. After several failed attempts and multiple deletions, his prose began to appear on the screen. He never ran it to the synthesizer, since I was sitting right beside him and could easily read his words in real time. Although I cannot remember what he said verbatim (I'm not a very good reporter, and in any event, I was invited to this party as a friend, not press), I do recall it being strikingly poetic. It was something like: With rains, as are oft' in Cambridge... 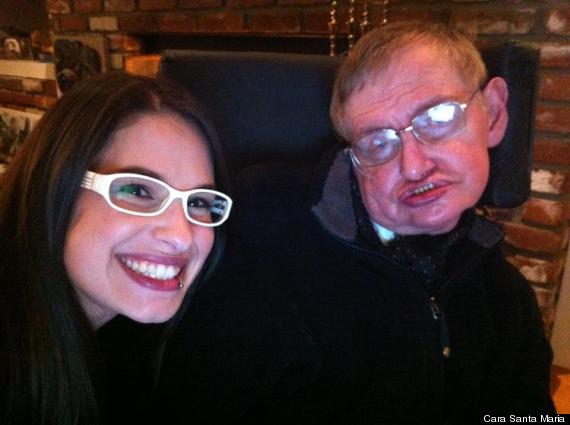 I sat with Stephen for more than two hours that night. Within that timeframe, he managed to construct only two sentences. His condition has deteriorated to the extent that he can only twitch his cheek muscles beneath his eye to control an ultra-sensitive electrode that connects his glasses to his communication system (see photo above). The second hour was spent composing the admission (again, not verbatim): At home I have an address which is a decoy; I also have another for those with whom I want to communicate. I laughed and touched Stephen on the shoulder, whispering that I hoped he was trying to tell me that he'd like to continue our conversation in the future. He never responded after that. To this day I wonder if he was being coy or flippant. Either way, I could swear I noticed a twinkle in his eyes, as if they were smiling.

When you engage in a two-hour conversation with someone who only says (writes) two sentences to you, there's a lot of space to fill and more than a few awkward pauses. At first, I found myself not knowing where to look. As he painstakingly assembled letters into words and words into sentences, I would cycle back and forth between his eyes and his screen, all the while being mindful of the necessary balance between engagement and lack of pressure. Periodically, his friends and colleagues would come to where we were sitting in front of the fire and talk through him as if he wasn't there. "It's so good to have Stephen back here in Pasadena." "Yes, he's looking good. I'm glad to see he's doing well." 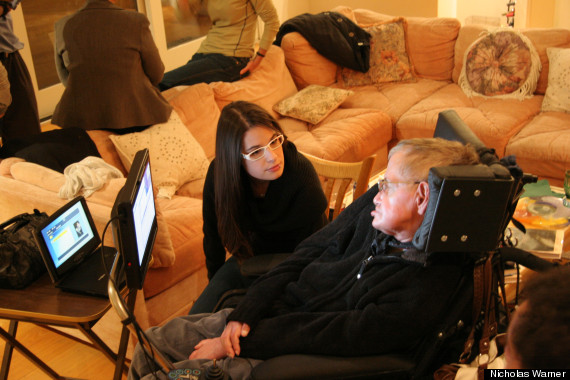 Stephen rarely does public talks anymore. When he does, he draws an impressive crowd. And most of the people sitting in those seats are unaware of the effort that goes into composing the script he will follow over the course of the evening. I don't really know the full extent to which he struggles to write. But I do know that Stephen's previous technician Sam Blackburn's claim that he can "speak" one word per minute seems astronomically high. A guest at the party told me that it took Stephen a year to write his last big public lecture, delivered at Caltech in January 2011.

People with ALS are trapped inside of their own bodies. The disease doesn't affect one's thoughts or emotions, but after it has progressed to the point that motor function is essentially nil, how can sufferers expect to communicate those innermost feelings to an outside world? I know that Stephen's mind is rife with creativity, and I found myself frustrated that I couldn't engage him in a deeper, more meaningful way. I felt helpless, scanning his eyes for the signs of life that I know were swirling deep behind them.

When I got home that evening, I cried. Not because I felt sorry for him, or because I realized what it is that I probably take for granted every day. I cried because I felt a fundamentally human urge to connect with this man -- an icon of brilliance in a world sorely lacking -- and I simply couldn't figure out how. Yet, I will hold onto the memory.