I stood in line, restlessly shifting from left foot to right as little rivulets of sweat ran down the nape of my neck. The Bangkok heat was not meant for standing. Outdoors. To take a selfie with a tiger. A tiger that's chained to the ground. What was I doing here again?! That thought ran through my mind in spurts but I kept reminding myself, the objective was to spend some time with my cousins, whom I was traveling with on a short Thai holiday, so if we were bonding over tigers, then hey, maybe it wasn't such a bad thing.

I'm not usually a bus tour sort of traveler. I think early on in my travel life, I recognized my desire for doing things on my own without being carted around like cattle from one sight to another with 50 other tourists oohing and aahing at something. So it was kind of surprising when I found myself evaluating this 12 hour bus tour from Bangkok to the Damnoen Saduak Floating Market, then to the Bridge on the River Kwai, and finally to some Tiger Temple Sanctuary. Short on time, it just made sense given all of us wanted to see something different that was offered in this all-encompassing tour. My interest was in the story behind the famous Bridge on the River Kwai. 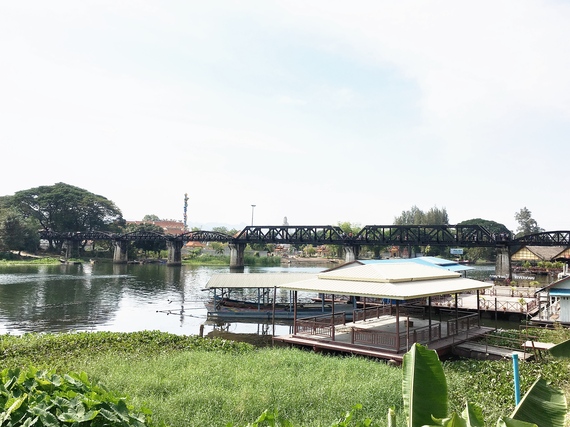 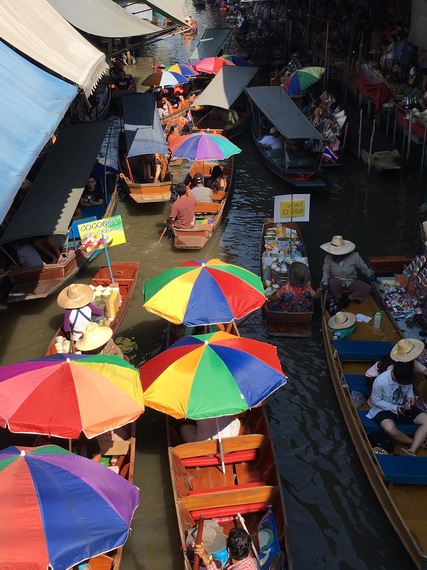 But the real story, I would later come to realize, lay in the Tiger Temple Sanctuary. As we trudged down from the parking lot where the bus dropped us, we walked down into a small canyon-like area, rounded the corner and came upon this open-air courtyard scene, where multiple tigers seemed to be snoozing. There were several lines where people were queuing up, so we randomly shuffled into one where we had to wait our turn to walk into the courtyard, which upon closer inspection was gated. I was slightly apprehensive, now that I was actually here. I would be petting a tiger up close and personal. What if it lunged at me or decided to take a juicy bite off my arm. I watched as the other tourists who had entered the courtyard crouched next to the tigers and posed for the camera and then were led by a bored-looking employee to the next tiger.

In case you aren't aware, this sanctuary started out as a Buddhist temple in Thailand's Kanchanaburi Province and was founded in 1994. The objective apparently was for it to be a sanctuary for wild animals, mostly comprising of tigers. One of my cousins refused to come inside, opting to wait out in the tour bus. Her reasoning was that she had read that the tigers were being mistreated and drugged, and she believed it because otherwise there was no way tigers would be so docile, letting people pet them without wanting to shred them to pieces.

I didn't think much of this because I figured if this was open to the public, it must be okay. And hey I was after all in a Buddhist temple that was a sanctuary for these animals and I had heard some stories about how the tigers were trained by monks so maybe that explained their meditative state. It all seemed legit and kind of cool.

When it was my turn to walk into the courtyard, an employee came up to me, held me by the wrist and walked me toward the first tiger. I noticed the animal was chained to the ground. It looked really docile as I apprehensively touched its back closer to its tail. The employee snapped multiple pics and then she caught hold of my hand again and walked me to the next tiger. Again I noticed this one was also chained. It finally dawned on me they were all chained and mostly seemed to be sleeping. I think one or two of the tigers seemed to rouse and shake their paws, rather feebly, but for the most part they lay still. Was my cousin right, were they drugged? The question popped into my head reluctantly. I mechanically smiled my way through the last few tiger pics, feeling awkward and stupid and unable to really admire these beautiful animals because I wasn't sure what was going on. I didn't find any satisfaction in petting a tiger and taking a photo or being led by my hand like an errant school kid who might run off at any moment, with tiger in tow. 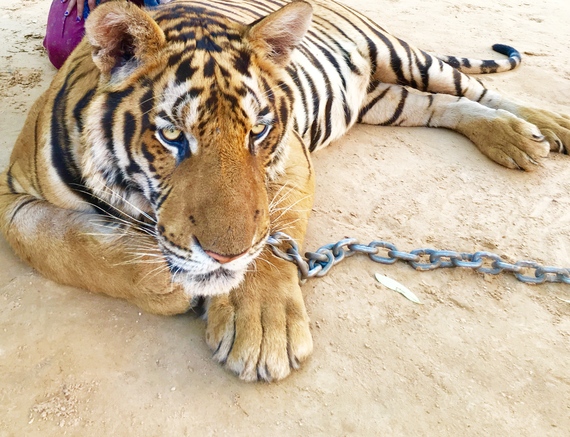 Walking out the courtyard I was waiting for my other cousin who was still inside with the tigers, when I spotted an employee standing around talking to the visitors. I approached him and pointedly asked him if these tigers were drugged. He was matter of fact and said no, not at all. He said they are given plenty of exercise during the day and that in fact we could stay and watch the next round of activity where the tigers would be engaged in playful combat. I needed another admission ticket for that and well I couldn't stay because my bus was leaving back for Bangkok. 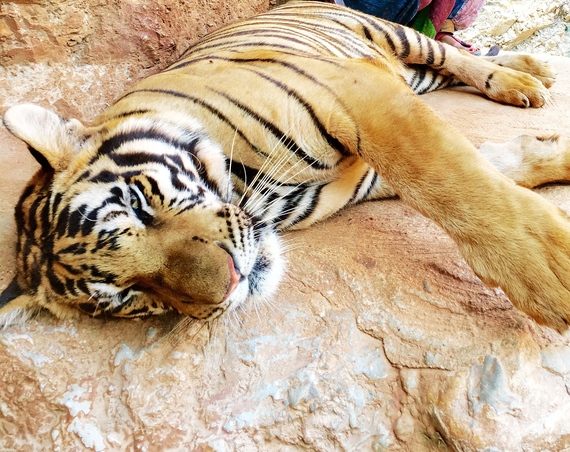 Fast forward to May, three months after my trip. Back in the United States I had virtually forgotten about this bizarre day trip to the sanctuary, my cousin and I both having decided this had been a boring and disappointing excursion. In May, headlines splattered everywhere in the news about illegal tiger breeding at the sanctuary and how police had found tiger cub corpses as well as numerous body parts from other animals preserved in the freezers. There were reports about wildlife smuggling. I was horrified. I had taken part in this activity, and helped support it by visiting this place.

Which brings me to the question of responsible tourism and the tourist. Being a seasoned traveler, I pride myself in knowing where to go and what to see. What I have to remember, is that just because an activity is open to the public and listed in a guidebook, it doesn't mean that it's ethical and legal. I'm not here to tell you about what's really going on at the temple, but rather to spread awareness that as world travelers we should approach some of these activities responsibly, and do our due diligence as we have a duty toward protecting and preserving our wildlife and natural habitats. For me the valuable lesson I learnt on this trip was that if there is even a frisson of doubt about the ethical nature of an activity, my responsibility as a traveler is to avoid supporting it altogether.

For more on Preethi's travels, check out at her blog at https://theeagertraveler.wordpress.com/ and Instagram.