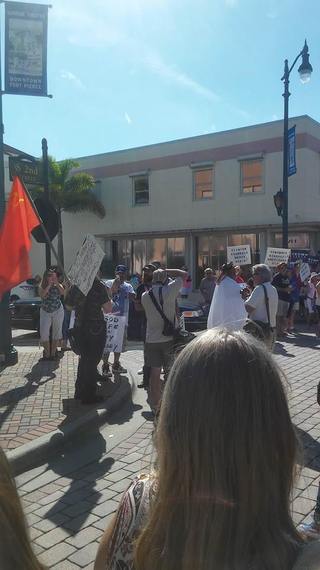 There are momentous days that are forever remembered by all Americans. These days go into the history books as moments that changed an entire generation and the course of history. June 6th 1944, December 7th 1941, July 4th 1776, September 11th 2001.

October 24th 1996 is not a day historically that most people remember. Nor should it be, it was just another day towards the end of a presidential campaign year; the setting of which was a half-dead rubber city in Ohio.

In my own life, however, this is perhaps one of the most important moments that I have ever lived. You see, this is the day that at ten years old I met First Lady Hillary Rodham Clinton in Akron and began my lifelong love of politics and history.

Now we are in yet another campaign year, and this sort of article is usually some campy love for a candidate written by a writer who is watching too many ads on television. My article isn't like that, I voted for Bernie, and Obama. I remember my meeting with Hillary fondly, however as I have grown older, my views and Hillary's have been at odds and I have voted for those she was running against.

Here we are in October of 2016. Hillary Clinton has the Democratic Nomination, and she just wrecked Donald Trump in the first debate, and second. The first woman President of the United States could be out there right now, campaigning across the country against this man who encourages his followers to attack those who disagree with them.

I have a ten year old daughter, she is the exact same age I was when I met Hillary as a boy. In this election I have watched the most misogynistic man ever to run for office say things that should forever disqualify him from ever being president, I have received death threats from his supporters who didn't like some of the articles I have written... I see Hillary's ads on television about how our children are watching, and it is true. My daughter is shy, painfully so. She had the good luck to meet President Obama in 2012, and while he spoke to her, all she could do was give a small wave to him, too frightened to even speak.

However, a few weeks ago she asked me why Donald Trump was pretending to be disabled and said it was mean for him to do that. She heard some of the things he has said, and asked me about them. What am I supposed to do here? I don't want to just regurgitate talking points, she should be part of the process, even if she doesn't fully understand it all. She has no interest in politics, but she does want to learn more. As a parent, all I can hope for is that the things that I am passionate about somehow resonate to my children, and maybe just maybe, I can teach them something.

I made the decision; I was going to show my daughter what a girl can do if she studies hard, overcomes adversity and failure, and prepares herself. Rather than just tell her what I think, I would let her hear it herself and make her own decision. So, on September 30th I drove to Ft. Pierce Florida to have her listen to Hillary Clinton and make her own decisions. And because it wasn't fair to let my daughter stay home from school, I also took my five year old son.

Political events should be educational, and fun. It is a chance for kids at an early age to see beyond their own lives and into how the country is governed. I have been attending political events my entire life, and in what I can only describe as the most awesome thing, I have taken my daughter to a few as well and she seems to have pride shine through the shyness.

What I failed to even consider was the toxicity of this particular election year. Rallies always have protesters, and that's ok! It is partly our freedom to protest and have our voices heard that make our country great. So while we waited in line for over 3 hours in the 90 degree Florida heat and I saw a few people walk past with Trump signs, I thought little of it. It's their right to be there too.

I think it was as we were nearing the front that the realization of how bad of a situation this actually was hit me. It may have been when I saw someone protesting the event while waving the Flag of the Soviet Union, the USSR flag with the hammer and sickle, or it may have been the middle-aged woman screaming obscenities as people waited to enter. It could have been the man dressed as a terrorist, or another who was covered in fake blood and also screaming obscenities. As we drew closer and closer, I was seriously debating on leaving the event as the chant of "Lock her up" grew louder.

I decided that I had taken my children out of school, driven an hour, and waited in line for 3 hours... I would have to explain to them what this all meant, but maybe it was important that they see this. Also, what would it show my kids if we left? I was afraid it would teach them that if someone is bullying you, you should run away. Which, let's not kid ourselves, is exactly what Donald Trump is.

My daughter was frightened, her eyes were wide behind her glasses as we drew closer. Protesters were literally five feet away from those event attendees and they were red in the face, eyes bulging, screaming into the faces of people. Several times I saw that the protesters crossed into the street and were physically pushed back by police while the waved their arms and pointed their fingers.

As we were in front of the protesters my daughter burst into tears as I heard a woman cursing loudly about Hillary Clinton. I tried to comfort her, and asked her if the people were scaring her and she shook her head and looked into my face. "What is on that sign?" she asked through sobs.

I wheeled around to see a woman in her 50's rubbing her eyes at me and making fun of my ten year old daughter and laughing, and behind her was a sign that I hadn't even seen. A graphic photo of a dead baby, chopped into pieces, discolored with death with the big printed words of ABORTION.

Resisting the urge to completely lose my mind on these people and give them what they wanted, I turned back to my daughter. What do I say here? She is ten, she is still ridiculously innocent. She doesn't understand the concept of sex, let alone abortion or a woman's right to choose. While freedom of speech is a right, as well as the freedoms of expression and the right to protest... is there also not a law about common decency? And what kind of person finds this behavior acceptable, and relishes in the terror of a little girl.

We entered the event, but my daughter didn't want to be there now. She was traumatized, upset, and there was literally nothing I could do to help her. I was still determined to try and make this a positive memory, but I could feel it all fleeing away from me like trying to cup water in my hands- and by the time Hillary Clinton came onto the stage, it was already over for us. As we left quietly, one of Hillary's campaign people shook my hand and thanked me brightly for coming, not paying attention or caring that a crying little girl's world was rocked to its core, which was unfortunate because as I drove home, I wondered how many other little girls felt the devastation that mine did. The memory of the first female President of the United States wrecked by those who oppose her.

The biggest pain of this event came later that night when my daughter told her grandmother "I know that it changed dad's life for the better meeting Hillary Clinton, but it is the opposite for me."

So, thank you Donald Trump for setting the example that it is ok for your supporters to attack those who disagree with them. Thank you for making it ok to terrorize and make fun of a ten year old girl. At the end of the day, while Donald Trump may not have said all these terrible things directly to my daughter, you have said them... and my little girl, instead of wanting to raise her hand and participate, now fears what will happen to her if she does.