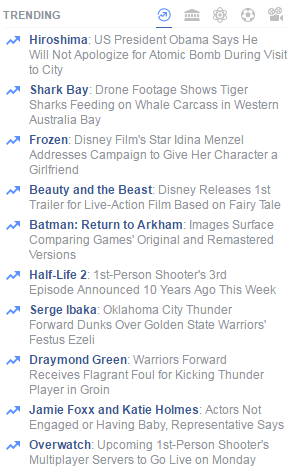 This was previously published on LinkedIn.

Conservative pundits have criticized Facebook over claims the social network has willingly been suppressing right-wing news. The scandal has grown so large that Mark Zuckerberg himself had to host the nation's leading conservative news chiefs, anchors, and bloggers in a closed-door meeting and to reassure them that Facebook is not going out of its way to silence them and their views.

Gizmodo's piece, aptly titled "Former Facebook Workers: We Routinely Suppressed Conservative News," goes into great detail about the contractors who were tasked with populating the trending list. The author, Michael Nunez, makes the case against Facebook for them biasing their event coverage through poorly supervised contractors with center-left political views. Most of the contractors hailed from "Ivy League or private East Coast universities" and that "Facebook management... was even aware of any political bias at work", the article notes. These curators having some level of autonomy to select new sources to form the basis of their trending topics creates the perfect storm for "censorship" to occur, according to the article. From Michael Nunez's post, although it isn't explicitly proven that it was Facebook's objective to eliminate conservative thought from being displayed in trending topics, we can conclude that Facebook's algorithm and processes to determine trending news isn't as neutral as we would have hoped it to be.

This conclusion begs the inevitable follow-up questions: So what if Facebook's trending topics widget is giving me biased news?

How is that any different from MSNBC, Slate and The Huffington Post mostly posting liberal viewpoints on their front pages?

How is that any different from Fox News, The Drudge Report and Breitbart doing the majority of their reporting on conservative issues?

I am not surprised at the fact that Facebook's trending topics module isn't neutral once you consider the main fact that these "news curators" were using their individual judgment in terms of which news sources backed the descriptions for topics -- if an individual news curator have liberal views or sympathies to left-leaning causes, it's not hard to imagine that their unconscious and/or conscious biases will influence where they pull their news source from. If there is a team of these news curators who share similar left-leaning/center-left political views, it's not surprising that no one individual is going to check one another or the group as a whole to ensure that the trending topics aren't completely skewed. Even if the scenario were flipped on its head and it turned out that Facebook was suppressing liberal news topics, viewpoints, and issues, I would have the same reaction.

If anything, we can with certainty place Facebook in the liberal media column seeing as they are not neutral as they promised to be.

Now, there are two questions that remain to be answered: with Facebook's enormous audience as its user base.

One, what is the threshold in terms of usual readers for any news site or media source to be objectively and neutral in its reporting? There is no threshold that exists where any news company has to reconsider its publishing and reporting strategy to fit the arbitrary standard of "neutrality" in the news that it presents to its readers. If we are even going to try and attempt to define a threshold, on what criteria would it be based off of? That's a debate in itself that may not ever be resolved. Even if we agree on a threshold, then surely news organizations across the political spectrum who meet this standard would be unfairly forced reconsider their own individual strategies on what to report on, which could affect their monthly readership and overall user base.

And two, have we, users of Facebook and social media as a whole, willingly given Facebook an extraordinarily amount of control over where we seek out information? The second question is more difficult to grapple with and has farther reaching consequences, but my answer is yes, we users of Facebook have willingly given the social media site nearly unrivaled influence in the journalism industry. When Facebook is becoming the top news source for Millennials in today's world, that signifies a major shift where people go to consume information, and more importantly, how they form their opinions and stances on particular issues. If anything, it may not be unreasonable to assume that Facebook may benefit from having their trending topics skewed towards liberal news sites, considering Millennials are heavily more liberal than past generations, and they form a core portion of Facebook's user base.

We ought to be reminded that by closing your Facebook tab, you don't have to be solely dependent on Facebook for our news needs. I know I'm not -- I rely on a variety of websites on the political spectrum to help inform me of my views and what is going on in the world. Everyone else who has access to the internet has the same opportunity to do the same -- your choice to pick conservative or liberal news to read isn't impeded by Facebook's dominant and ubiquitous trending topics widget.

A version of this article was previously published on Frederick Daso's blog. You can find out more of his writing at his personal blog: Millennial Aspirations.

P.S.: If you've noticed, I've linked to a variety of news sites within this article that range covers the political spectrum. More evidence that there are other sources of information out there than just Facebook.