Excerpted from THE FAMILY DINNER: Great Ways to Connect with Your Kids, One Meal at a Time by Laurie David with recipes by Kirstin Uhrenholdt. Copyright © 2010 by Hybrid Nation, Inc. Reprinted by permission of Grand Central Publishing, New York, NY. All rights reserved.

I would be remiss in writing a book about family dinner if I didn't include families who are dealing with divorce, myself included. Today half of all marriages end in divorce. That's an awful lot of family dinners in jeopardy. It's unfortunate that just as kids need rituals most, when they are the most fragile and insecure, a great stabilizer like family dinner is often the first thing to go. Lots of factors contribute to this: the pain of the empty seat (no one wants to sit there, and if they did they would regret it when the reprimand came: "But that's Dad's seat!"); the emotional wreckage of the remaining parent; the sadness of the kids, often masked by sullenness; the convenient mindless tempting escape of the television . . . the list is endless.

When marriages break up, kids need the comfort of routine more than ever. When life is suddenly unpredictable and scary, rituals come to the rescue doing what they do best, providing a sense of predictability and normalcy, stability and security, comfort and love. I speak from personal experience. All the rituals I had spent years establishing helped me and my kids enormously, and Larry, too. Continuing them sent the message loud and clear that although our family was changing, life would go on, routines would continue, dinner would be served.

The first month of transition out of my marriage is a complete blur now, but I do remember insisting on dinners as usual every night at six thirty with my daughters. No one felt much like eating, but that didn't really matter.

Soon after, Larry and I decided to try something a little unorthodox. It's called "nesting." A split couple move back and forth in and out of the shared house so that the kids don't have to. Larry got an apartment, but had dinner with the girls and stayed at the house every Monday and Wednesday night. I would leave right before dinner and stay at my sister's house nearby.

Nesting isn't something everyone can do; both parties really have to cooperate and have the resources to do it. Luckily for us, it worked: Rituals remained intact, bedrooms stayed the same, even Dad coming home two nights a week helped every- one ease into the change. Still, I remember a lot of brooding meals and awkward, forced conversation between bites. I also remember making a lot of pleading phone calls to family members and friends begging them to come to dinner to help relieve the tension and provide some distraction. Skipping organized dinners and letting everyone do their own thing would have taken some of the pressure off the kids and me, but only temporarily. I was desperate to get back to feeling "normal" as soon as possible, and the fewer things that changed, the better off we would all be. 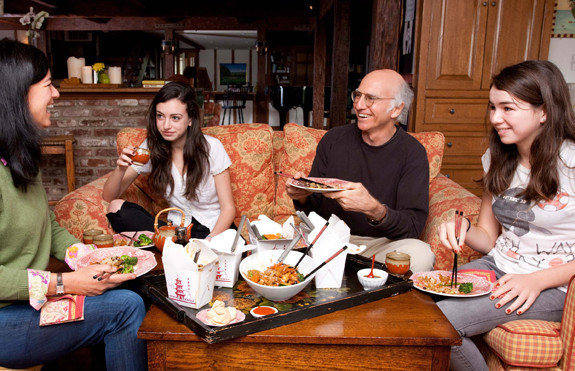 If family dinner had stopped, the lesson to my kids (and to myself) would be that we weren't whole anymore, that something was broken forever. I honestly didn't believe that to be true. The message I did believe, and the one our continuing dinners provided was--This family is changing, we are in a transition, but we are still a family! Not only that, but we are a family that is going to get through this and come out strong and connected.

Family dinner helped all of us weather the rough days by forcing us to deal with one another, by reminding all of us every day that we were still a family. Thank goodness for that toolbox of table games. When things got uncomfortable and no one was talking, I would toss out a spelling challenge, or play the Pet Peeve game. My new full-time job was to make sure that despite this change, my family didn't fall apart. Our dinner rituals, thank goodness, helped me accomplish that.

Then I took this concept one step farther. I had the notion (hope) that eventually I could even get my ex back to the table, with me sitting at it, for a once-a-month, dare I say once-every-other-week, family dinner. Crazy, you say? Maybe it was, but I was eager to try. I wanted a different divorce model for my kids. They had lots of friends who were from broken homes (okay, that is a crazy expression we have to stop using. Could we make people feel even worse than they already do?), and whose parents were in constant battle. I didn't want to put my girls through that. They were innocent bystanders and deserved better.

Furthermore, I wanted them to understand that just because the marriage ended, it didn't mean you no longer care about the other person or wanted them cut out of your life completely. I believe it's possible to have a loving divorce. It takes an enormous amount of courage to change your life. No one wants a marriage to end; no one wants to have that heart-crushing conversation with his or her kids, but it happens.

Most parents going through a divorce want to do what is best for their kids, and that is always, always going to be an amicable split and co-parenting arrangement. I wanted an open line to my girls' dad so that we could be in sync as we headed into those turbulent teen seas. I wanted access and a united front for all the important decisions and issues looming ahead. I wanted both homes to have consistent values and rules if possible. I wanted to disarm my kids' potential bag of tricks. You know, the game where they play one parent against the other: "But Dad said . . ." or "At Dad's I can . . ." I wanted communication and transparency.

Ultimately, I wanted Larry and me to remain captains of our family ship, a perfect analogy coined by parenting guru Susan Stiffelman (Parenting Without Power Struggles). She says, "Kids need us to be the captain of the ship in their lives. This isn't about parents being in control; it's about being in charge. When we refuse to deal with reality as it is we leave the child without the sense of comfort that comes from knowing he has someone capable of getting him safely through whatever crisis he might be experiencing. When we fully inhabit the role of captain of the ship of our family, we set the stage for providing the quiet and comforting authority that our children so profoundly need." Big agenda, I know, but I have taken on big challenges before! Family dinner would be the vehicle to get me there. Slowly, I started to ask Larry if he would have dinner with the kids and me on one of my nights. I received quite a few emphatic nos and then, lo and behold, I got a yes.

That first dinner was exactly what you can imagine: awkward and miserable, but mercifully quick. The girls downed their food in one gulp and hightailed it out of the kitchen with excuses of showers and homework. Larry left pretty quickly, too. Time was on my side, though. One meal turned into several, and soon enough we got back to our old family dinner ritual of "If It's Sunday We Must Be Eating Chinese Food." I would order the favorites and he would do the pickup on his way over to the house.

Eventually, the meals got a little longer, a little more relaxed; one night Larry even stayed for a movie afterward. Within the year, we branched out and started including local restaurants--still mostly Chinese, but at least we were out of the house! To this day I enjoy the surprised look on people's faces when they recognize Larry and realize he is having dinner with the kids and me! I'm sure one day I will read a gossip item saying how Larry was out to dinner with a woman who looks just like his ex-wife! Ha. It is his ex!

I wanted a happier, more inclusive divorce than what is generally the norm. I fought for it, but I couldn't do it alone. It took both parents and two great kids and a hexagon-shaped table, all the interactive recipes in this book, and all the word games that forced us to laugh even when we were hurting. During the most challenging time in my life, family dinner provided the space to reconnect with one another, to shore one another up, to remind us that we were okay. The shared meal was the path in. Amen.

TO MAKE 24 BROWNIESPreheat the oven to 375 degrees. Grease a 9-by-13 pan. Over low heat, melt the chocolate and butter in asaucepan. Set aside. Beat the eggs, sugar, and vanilla at high speed for 10minutes in a mixer. Fold in the chocolate mixture, flour, and salt until just mixed. Stir in the nuts and lastly, the orange zest. Pour into the prepared pan.Bake for 35 minutes or until a toothpick comes out clean. (Don't overbake.) Let cool at room temperature.

This can be served slightly warm with ice cream. It's delicious with berries, too.