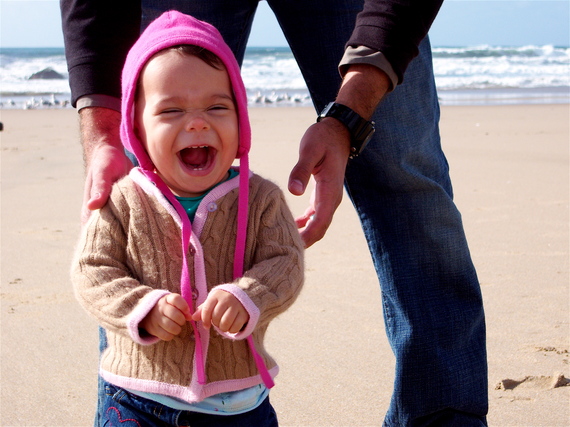 My family in many ways is a walking billboard for ambiguous ethnicity. My 7-year-old daughter has brown curls with hints of gold, large almond shaped blue-green eyes and brown skin. My mop-topped 1-year-old is her contrast with dark hair, dark eyes and paler skin. Depending on where we are geographically, my husband is often confused for Indian, Middle Eastern or Ethiopian. He is actually half Black and half Ukrainian, born and raised in New Orleans. I have dark hair, blue eyes and freckled skin with a yellow undertone as if my ethnicities are having a melanin battle and my Scottish side is dominating my Colombian genes. (My hope is that one day all my freckles will join forces and I will finally become the shade I feel is my rightful inheritance from my mother's side. It hasn't happened yet.)

Growing up two ethnicities simultaneously allowed me to be part of, and not fully a part of, separate worlds. When I went to visit family in Colombia, I was included in many ways, but people frequently pointed out, because of my manner and even style of dress, that I was so "gringa." It may have been meant as a simple observation, but I took it as an insult. In the U.S., where I was raised, I felt surprised by people's ignorance on Latin America. I recall that my fifth grade teacher once talked about America in class and I asked her, "Which America?" After all, there is north, central and south. It turns out she did not count the latter two, and Canadians would be shocked to learn that their close northern proximity bought them no favors in my teacher's eyes. The way she said, "There is only one America!" trilled of proud nationalism, which is okay, but it also rang of something else. I couldn't wrap my 10-year-old mind around the idea that she intentionally shut out the rest of the world or at least had an unabashed sense of superiority.

One limitation, I think, in connecting to another's experience is whether we see the other person as self. We are more apt to relate to and want to help out someone who reminds us of our mother, father, sister or brother. You see this in the Nordic social democracy model as well as other homogeneous nations. (You also see an increase in conservatism as nations become less homogeneous.) There isn't the same struggle to etch out what is yours and what is mine because we are all the same. This is a complicated issue, so I don't want to flatten it or make it seem like this is my area of expertise, but my innate sense is that we (humanity) tend to, consciously or not, want to protect and help those we see as like. With a mental compartmentalization of who is different, we often turn our backs on those we don't see as self, or worse, we find ways to overtly exclude them. Mostly though, we live in a bubble filled with our own personal experience and struggles, with little time or energy to focus on those of someone or somewhere else. Sure, we feel passing moments of sympathy, but we don't often feel moved to take action.

Living in multiple worlds, none that I entirely fit, isn't a deficit. Instead, I feel it has allowed me to see outside the box. I am no one thing and therefore no one culture or experience defines me. Yes, at times, particularly the conforming high school years, I didn't always appreciate my difference. Soon though, I realized that not fully fitting in with any one culture was actually a benefit to me. In living a less defined identity, I don't have an over attachment to being any one culture and I don't have a specific self to recognize. Instead of it resulting in me perceiving no one as self, it has allowed me to perceive anyone as self. I find this liberating and I have spent my adult life as a journalist trying to shed light on experiences that maybe wouldn't ordinarily register with people because they appear foreign or remote. In particular, I focus on marginalized populations that often seem forgotten or ignored.

For years, I have researched and written about human trafficking, focusing on marginalized populations and their vulnerabilities to exploitation. In my research I came across the intersection of fashion, human trafficking and labor exploitation. It gave me a window into the conditions garment workers face and it made me begin to connect the dots on my own purchases. The cute dress I liked that cost less than $10 suddenly led to questions. It no longer represented a good bargain but perhaps a high cost to someone, the person who made it.

When the Rana Plaza factory collapse in Bangladesh happened in 2013 and more than 1,100 garment workers were killed and at least 2,000 injured, it didn't just register to me as a passing tragedy but instead further highlighted the garment worker experience. Suddenly, the brands I wore everyday were in the spotlight and I saw the conditions men, women and children faced for a mere fraction of a living wage. Garment workers in the nations that are primary apparel exporters to the U.S. typically don't make enough for basic needs like food, rent, clothing (ironic, I know), transportation, let alone healthcare or education. The photos of mothers and children weeping for their daughters and mothers that died in the Rana Plaza factory collapse made my heart heavy. These aren't images people want to see or even conjure in their imaginations, and I get that. In a world of social media we are inundated with causes, requests and stories of loss. It can make us oversaturated with information, and it can feel remote and make us feel helpless. It's terrible, many of us think, but what can we actually do? My answer was to change my shopping habits. For years, I had focused on what I put in my body but not really what I put on my body. In my research, I collected so much information on ethical fashion that I soon realized it could be a true resource for people who wanted to shop responsibly but didn't have the time, or maybe the desire, to vet designers and products. Using this information and my designer contacts, I founded Good Cloth, an ethical fashion retail shop. I want people to feel hopeful, not helpless, and understand how we spend our dollars is the easiest way to make changes for workers and send a message to brands without transparency that they need to step up their game. After all, people just aren't that different, regardless of race, ethnicity, language or nation-of-origin. We love, we feel joy and loss, and we are all part of the same tribe, humanity.