"Your dad is deploying to Afghanistan. He'll leave in a week."

I was completely unprepared for these words on a sunny day right after swimming lessons with my friend. Soon my dad was gone. I was 13 years-old and for a year, I lived without my father.

I Skyped with my dad regularly. So regularly in fact that at a point, I wouldn't care about missing out on a Skype conversation to finish homework.

I was old enough to know where my father was. I knew that he was at war. I didn't believe though, that my father was actually fighting in a war zone. I never really believed my dad was in any real danger.

The worst thing about my father being deployed wasn't that I worried about his safety constantly, it was that I forgot what his voice really sounded like. All I knew for a year was the crackly voice I always heard on Skype.

I'm not sure if I was simply too young to grasp what my dad must've been going through when he went to war. Perhaps it was simply impossible for me to imagine my father being anything other than the man who I ate dinner with every night. 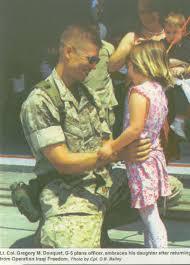 A movie came out on December 14 called American Sniper. In this movie the audience follows Chris Kyle, the best sniper in American history, who had numerous tours in Iraq. Kyle was a family man with kids and a loving wife. I've seen plenty of war movies before, but I've very rarely seen a war movie about a war that my dad has fought in. In American Sniper I saw a normal man. A man who acted the same way with his children as my dad acts with me and my brother.

I saw what my mom must've gone through while my dad was deployed, and after he came home. I didn't think that my dad was affected by war -- that he brought the war home with him.

I never saw more than small pet peeves after my dad returned from deployments. After he came home from his year deployment in Afghanistan, he became extra strict about being prepared for everything. Always having music notes for piano lesson, gloves when its cold out. My mom said that in war, if you weren't prepared you could die.

After I saw American Sniper, a film where the loving father comes home a shell of his former self after a deployment, I asked my mom if my dad had ever come back broken after a deployment. In the movie, Kyle hides his inner conflicts from his children. For all I know my dad could have done the same to me.

My mom told me about the first time my dad came back from war after they had married, just for a few days in the middle of his deployment. It was like having a ghost in the house. After the Iraq invasion, the colors in San Diego where we were living were so bright that they hurt his eyes after so many months of browns and grays. My mom was lying on the bed with my dad, and she could count all his ribs. That was how we found out my dad has a floating rib.

My mom's friend, Penny Bolden, told me how her experiences after her husband returned from deployment perfectly mirrored the scenes shown in American Sniper. After a deployment, she asked her husband: "What about us, what about your family, why aren't we first? Why aren't we before your country? If you go again we might not be here when you come back." His response mimicked Kyle's, "I am doing this for our family."

I take for granted how happy and supportive my dad is today. He has gone through more than I could ever imagine. My dad has helped so many and fought so much. On behalf of all military brats, I want to thank my dad, and all parents who have gone through military service. I want to thank you for fighting for us, and for being amazing parents to us despite whatever horrors you've had to fight through.

I hope everyone in America sees American Sniper so they can know what families like mine go through. What people like my dad fight for.