My dad had one name for all five of his children: "son." I'm not sure what he would have done if one of us had been a girl, although my brothers often debated with me the assertion that there were no girls among us. Who could blame them? While they were busy reading the sports page and farting, I was eagerly helping my mother understand the importance of proper furniture placement to create engaging conversation areas.

"Now, see the way this sofa is pushed up against the wall? It says "doctor's office waiting room." If we place it like so and cozy up these chairs, then what we've got is an arrangement worth talking about!"

My father would stare at me, speechless. But thinking about it now, he really didn't have much to say to any of us. When he came home from work, he would plow through dinner in five minutes, gulp down a glass of Scotch, and smoke a pack of cigarettes. He reached his daily word quota during the work day.

"Son," my father would say.

"Get your dad the newspaper." 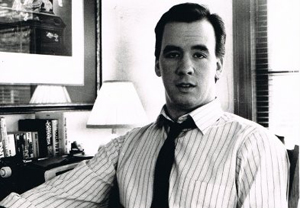 Starved for his affection, we'd punch each other in the arm and run to be the first to get it. From an early age we figured that his daily affection quota was also being filled elsewhere. When I was 12 my mother came into the living room sobbing and said, "Your father wants you boys, but he doesn't want me anymore." I remember feeling devastated, but mostly I remember feeling surprised that he wanted me.

I soon learned that what he truly wanted was women, and lots of them, something I couldn't quite grasp. They were blonde, brunette, tall, short, shapely, and slim. And there was always one on the side waiting to replace the current one. At my wedding there were two ex-wives, two ex-girlfriends, and a current girlfriend on his arm. When I exchanged wedding vows, I also vowed never to be like my father.

For 20 years I did what my father could not. I stayed married and never had an affair. Blessed with two daughters, I lavished them with affection. It was all going according to plan. But as time wore on, my word quota began to be met, until there was nothing left to say but "I'm gay." When my marriage ended I was broken, like my father.

I picked up the pieces and tried to reassemble them into something attractive. I attended a gay father's support group and was picked up by a man at the first meeting. The fact that he collected vintage washing machines and proudly displayed them in his basement really should have alarmed me, but I decided to find it cute and quirky. The fact that he attended a gay father's support group and was not actually a father? Fine by me. What really should have alarmed me was that I was too fucked up to interest even him for very long. It was over within a few weeks.

And then I met Paul. On our first date, he pulled out three perfectly crisp photographs of his children from his wallet and placed them on the table. I opened my wallet, flipped through old receipts, peeled the sticky photographs out, and proudly displayed them. It was the first time all of our children would be together in one room. The second would be at our wedding.

The more time I spent with Paul, the more I realized that he was the father I wanted to be: self-confident, loving, patient, funny, and authoritative. Eventually, I became that father. It was no more evident than the day I received a text from my daughter: "I want you to know that you are my hero. Sis and I have been talking and we both want to marry someone like you or Paul."

This Father's Day I'll reflexively think about giving Dad a call and then remember, "Oh, he's gone." Deep down, I know he loved me. I just wish he could have learned what Paul taught me. In order to properly love your children, you have to love yourself.