On Friday, President Obama signed a bill awarding the Congressional Gold Medal to the airmen who participated in a stealth attack on Tokyo on April 18,1942. It was a sorely needed response from the United States after the Japanese bombed Pearl Harbor, dealing a severe and almost fatal blow to our Pacific fleet. My Father was one of the airmen who became known as the Doolittle Tokyo Raiders of the 17th Bombardment Group of the Army Air Corps. 80 men volunteered for "an extremely hazardous mission," without knowing the target, location, or the assignment. It was a suicide mission, with capture, torture and death looming on the Pacific horizon off the shores of China and Japan. The men trained at Elgin Field, Florida, using white lines marked across fields. The objective was to learn to take off using the shortest distance possible.

Medium bombers had never been launched from a carrier before. After the USS Hornet was discovered by a Japanese fishing boat, the fliers launched 170 miles earlier than planned in order to preserve the surprise aspects of the mission. The fliers knew that there would not be enough fuel to land at prearranged rendezvous points in China. In fact, not one of the 16 B25 Mitchell bombers reached the Chinese landing sites.

Eight men were captured; two died in the crash, one of them from my Father's plane, the Number 3 aircraft. Of the eight men captured, three were executed. My Father's plane crashed in China and his parachute became hung-up on a cliff where he drifted in and out of consciousness until some friendly Chinese cut him down, nursed him and helped reunite him with other downed fliers who were eventually smuggled out of the country.

This is the story, told by my mother, to myself and my five brothers and sisters. It was family lore, part of our history as a family, and my Father never talked about it except on one occasion when the Chicago Tribune wanted to do a story on his role in the raid and he had to get a suit and tie for a morning news show. My baby brother was still in diapers, and to us kids; it was an interesting adventure to have a reporter and photographer in our home.

We would sneak into his closet and find his old uniform and bomber jacket and silk scarf and play "dress up." The most mysterious item was his wool flight suite which had patches meticulously sewn over places where shrapnel tore the fabric. Over time, we realized that those scars in the wool exactly matched the scars on my Father's body. 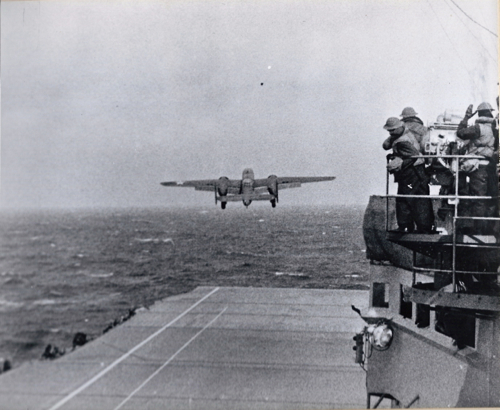 Take-off from the deck of the USS Hornet of an Army B25 on its way to take part in the first U.S. air raid on Japan (Photo: Lt. Charles Ozuk collection)

I thought that every man must have a crater where a rounded calf muscle should be, and that a bunched scar over the base of the neck was just something that happened in war. It was only upon reading my Father's service record after his death that I realized the extent of his fractures and wounds, and marveled that he ever came out of combat alive.

How would Dad feel about this Congressional Gold Medal? He would be quietly proud, but would be horrified at any personal publicity. His funeral wish when he died at 94 was absolutely no military funeral. He wanted a quiet service and to be buried at a Catholic cemetery in Castroville, Texas, next to my mother. His medals and decorations, including the Distinguished Flying Cross, and the Chinese Army, Navy, and Air Corps Medal, Class A, 1st Grade were never on display in our home, nor would he talk about them. He was simply "doing his job," end of story. 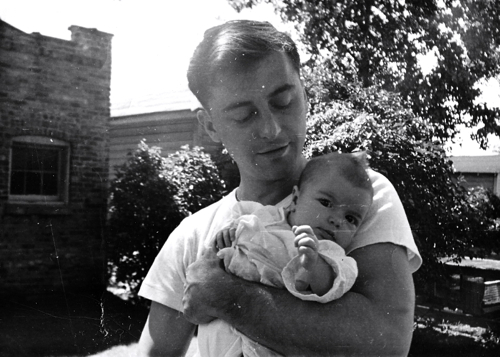 War heroics remained part of the past for Dad, but he was a true hero to the neighborhood kids, who would gather on our front steps every Friday evening in the summer months, while "Mr. Ozuk" would walk to the candy store and bring back vanilla Dixie Cups for all.

His workshop was a magical place, for me, his oldest daughter. It was there that he taught me how to solder broken wires, use a vise, and distinguish one vacuum tube from another as he constantly tinkered with neighbors' broken television sets. He worked as an electronics engineer at Motorola until he retired.

I learned how to measure, what the difference was between a millimeter and an inch, and how to use every tool on the workbench.

What defined me, in the end, were his instructions on map reading and navigational skills. He was the navigator on Plane 3 and it was his duty to know these things. He taught me how to recognize the North Star, how the constellations marched across the sky, and how to chart a course using a protractor and compass. Latitude was different from longitude and he showed me all of these things on the navigational maps he brought home from the war. A blue binder contained all of his notes from the training at Elgin, and he would have me read over them from time to time when I did not understand exactly what he was trying to teach me.

The instruction stuck. I excelled at science but became a writer. I love the ocean even more than Dad did. I wonder what cemented his love of the sea? Was it those days and nights on the USS Hornet when the water and the constellations were his only constant? Did the sea bring him comfort as he waited to face an uncertain future? I watch the archival footage of waves crashing over the bow of the USS Hornet as the B25s lumbered off the deck and wonder what he could possibly have been thinking. Knowing Dad, he was probably totally focused on the task at hand. I had never known him to outwardly show fear or anxiety.

I taught my daughter about the night sky and how it was your friend if you knew how to understand it. To this day, nature and stars are my Father's legacy, passed on to his granddaughter.

Yes, my Dad was a hero and certainly worthy of this Congressional Gold Medal. But he was so much more than medals and what history will record about him.

The recent ceremony and news about the Raider's prompted me to go through some of the letters he gave me. In his last days, he was sincerely worried about the future of the country that he risked his life for. He was never one to talk politics, but I remember with a smile that AlJazeera became the only news outlet he felt he could trust completely.

Raider groupies were constantly writing to him and he always did his best to answer, taking precious time from his later years to answer strangers with mercenary intent. Now, they are selling his autograph on eBay, with no realization about who this man, my Father, was.

Here is the text of a letter he asked me to edit shortly before he died. I did not change a word.

The price of freedom and liberty is high, as the sacrifices of our men and women on the beaches of Tarawa, Normandy and Salerno can attest. We (our government) should always try to find the solution to the enigma of world peace. As we all know, an effective armed forces is the best guarantee of the peace. Upon visiting our military installations, I am always impressed by the enthusiasm and the dedication of the men and women who are serving their country. This observation convinces me that there will always be man and women, as there have been in the past, who will come to the defense of their country whenever its freedoms and liberty are threatened.

I miss him every day and when I find myself navigating uncharted emotional seas, I ask him to be my navigator and protector and remind me that nature is my friend and that the stars are shining brightly above me. I wander to the sea for comfort and always find him there.

Dad. I trust you are not chagrined that I wrote about you. I never wanted to trade on who you are, but I do want people to know you are much more than this gold medal.