My father's red wooden bat stands propped up in one corner of my office. He died on April 1, 2007, but it's still positioned as if ready for him to one day walk in and pick it back up. The paint is faded and it's on the verge of splintering in spots.

By today's standards, it is toothpick thin -- almost like a toy -- but it was gigantic to me 40 years ago. 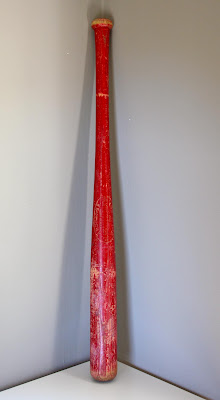 I keep my father's bat to remind me of two of my father's most important lessons -- one good, one bad and I'm not sure he intended to teach either one. He certainly wasn't conscious of it if he did. It doesn't matter, though, I learned them just the same.

They shape how I have built my law firm and how I relate to the people in it.

Lesson 1 - The Importance of Balance

Every Sunday morning, spring through summer, my dad played softball on one of the fields behind my elementary school. My sister and I would walk up to the school at about 11 o'clock as his game was winding down. We'd watch the last few pitches and, after his friends had left, he'd play ball with us. Then we'd walk home for lunch.

It was all as unhurried as it sounds.

My father was a lawyer and he ran his own firm. At its height, it was a four-employee operation, but more typically it was just my father and a secretary. If work didn't get done, he didn't get paid. And there was no one but my father to do it.

But still, we went to the beach for vacation just about every year; he came home for dinner with the family, and played unhurried softball with his friends and children. He measured success by how much time he could devote to what he loved.

My father knew the importance of balance.

I cherish those Sunday mornings and their memory reminds me that I cannot let my practice become all that I am. That time with my family cannot become a stepchild to the demands of my business. And that regardless of the pressure of retirement, saving for college and a thousand other life expenses, my firm will never cause me or anyone associated with it to become a six-day-per-week, 2,000 billable-hour slave.

Instead, I have followed his example by taking time away from my firm to teach at a local university. I have taken time to write. And on Father's Day, I will be departing for an almost unheard of two weeks with my 16-year-old son as part of a 13-member crew on an 80-mile trek at the Boy Scout High Adventure Philmont Ranch in New Mexico.

It's been a long road, but I am finally learning the lesson of balance my father taught so many years before.

Lesson 2 - The Importance of Planning

As I mentioned, my father died on April 1, 2007. Shortly afterward, I found myself going through paperwork from his practice, trying to tie up the loose ends of his business. Among them, I found an engagement letter dated March 1, 2007. He had taken on a new client exactly one month before he died. He was already pretty far gone with leukemia by that time, and all but the most fervent deniers would have acknowledged that he faced the coming end of his life. Yet still he was working to sign up another client.

Why would he do that?

Some would say that he loved what he did and to give it up would mean, well, giving up. But that's not the real reason.

The real reason was that he did not feel financially secure enough to cut the strings to his business. He was 74 and, if he had survived, would not have had the financial stability to retire. He had to keep working until almost literally on his death bed.

Ira J. Wagonheim was a great father, but a poor planner and, here, I refuse to follow his lead.

He never stopped to envision his future and work his way backward to figure out exactly what he had to do this year, next year and the year after that in order to attain his goal.

I keep his red bat to remind me that relaxation is not just something to squeeze in on a Sunday morning, but that it is also something to work toward in a retirement my father never took the time to envision.

My financial planner knows the lessons of the red bat. So does my accountant and each of my employees.

Now you know them too.

Lawyer, writer, educator, and strategist. Counsel to innovators and a firm believer in the establishment of core values as your north star.