What is the allure of gothic fiction? Many readers are familiar with this form of melodrama that originated in the 18th century from the dark imaginations of such writers as Horace Walpole and Ann Radcliffe. Replete with ruined castles, underground labyrinths, ghosts, murders, family secrets, kidnap, incest, rattling chains, mad monks and [insert your favorite clichés here], gothic romance - although it's taken a back seat to crime thrillers and other more modern genres in recent times - survives to this day and still keeps a hold on the popular imagination.

My choices are mainly classics. There are so many novels that deserve to be chosen, but I can't, simply because I haven't read them all yet. Some are piled beside my bed, waiting! (Hello Shirley Jackson.) What's the attraction of scaring ourselves, when we could be reading about, for example, fluffy kittens or how many cigarettes Bridget Jones has smoked today?

Everyone has nightmares. And there is so much to fear, all around us -- some imaginary, but much of it real. Our fear of death is rivaled by a worse dread -- what if the dead came back from the grave? Fear of dirt, illness, imprisonment, of distasteful liaisons such as incest, of ruin both material and moral. Fear is a survival mechanism, yet terror can also evoke a response of pleasurable excitement in the brain (I can think of no other reason for bungee jumping to be so popular...).

I believe vampire stories are a special case. If a vampire attacked you in your bedroom for real, it would be utterly horrific! And yet in the fictional world, it's different. Vampires are paradoxical creatures - they can represent things we dread, such as the aforementioned dead rising from the grave, but also things we desire such as immortality, eternal beauty, power over others. A vampire is a monster with whom who you could have a civilized conversation, perhaps even a relationship of some kind. They bring an erotic undercurrent that adds an extra, thrilling edge to the narrative. And, in my Blood Wine series ("A Taste of Blood Wine," "A Dance in Blood Velvet," "The Dark Blood of Poppies"), I've found them ideal to explore all kinds of moral and psychological dilemmas from both the human and vampire perspective.

Reading and writing gothic literature gives us a safe outlet for all our secret terrors. How deliciously horrifying to read about someone else's wild adventures and be grateful it isn't happening to us! To wonder how we would cope in their place, weep when evil triumphs or cheer when they escape. As a friend of mine once said, we're exploring the Dark Side from the safety of the fireside.

Why do we need to dig into these terrors? Because they are there. And if they aren't, some authors are determined to put them in our heads on purpose, as if on a personal mission to make sure we never sleep with the lights off again.

Freda Warrington is the author of the Blood Wine series. 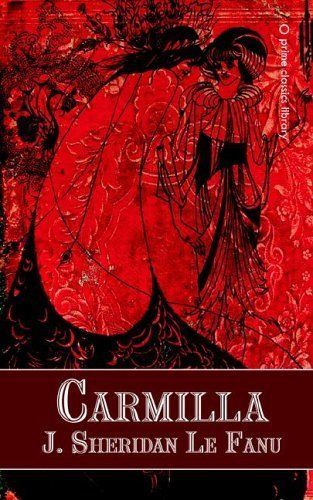 1 / 7
"Carmilla" by J.S. LeFanu
My first three choices represent the main influences on my own desire to write about vampires, and chief of these is "Carmilla" – a novella that in turn influenced "Dracula" itself. So often in vampire books and films, the vampire is no more than a cardboard monster to be hunted down and killed. Carmilla is an unusual (and very early) example of a vampire who is attractive, emotional, articulate, passionate, likable, vulnerable – a very human creature, in other words. There was a relationship between her and the female narrator – friendship with sensual overtones of homoeroticism. I fell in love with the humanness of Carmilla. How disappointing that she must be staked!