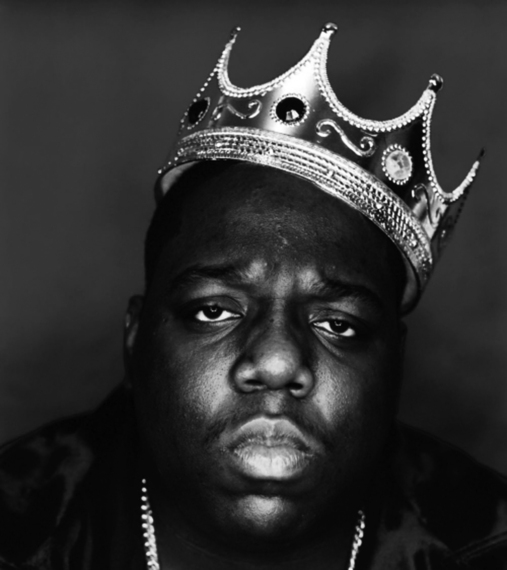 The Notorious B.I.G. famously photographed in a crown.

It has been 19 years since the death of rap legend Christopher Wallace. He rapped about the life of a street hustling, crack dealing, playboy; about blunts and broads--and sex in expensive cars.

Christopher George Latore Wallace,and better known better known by The Notorious B.I.G, Biggie, or Biggie Smalls, was an American rapper, born May 21, 1972. Biggie was the face of East Coast rap, representing Brooklyn, New York. Biggie became a drug dealer at a young age, as indicated in his song "Ten Crack Commandments." At 17, Biggie was arrested for selling crack cocaine, spending nine months in a North Carolina prison before making bail. This was a turning point in his life, as he rose above his drug dealing days and joined a crew called the "Old Gold Brothers." After a tape of his landed in the hands of Mister Cee, a well known DJ, Biggie was featured in the hip-hop publication, The Source.

The article caught the attention of Sean "Puffy" Combs, a young producer at Uptown Entertainment, a New York based label which specialized in hip-hop, rhythm, and blues. Combs decided to split off from Uptown in order to start his own label, Bad Boy Entertainment, bringing Biggie with him. After befriending Combs, better known by his stage name Puff Daddy, Biggie started experimenting with music on his own, releasing his debut album Ready To Die, which told the story of his life before and after his ascent into fame through rap. The record went platinum and Biggie was named "Best New Artist," "Lyricist of the Year," and "Best Live Performer", all within the same year. 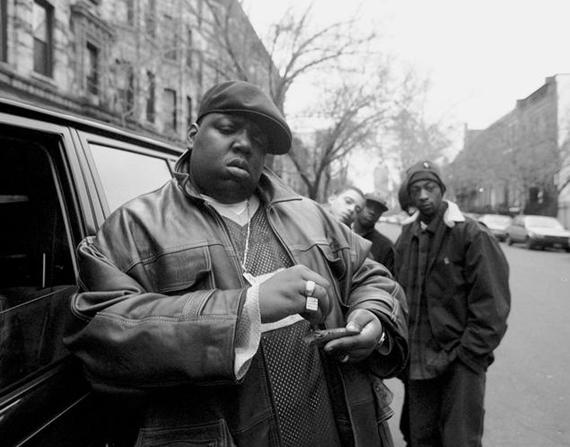 In his lifetime, Biggie often bragged about being harder and tougher than everyone else. His lyrics, however, tend to evoke a kind of delicate innocence. It is often forgotten that Biggie was still a child when he rose to fame. In his track "Sky's The Limit", he raps:

"His crew's your crew, or they might be next
'Look at they man eye! BIG, man, they'll never try.'
So we rolled with 'em, stole with 'em.
I mean loyalty: n**gaz bought me milks at lunch.
The milks was chocolate; the cookies, buttercrunch."

On this track, Biggie is nostalgic about chocolate milk and cookies--which serve more as a metaphor for his innocence than as a memory. The Notorious B.I.G., as hardcore as they come, the spinner of murder rhymes and playboy fantasies, despite his hefty braggadocio, made himself unequivocally vulnerable. "Sky's the Limit" discusses his past, highlighting the loss of an innocence he was unaware he ever possessed.

Some consider Biggie's music to be somewhat superficial and faceless, due to his constant mention of sex and material things. For example, in "Gimme the Loot", Biggie rhymes:

As seen above, Biggie often uses sexual symbols to make connections between his lines. Biggie's tracks leave you with a sense of respect for his profoundly astute and flawlessly executed rhymes. Under his bravado, there remains a rather ethereal core--an oxymoron that inevitably allows the hidden metaphors to serve as the quintessential representation of both the soft and hard dimensions of his music. In addition to powerful lyrics, "Biggie was a master of the flow," mastering "all the hemispheres of the music". Biggie always rapped with emotional honesty. In the book How to Rap, Guerilla Black describes how Wallace was both able to "glorify the upper echelon" and "[make] you feel his struggle". Biggie is best known for his ability to tell a story through music. He was an artist in every respect: using his audience as a canvas, his mind as paint, and language as the brush. 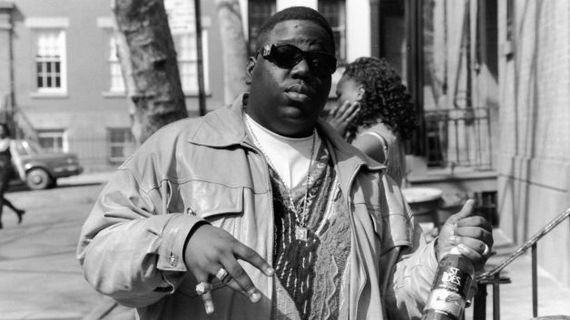 Tragically, no amount of success was enough to erase history. Biggie's troubled past and gang affiliations proved fatal when he was shot and killed on March 9, 1997, at the age of 24. Sean Combs and Biggie's wife, Faith Evans, wrote the song "I'll Be Missing You" in response to his death.

Biggie's background was Jamaican--both of his parents were born and worked in Jamaica before moving to the United States of America. Listening closely to Biggie's rhymes, you will find it to be satiated with Caribbean dialect and Jamaican slang. Some notable phrases include "bloodclot crying," and "lamb's bread" to describe marijuana. Biggie's father left when he was two years old, which explains the negative rhymes about his life as a fatherless child.

Biggie's mother, Voletta Wallace, nicknamed him "Chrissy-Pooh" as a child, after Christopher Robin from Winnie the Pooh.

Biggie had planned to open a restaurant that served Jamaican soul food in his hometown, the Brooklyn neighbourhood of Bedford-Stuyvestant. He planned to call it "Big Poppa's."

Biggie's mother claimed that the rapper was a straight "A" student growing up, with dreams of becoming a dentist or graphic designer before becoming gang and drug affiliated. He was a gifted drawer and won multiple academic awards in middle school in his favourite subject, English.

The name Biggie Smalls came from a 1975 movie called "Let's Do It Again." In the movie, there were a group of gangsters led by Biggie Smalls (Calvin Lockhart), hustling a boxer. When Christopher Wallace chose Biggie Smalls as a rap name, he was sued by Lockhart and forced to change the name to Notorious B.I.G.

Biggie was Lil' Kim's lover and mentor, despite being married to Faith Evans. In "Would You Die for Me", Kim raps:

"If I fuck another nigga, don't mean nothing
B.I.G. is in my heart from the start
Whether broke or rich, I'm a stay his bitch
Chicks who used to be around, where they at now?
(See I don't care bout them other broads)
B.I.G. kept it real with me, and that's that"

Biggie ghostwrote many lyrics for female rapper and paramour Lil' Kim. Biggie even rapped the line: "got buffoons eating my pussy while I watch cartoons."

You can hear Biggie receiving oral sex on the album "Ready to Die" at the end of the track "Respect".

Juicy was Biggie's least favourite song on Ready to Die, yet he still chose it as his lead single.

Biggie had worked on "Life After Death" for a full 9 months before it was released.

Biggie's two favourite rappers were Jay-Z and Too $hort. Biggie used to record songs and play them for Jay-Z in order to get feedback from him.

Biggie's original plan was to the be the biggest drug dealer and boss of New York City. He had dreams of being Tony Montana.

Biggie's longterm plan was for all members of Junior Mafia to develop into solo artists. Biggie planned to retire from rapping in 2000 and become Chief Executive Officer of his own label.

The song "The What" earned its name from Biggie and Method Man's initial reaction to the beat. They both asked, "what the fuck is that?"

Biggie was a fan of all rap, East coast or West coast, mainstream or underground.

King of Pop, Michael Jackson, worked with Notorious B.I.G. for his 1995 track "This Time Around."

Biggie and Puffy have identical tattoos of Psalm 27 on their arms, which reads: 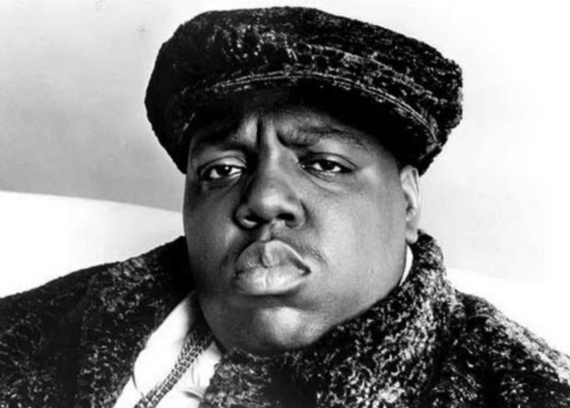 The Notorious B.I.G. photographed to promote his album Ready to Die.

Shaquille O'Neal and Biggie were close friends and even collaborated on a song together, called "Can't Stop The Reign". He was supposed to be at the Vibe party with Biggie the night he was killed. Shaq questions whether or not his presence would have changed the outcome of the night.

Many artists Biggie collaborated with wondered if he was wasting their studio time. In the studio, other artists would write down their rhymes and Biggie would sit in silence. Biggie was actually memorizing his rhymes and would surprise everyone when he said he was ready to record.

Ready To Die originally had two sex skits on the album. The retail version only contained one which was "Fuck Me" with Lil' Kim.

Although Biggie raps about wearing Moshino, DKNY, and Versace he didn't actually wear much of it since it didn't fit him.

While he was alive, Biggie constantly talked about retiring from rap and moving to the South, where he said things were quieter and slower, and where he could "move at his own pace."

Biggie had asthma--but this clearly didn't stop him from straight spittin'.

The baby on the album cover of Ready To Die is not Christopher Wallace.

Biggie pirated "Ready To Die" himself on tapes and gave them out to everyone in his neighbourhood for free in the summer of 1994.

As everyone exited his funeral, an instrumental version of "Miss U" played.

Legacy
Despite a hauntingly violent past, Christopher Wallace's greatest weapon was language. Rapping about sex, drugs, and his troubled past; Wallace takes you on a musical journey, tugging at your heart strings in order to compose a beautiful melody--that is still, in every sense of the word, hardcore. Rest easy, Big Poppa (1972--1997). 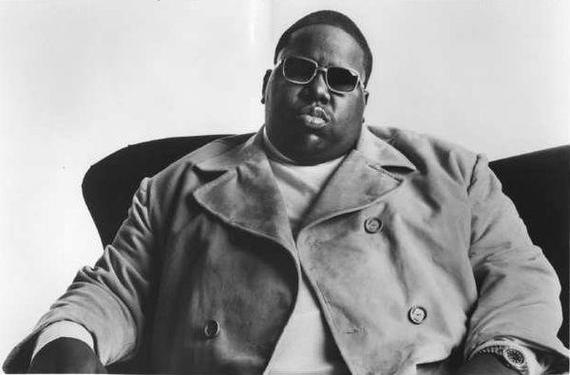 The Notorious B.I.G. photographed for The Source Magazine.