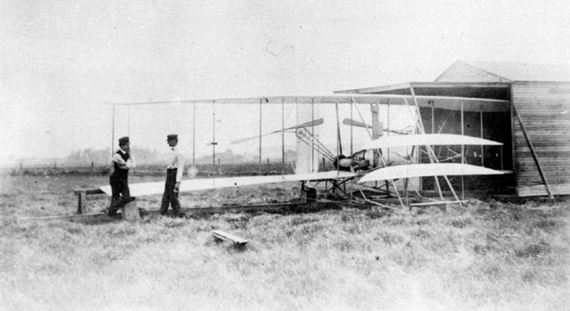 I have to say I was flattered when my good friends the Wright brothers invited me aboard their very first flight. I never really showed any interest in aviation, but I guess I was supportive enough of their endeavors to have them want me present for this ground-breaking trip. So I went. But I really wish I hadn't. The Wright brothers are freakin' crazy.

The first thing I noticed was that their plane was pretty shoddy. The Wright brothers are inventors, not designers. But still, you'd expect the plane would at least have some kind shield to it. You know how you walk past a construction site and you can see the wooden frame of the house? That's what the plane was. I mean, they could have at least tried to cover it or coast it with something. They said it was fine and that it kept the plane light, but come on, have some showmanship. No one in their right mind would ever pay to get on this death trap.

It was only short minutes before we took off that I learned that pretty much every attempt they made so far to fly had failed. Just last week they had a glider crash all over the beach. "That's different, gliders suck," they said. Wilbur started screaming "Come on! Get in," Sticking his tongue out and flailing his arms. Orville ran inside too, and chanted "Yolo"!

Another awful thing about this whole flight was the food. I know you shouldn't expect too much from airline food, but this was abysmal. Wilbur's girlfriend at the time made some soup, which was not a good choice for an open air flight. If you travel in a plane with no coasting, you're going to want solid foods. Orville brought some grapes, but the bastard wouldn't share. Luckily I had some Kellogg's toasted corn flakes. It's damn delicious. If anyone is going places it's those Kellogg's guys, I tell you.

Once we were airborne, I asked what was the destination. I was a fool to think these assholes had some sort of plan beyond getting off the ground. "Let's fly over the nude beach and see some tits," Wilbur insisted. No wonder these two were never married. I suggested we fly over the river, so we could at least have water to land in once this piece of junk breaks down. I was vetoed right away. We ended up flying in circles over the baseball stadium to watch the game because those cheapskates didn't want to pay the three dimes for tickets.

Eight seconds into the flight, Orville vomited. "Don't worry, it's just my motion sickness," he explained. Why the hell would someone with motion sickness dedicate his entire life to building the shakiest of vehicles is beyond me. He chanted Yolo again and kept on hurling. At least now I was glad this plane was open to the wind.

We landed in an open field outside North Carolina. To be honest, I was shocked we got out alive. The brothers celebrated their first successful flight, while I was busy making sure they didn't drink too much and pass out. I was all ready to head back home when they made it clear to me that we weren't flying back. "I'm tired of this whole plane business. Let's invent time machines"! Wilbur declared. They started tearing the plane to pieces and re-building it as something else. I left them there in the field and walked home. I never saw them again, so they could well have been successful with that time machine idea. For all I know, they somewhere in 1985 right now, ogling at space boobies.