Well, the same goes for that first night spent on the streets or in a homeless shelter. The first time you're homeless, the intense feelings of fear and uncertainty are impossible to forget.

I recently started working for a seasonal homeless shelter in Glendale, California. My job is to monitor a bus pick-up five nights a week. On New Year's Day, a girl in her early 30s showed up, and it was clear that it was her first night homeless. She looked so alone and scared. She told me she lost her job a few months back and was living with friends, bouncing from couch to couch, until all welcomes had run out. She called 2-1-1 (a phone number for social services) and the operator told her about the winter emergency shelter.

If you've never been homeless, it's tough to describe that first night sleeping on the street. The fear and disillusionment are almost paralyzing. You just go through the motions, but at the same time you're beating yourself up for being in this situation. It is very surreal because no one ever thinks they will become homeless. No one.

I'll never forget my first night. All of a sudden and without warning, I found myself homeless in Koreatown near downtown Los Angeles. I was sober, but I had no money, no place to go and no one I could call for help. I was officially homeless.

This was all new to me. I had no homeless training. I had no clue how I was going to survive. Just six months earlier I had a well-paying job in the television industry, overseeing syndicated programs like Wheel of Fortune. But now, I was the one who had suddenly landed on bankrupt. The irony was painful.

I decided to walk from Koreatown to North Hollywood, mainly because I knew the neighborhood and was comfortable with the area. I walked 11 or so miles to the valley. By the time I arrived, it was beginning to get dark, so I started to think about where I was going to sleep. I decided to try a park close to my old house where I used to play my conga drum on hot summer days. But when I arrived, I noticed gang members hanging around in the dark, so I moved on to another location. 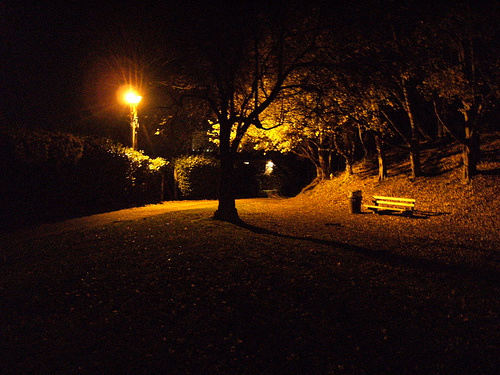 I continued walking to park after park. I just didn't feel safe in any of them. My feet were becoming swollen; I was emotionally and physically exhausted. I knew that the worst crimes in the city -- muggings, beatings, shootings -- happened at night to people living outdoors. I knew that when you sleep outside, you are vulnerable to just about everything. I was scared. Probably more scared then I have been or ever will be.

I think it was around 3 a.m. when I finally found a park near a small shopping mall in North Hollywood. It was empty, and the first place where I felt safe enough to lay down. Exhaustion quickly set in and I closed my eyes. I don't remember how much time had passed -- maybe 20 minutes -- when, suddenly, all the water sprinklers went off. I just laid there in disbelief, soaking. It's impossible to describe the mixture of fear, anger, vulnerability and, well, homelessness I felt as I lay there.

Today, it's easier for me to laugh at that bit of misfortune with the sprinklers. But the deep memories of pain and loneliness from that night will always be with me.

Those of us who work in homeless services can usually spot someone fresh to the streets. It's usually not their clothes or hygiene, but rather the look of fear and confusion on their face. The young girl who showed up at the winter shelter on New Year's Day was scared. Luckily, there was a new female volunteer working that night. When I left the shelter, I noticed both of them sitting on the homeless girl's cot, talking.

I wish I knew how her story ended, but as of last night the girl has not returned to the shelter.

Sadly, thousands of people experience their first homeless night each year. No matter what circumstances led to their homelessness -- eviction, foreclosure, unemployment, addiction, mental illness, domestic violence -- being homeless for that first night is painful. Now imagine a personal crisis has hit, and you no longer have access to money or a place to stay. It is now your first night homeless. What would you do?