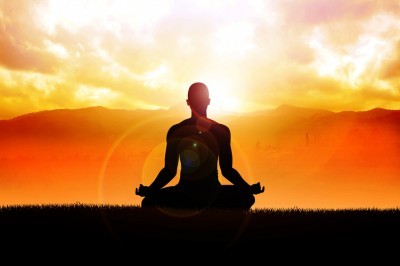 I had been practicing meditation for several years before I mustered the courage to sit a silent retreat. Lord Resistance, you are one strong adversary.

The idea of a 10-day silence intrigued me right from my earliest visits to a local Buddhist center, where week-by-week I was learning the rudiments of "insight" meditation. But fear persistently outpaced interest. Could I tolerate 10 days of silence without hating myself, without going crazy, without collapsing into debilitating sadness, anxiety, or boredom?

I did not yet trust my emotional reliability in the absence of familiar distractions and comforts. I knew I was capable of deep happiness -- a drop to my knees with tears in my eyes kind of happiness -- but also no stranger to inner torment. My mood seemed to be like a roulette wheel, with a marble that might land in "fine," "anxious," or "miserable" without any obvious cause or objective rationale.

But I survived, and survived intact. I did not go crazy. No buried childhood traumas resurfaced to cripple me (one of my fears). I suffered a few bouts of melancholy, and the occasional panicky avalanche of familiar distress. But these were more than compensated by a previously untested, and unforeseen, resilience. There were even patches of joy.

Meditating all day long on retreat is altogether different than an isolated sit shoe-horned into a busy day. Many factors help catapult one's practice forward: the presence of so many other meditators; the skill and commitment of the teachers; the dedicated setting (in this case, Spirit Rock Retreat Center, in northern California); the kind staff and healthy food; and of course, the day-in, day-out focus on meditation and learning the dharma.

My practice stretched well beyond all previous bounds. I got my first hints of confidence as a meditator.

Still, I discounted much of what was taught in the nightly dharma talks. I listened carefully, but mostly to critique what I heard. Each night, the merits and flaws of Buddhism were on trial in the courtroom of my mind. I was judge and jury, allowing this point, disqualifying that one.

I'm good at that -- listening, evaluating and dismissing. It's a style that has advantages, in that I'm not easily conned. I can smell snake oil a mile away. But it also means that I am prone to overlook hidden treasures. Sometimes what we mistake for snake oil is actually a healing potion; a surface whiff of "snake" can mask a sweet, even life-changing, fragrance underneath.

If Buddhism were meant to be accepted on blind faith, I wouldn't have gotten as far with it as I already had. The practice invites curiosity, doubt, and self-investigation. But "doubt" is a two-faced companion, a hindrance as well as an ally. What a burden this can be in the search for life's deeper resonances -- over and over to teeter on that shaky fulcrum between logic and faith, between hunger for hard evidence and the surrender demanded for deeper explorations of spirit.

It gets even trickier because doubt often masquerades as wisdom. It can sound thoroughly convincing, even authoritative, in the moment. It took me a long time to see that Doubt often moonlights as a henchman for my old adversary Resistance. Like a smug god or bratty child, Resistance snarls "don't tell me what to do," and clever Doubt provides the smooth rationale to justify the defiance.

Still, that first plunge into intensive silence was unlike anything I'd previously experienced. After years of practice, I started glimpsing the deeper possibilities of meditation and the dharma.

Then something startling happened. Early one morning near the end of the retreat, I awoke into a silence so complete I couldn't find my bearings. It was magnificent and eerie. I couldn't make out where it originated, inside or out. It seemed to come from beyond or outside me, but this made no sense. I couldn't locate anything familiar in its strangeness. Had the world ended, maybe? A nuclear bomb? Had I lost my hearing? Was I dead?

It took several moments to realize that the world was the same but I was not. For the first time, the nonstop barrage of mental chatter that I take as "normal" was completely absent. I had never realized this chatter could be gone -- it was such a constant backdrop, I had never even quite realized it was always there. All those voices, all all that banter, all that constant commentary -- gone. And in its place, a glorious... nothing.

Here was an unsought silence, soul-deep. Potent as an aphrodisiac. Sweet as nectar. A silence of thought and emotion as well as sound. Nothing registering except profound tranquility.

It lasted less than a minute, but that didn't matter. This was no book teaching, no dharma cleverness; this was my first evidence that life within the immutable confinement of my own skin, my own psyche, could be different -- sweeter and freer -- than it was. A new inner compass pointed towards a truer north of what might be possible.

I left Spirit Rock changed. I'd not only survived, but for a few brief moments a mystery more eloquent than words had enveloped me.

For the first time in my explorations of faith, the twin deities/bullies of Resistance and Doubt had been propitiated. Emboldened, I resolved to explore new realms beyond their restrictive gates -- at least before they could recoup their strength and revise their strategies.

(I spent the winter of 2012 on a self-guided, three-month retreat at the Forest Refuge, a Buddhist meditation center in rural Massachusetts. This twice-monthly blog explores how intensive retreats can inform everyday life).