The day I stopped breastfeeding was like any other day to the rest of the world. The sun outside my Miami window continued to shine bright and insanely hot. Reruns of Entourage came on at 9:00 a.m. on E!, just like it had for the last three months or so. My mother continued calling me every couple of hours just to "check in." No one experienced any sort of real change except for me. After spending what felt like six months what was in actuality only 10 weeks, taking herbs, drinking teas, going to see lactation consultants, attending support groups and pumping until, quite literally, there was nothing left to pump, I felt, what can only be described as the greatest relief I have ever felt.

I had always planned to breastfeed; it was the only expectation I had once my baby was born. I read up on everything I could regarding the subject. I proudly bought my breastfeeding cover a couple of weeks before my due date but I knew I wasn't going to use it. No, no, not me. For I wasn't just going to breastfeed my baby but I was going to be out and proud about it, no matter who felt uncomfortable with boob in public. I was going to be feeding my baby! In fact, and it's embarrassing to admit this now, but as I look back on my pregnant life, I can say that I was so set on this for my child that I had some pretty nasty judgments on women who bottle fed. In my mind, there was no other option. Why wouldn't you feed your baby something so pure? Wasn't it considered nutritional gold? Also, I mean, it's like free and stuff so that was good too. 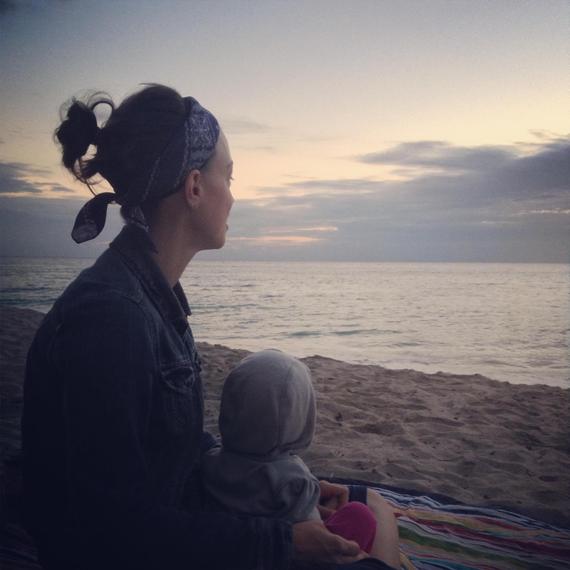 My daughter and me enjoying the sunrise this Fall.

And then my daughter's birth day arrived. She weighed 8 lbs. and was perfect. I spent the first hour of her life with her on my chest -- skin to skin. She easily latched on to my breast and I was in heaven. Yet, as the days passed, she was losing weight and crying all the time. She cried so much. The generic label of "colic" was thrown around by a few folks. It was suggested by a family member that she might be a "high-needs" baby, whatever that meant. The suggestions by people with and without medical degrees were endless. All the while our baby was being "diagnosed" as a myriad of things, I was sinking further and further into a postpartum depression that I couldn't get out of. Our baby was barely sleeping two-hour stretches. Every two to three hours, I spent roughly an hour and a half feeding her and then pumping and yet still, I was producing minimal breast milk. I had spent a fortune on every homeopathic and herbal remedy suggested and nothing was working. I was crying all the time and barely eating. Most importantly, I wasn't connecting with my child. In my malnourished, sleep-deprived postpartum haze, I didn't have enough energy to attempt to bond with my baby. Everything I had was put into getting my body to produce milk.

In my attempt for any kind of supportive connection, I reached out to the online community. I was reading every breastfeeding website and group chat I could find. "Don't be a weanie," one very popular site posted, "Breastfeed your toddler." As I reached out for support and a community who might understand my devastation at not being able to breastfeed like I had expected, I felt more and more alienated. "I don't want to be a 'weanie,'" I thought, "But what if I don't have a choice?" You see, I knew it was coming, the inevitable suggestion to try formula.

And then, it happened. After about two weeks of our daughter barely sleeping or gaining weight, our pediatrician made the suggestion of supplementing with formula. My heart sank as I sat there in disbelief. But, our kid needed to eat and so, later that day, while I sobbed next to him, my husband fed our baby girl her first bottle of formula. I couldn't believe we were feeding her formula. Wasn't formula the work of the devil?

Turns out, no, it's not the work of the devil. The night of her receiving her first bottle of formula, our daughter slept five hours straight. And guess who else slept five hours? Me. I continued my regime of breastfeeding and pumping as well as tea-drinking and herb-taking all the while supplementing with formula. By the time I made the decision to go strictly to formula, I was netting a total of only four ounces of breast milk a day. Though that first night I slept the five hours, my life went right back into a cycle that barely gave me time to take care of myself. My feeding and pumping ritual took about two hours with each feed. I did this roughly eight times a day so that meant I was spending 16 hours of my day trying to get my body to do something it just couldn't do.

I finally made the decision, in conjunction with my husband, to stop breastfeeding when our baby was 10-weeks-old. Though it was only 10 weeks, it felt like months and months. The days during those 10 weeks dragged on at a snail's pace while the nights were dark and endless. I looked at every day like an endless cycle of disappointment knowing that I was putting in all this work trying to get my body to work in a way that it just wasn't made to. When the decision was made to only use formula, my husband started taking over feedings and I started sleeping, which led to me eating healthy and taking care of myself. All of this meant I was getting to a place where I could finally start building a positive relationship with our daughter. She is now 16 months-old and incredibly healthy and happy. And me? I am now kicking myself for letting my preconceived notions of formula take over the first 10 weeks of my time with my newborn. Instead of becoming an advocate for breastfeeding, I became an advocate for just letting every mother do what they know is right for their baby. I hesitated the first couple times I mixed up some formula for her in public for fear of what other moms would think. But, I got over myself quickly. I will never get back those precious first weeks with my newborn. I spent those weeks in an unnecessary downward spiral of shame and guilt when I could have been connecting and loving my child and myself. It's a lesson I will take with me every day.