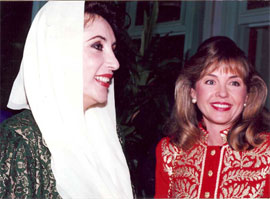 It was a blessing for me and a blessing for America to call Benazir Bhutto "Friend". She sacrificed her life for the future of her country and for the hope of a better world for us all. As her friends, we failed her. I could have prayed more for her safety and my country could have done more by influencing the powers that be in Pakistan to protect her. The FBI needs to get involved immediately to find the perpetrators of her assassination and the earlier attempt on her life that killed more than 100 people. Certainly the United States can assert diplomatic and economic power to enable the FBI to be invited to work with the Pakistan government in solving these crimes and bringing justice to the people of Pakistan. Who we elect as President and Vice President of the United States in 2008 is now more critical than ever. They must have "hands-on" military or prosecuting experience to be the right Commander in Chief to lead the world against the forces of evil.

Benazir was a privileged, young, beautiful and intelligent woman, so why didn't she just sit back and enjoy the luxuries of life? Why did she risk her life for her country and for our future? Because, Benazir was truly a courageous leader, a compassionate human being and a committed instrument for peace, hope and reconciliation. When the going got the toughest for her country, she "stood up to be counted", and she could be counted on to deliver. The cowardly terrorists feared her, that is why they killed her. She was a woman of tremendous faith who surrendered herself totally to God's will. She did not welcome martyrdom nor did she fear death because she was a righteous woman committed to her people.

For nearly two decades we enjoyed a special relationship and shared personal life experiences that are treasured memories. Her passing is a call to action to capture the criminals and restore democracy in Pakistan for world security and peace. Our nation's financial support should be to educate the children of Pakistan to embrace and respect people of all cultures and all faiths. On several occasions we spoke about religion. She was a devout Muslim who believed in living her faith by example. She wanted the world to know that Islam is a religion of love and compassion, not of hatred and violence as many have come to believe because of extremist terrorists. In her view Muslims who commit acts of terror and indiscriminate violence are not true followers of Islam.

My most recent communication with Benazir was last month in early November when I invited her to join me in Beijing, knowing we both share a love for China. She told me she was leaving her family in Dubai to return to her beloved Pakistan because of emergency measures being implemented there. Even as she left her own children behind she was selflessly concerned about mine, sending them her love and letting me know that we needed to catch up, as soon as life allowed us to do so. As she risked her life for the security and freedom of others, I let her know that we were concerned for her and we were praying for her safety. I also told her that I asked Mother Teresa's Missionaries of Charity from around the world to pray for her and they let me know that they loved and admired her for being a defender of life. Her pro-life speech in Cairo made them believe she was an instrument of God for peace.

In 1988 I met Mother Teresa for the first time in India, and we began working together. She inspired me to establish The Noel Foundation, which was the catalyst for my relationship with Benazir Bhutto.

Like Mother Teresa, Benazir was committed to ensuring that all children were protected, irrespective of their faith or ethnicity. She was passionate about Pakistani girls having a chance in life to be educated and to fulfill their potential.

I first met Prime Minister Bhutto at her home in Islamabad in 1989, at her invitation. This remarkable woman who was recently elected as the first Prime Minister of an Islamic Nation had also recently become a mother for the first time to her son Bilawal. After reading her autobiography Daughter of Destiny, which she wrote following the execution of her father, I wrote to her to say that we both shared a deep love for our fathers who raised us to believe we could aspire to any role in life with hard work and dedication. In this letter, I also let her know that The Noel Foundation would like to honor her and support projects that would provide educational and economic opportunities for disadvantaged women and their families.

My friend Jean Ariyoshi, the First Lady of Hawaii, accompanied me on this memorable trip to meet Prime Minister Bhutto in Pakistan. How beautiful she was when she walked into the room on that warm day in Islamabad. We immediately learned that she was not only blessed with beauty and brains but with a heart and passionate spirit that you rarely meet or experience. She welcomed us with pure dignity and warm hospitality, even pouring the tea for her guests. Although the surroundings were imposing, her humble style and kind words made us feel at home. After formal introductions the first thing she wanted to know was how to lose weight after having a baby.

She then went on to speak so eloquently about the situation of her country, her admiration for Margaret Thatcher, Prime Minister of Great Britain, her commitment to democracy in Pakistan and her passion for helping all people in Pakistan to have a better life. She told us that she was privileged to be from an affluent family and she knew that gave her the responsibility, and at the same time, the opportunity to help Pakistanis less fortunate then she was. Helping the women and girls in her country, she told us, was a priority for her in her role as Prime Minister. She then arranged for us to meet with many women's organizations in Rawalpindi, which were impressive, as they allowed us the chance to meet many women of diverse social status all committed to their new leader and role model. I find it somewhat ironic that she should be gunned down in the very community that we saw as a bastion of hope in her country. At the conclusion of our trip to Pakistan we were informed by the British Embassy that Lady Margaret Thatcher wanted to meet with us to discuss the work of The Noel Foundation and her participation as an honoree. When we met with Margaret Thatcher at 10 Downing Street she conveyed her admiration for Benazir Bhutto and their shared passion for debate, politics and leadership.

On October 1st 1990, at the United Nations, The Noel Foundation in cooperation with UNIFEM presented the first Noel Foundation "Life" awards at a "Celebration of International Leadership". The honorees were Benazir Bhutto, Prime Minister of Pakistan, Margaret Thatcher, Prime Minister of Great Britain, Corazon Aquino, President of the Philippines and Gro Harlem Brundtland, Prime Minister of Norway. Unfortunately, Prime Minister Bhutto was prevented from attending as she was recently imprisoned due to a coup in her country. Barbara Walters, our mistress of ceremonies, introduced Benazir's mother, Nusrat Bhutto, who accepted the award presented by then Secretary General Perez de Cuellar. We later personally presented Prime Minister Bhutto with her "Life" award at events we held in her honor in New York and in California.

On many occasions when she traveled to the United States we would spend time together; she loved to talk about family, politics and religion. On one such occasion, she came to Los Angeles with her husband Asif, and we held a dinner party for her at Jimmy's in Beverly Hills. I asked her who she would like for me to invite and she said she wanted to meet Marcia Clark, as she admired her prosecution skills during the OJ Simpson trial. On the other hand, her husband wanted to meet Robert Shapiro, as he found him interesting to observe as a defense attorney. That evening JFK's press secretary Pierre Salinger joined us and played the piano, told jokes and welcomed our friends from Pakistan to an unusual evening. Benazir commented "only in America could you have two opponents dining together, a prosecutor and a defense attorney."

On another social occasion we celebrated at the Los Angeles home of my aunt, Georgia Frontiere, owner of the St. Louis Rams. The focus of the evening was Benazir's continued commitment to her country and to helping those in need. We also talked about American football. Benazir found it interesting to meet the female owner of a football team.

On several of her visits to California Benazir would join me at our Stonepine Retreat in Carmel Valley. One of the most memorable events was The Noel Foundation's First Global Issues Forum addressing "Peace in the Middle East". Benazir brilliantly debated Ambassador Ken Adelman until everyone reconciled their differences. We also traveled together to Washington DC to meet with political and business leaders and members of the academia community where she often spoke about foreign policy. These meetings were facilitated by our mutual friend, Mark Siegel, who she greatly relied upon and introduced me to in 1990. There are so many personal stories and beautiful memories that must be left for another day. I miss my friend.

Benazir was loved by all who worked with her and by millions of people in Pakistan. Her vision will become a reality when the people of Pakistan take control of their destiny and become a peaceful democratic country dedicated to eradicating the forces of evil from their lands and be a force for good in the world.