Lady, I Love You 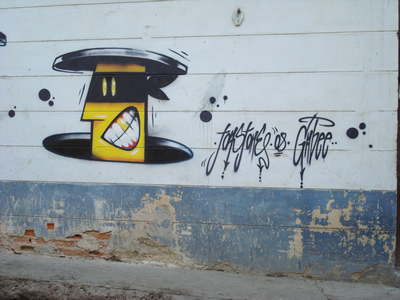 I am waiting on a bench in Parque Central for some friends who are already half an hour late. It's been a hard day and I have little desire to speak with anyone. A boy, he can't be more than 20, sits down next to me. He speaks English badly but uses it to ask me where I'm from and if I understand Spanish. My first impulse is to tell him to beat it, I'm not looking for jineteros* hunting for tourists, but I let him advance his failed strategy of seduction.

I don't know if it's my pale skin that I inherited from two Spanish grandparents, but my passport is just as blue and Cuban as the one he has. If not for his false impression that I'm a foreigner, he'd never come close to me. I'm not a good match -- obviously he can see that -- but he calculates that even if I look like a poor stranger, at least I could get him a visa to emigrate. Encouraged by my silence, he says in English, "Lady I love you," and after such a declaration of love I can't contain my laughter. I tell him in my worst Central Havana slang, "Don't waste your bullets on me, I'm cubiche*." He jumps up like he's been stung by red ants and starts insulting me. I can hear him shouting, "This skinny thing looks like a foreigner but she's from here and worth less than the national money." My day has suddenly changed and I begin to laugh, alone on the bench, a few meters from the marble Jose Marti statue that adorns the park.

The rematch comes quickly for the frustrated Casanova. A Nordic woman in shorts walks by and he repeats to her the same refrain he let loose on me. She smiles and seems dazzled by his youth and his braids ending in colored beads. I watch them leave together, while the lively youth declares his love in a language in which he barely knows a dozen words.

Translator's notes
The original title of this post is in English.
*Jinetero/jinetera: prostitute or hustler.
**Cubiche: Derogatory slang for a Cuban.

Yoani's blog can be read in English Translation here.

Casanova Communism Tourism Prostitution Jose Marti
This Blogger's Books and Other Items from...