But tucked at the end of her obituary in the Boston Globe was also a more unusual request that Weiderhorn's grandson inserted. Instead of sending flowers or giving to charity, Jethro Heiko asked those who knew Weiderhorn to a donate to a Kickstarter project for a card game he is developing.

The obituary, full of the standard details of birth, marriages and children, included a link to a page dedicated to Weiderhorn on the website of his Philadelphia-based design firm, The Action Mill:

"My Gift of Grace is a game that helps families and friends talk about death and dying ... This is a project that can help us prepare ourselves for life's endings and to live our lives with greater grace and resilience, two qualities which Rhoda embodied throughout her life," it said. "Note: for this project to be successful, we need to achieve our fundraising goal by August 9th, so please pledge today and ask your friends to pledge as well."

It's working. Along with his three partners at the firm, Heiko, a designer and community organizer who previously ran a bereavement support program for college students, has raised more than $27,000 for the game. The group has printed a prototype, and wants to ship and sell it by the fall to customers including hospitals and hospices, funeral directors and social workers. The total fundraising goal for revisions, testing and manufacturing: $38,000. 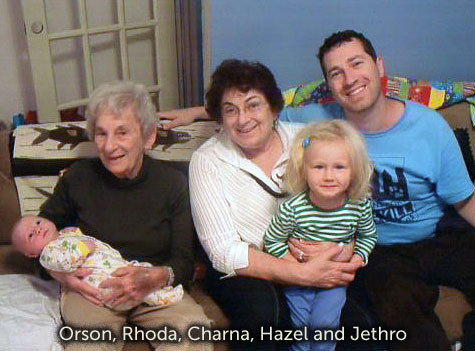 "People are contacting me, sharing stories about their experiences with death, saying things like, 'I would not share this with you, but your project gave me permission to do so,'" says Heiko, 40, who launched the fundraising campaign with his colleagues in early July. Weiderhorn's death has brought the work even closer to his heart.

The game doesn't have winners or losers. Instead, it uses cards divided into questions, statements and activities. To start the game, each player fills out a card that has a question (What activities make you feel alive?) or statement (Check off from a given range of options about what you think will be the worst part of the end of your life.), then uses those to start conversations with family and friends. The game ends with "action" cards, which double as magnets, and act as reminders to, for example, visit a cemetery and talk to its employees to learn more about death and funerals.

The goal is to to help people express and explore what they want for their lives and deaths -- hopefully, long before they die.

"You might give the game to your family when you turn 50, or your parent might give it to you at your graduation," said Action Mill partner Nick Jehlen. "Playing the game with your loved one is a gift as well. We like to call it an 'important conversation wrapped in a game and given as a gift'."

My Gift of Grace is just one of the death-centered projects of Action Mill, a 7-year-old "human-centered" design firm specializing, according to its website in creating, "tools to improve how people work, transform complex systems, and create more meaningful connections." The firm works with doctors and hospitals, as well as nonprofits and activists on projects that combine the company's expertise in social change and nonviolent protest as well as industrial and graphic design. 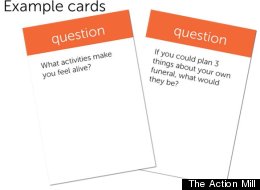 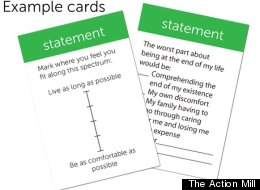 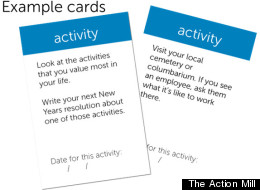 "A lot of people think a game about death and dying sounds sad and scary, but our experience is the more you do it, the more it allows you to be joyful about day-to-day life," said Jehlen, 42, who tested the game by playing it with colleagues, and sought the input of chaplains and health-care workers.

"It's a very unusual sort of detour from the standard practice or standard way of things," said Karl Ahlswede, a former cardiac surgeon who has consulted on the game. "What I see, particularly with some people in the aging population, is that if you approach a conversation about the end of life it brings up a wall. So if instead what you are doing is playing a game and talking about things or activities that are important in their lives and coming at it from the direction of letting family know about their desires, it bridges a gap. Some people need a nudge."

And while the game's name may indicate a religious tilt, its creators say My Gift of Grace is also for nonreligious people.

"We talk a lot about grace in our company. We have some people who say this is about religion. Our answer is that grace means different things to different people. It's having ease and comfortability," said Jehlen. "Grace is associated with Christianity in some people's minds, but grace is also a part of a lot of other religions. We don't put explicitly religious questions into the cards, but people who are religious can express their faith while they play."

This isn't the first time the company has tried to tackle the taboo topic of death. Earlier this year, Action Mill launched Death and Design, a blog that looks at creative ways people around the world approach death rituals and processes. The blog has explored changes at the 115-year-old San Francisco Columbarium, a "kind of cemetery for the ashes of people who have chosen to be cremated." And it's peered into the Salle des Departs, a French minimalist morgue that commissioned artists and a composer to make a typically cold, uncomfortable setting for grieving families more uplifting.

The blog has also highlighted at Death Cafes, informal coffee-shop meetings set up for anything-goes conversations about death, and tech companies that work on death-related issues. GetYourShitTogether.org, for example, was launched by a widow who was at loss about her late husband's wishes about life support, or how to handle life insurance and funeral issues after his death from a car accident.

"In society, we think of death as a constraint but in the design world, constraints are considered a gift because you can work within them," said Georgia Guthrie, another partner in the firm who graduated in 2011 from the University of the Arts in Philadelphia with a degree in industrial design. "Our usual work is in using design to help people solve problems, so we have been thinking that along the lines of death. How can we talk about, and design around, death to make life better?"