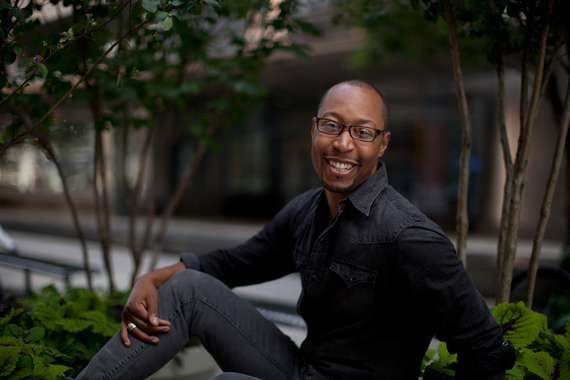 Before Global Kids I was an introvert. It's hard to believe that now, but I would go from school straight home, do my homework, and spend time with my family and the people who lived on my street in Crown Heights. There were a few doctors, a few lawyers, a few Ph.D.s but, of course, they were all older.

My freshman year of high school in downtown New York City, my English teacher asked to meet with my parents. She thought that I could go far in life because I was smart, but I wasn't social. She told them I shouldn't only care about books and studying. That didn't really change until the end of the school year when a girl in my chemistry class told me about Global Kids. Our school didn't have a Global Kids on campus, so the meeting she went to was a citywide meeting on Fridays at NYU. That first Friday I walked in and I fell in love, not just with Carole [Artigiani, Founder and President Emerita of Global Kids] and her personality, but also the staff. I really felt they cared about what I had to say.

It was not difficult for me to talk to adults but I didn't feel like I had a voice among my peers. At Global Kids I formed circles with people my own age and I heard their stories of being ignored by adults, of not having a voice in school, their neighborhoods, their communities. All of that was foreign to me. I thought when I saw youth not speaking up it was because they didn't care. I learned that there were people who deeply cared about issues but didn't have an avenue to express themselves. Global Kids exposed me to people who were not only from different ethnic and racial backgrounds, but different economic, social and cultural backgrounds, and that was important to me. No one teaches you how to speak to someone your own age who is angry, who is hurt, who feels ignored, who sees a friend shot, and then has to get up and go to school. Global Kids taught me that.

I went to Middlebury for college. I made international human rights a part of my thesis, and it really was due to Global Kids whispering in my ear not to abandon global issues.

After Middlebury, I attended Boston College Law School. I had always known I wanted to be lawyer but I'm certain that some of the international human rights issues that we took up in Global Kids made me interested in international law. Becoming aware of Tibet, for example, and the atrocities there, or, in 1997, while everyone was talking about Bill Clinton's affair with Monica Lewinsky, we at Global Kids were talking about the oppression of women in Afghanistan.

That's probably why, during law school, I took advantage of an opportunity to take part in the international prosecution of Slobodan Milošević at The Hague.

When I got the offer to go, I didn't have the funds. I needed money for a plane ticket, to rent an apartment, for food. I got a salary but it didn't kick in right away. I wrote to Global Kids and people there sent checks, money orders. People on the board gave money. Before I knew it, I had more than enough to cover my costs. My Global Kids family stepped in.

I participated in other kinds of outreach in law school. I'm fluent in Spanish, so I worked with Spanish-speaking immigrants in Rhode Island and Boston. I worked for free with indigent people, particularly immigrants. I'd help them avoid deportation or get asylum or refugee status. I gave free legal support to indigent criminal defendants in Dorchester Community Court, a really poor community in Boston, predominantly black and Latino and Cape Verdean. I watched the system treat them like they were not people, just a docket number to be cleared from a judge's calendar.

In 2003, I was appointed an assistant district attorney for Manhattan. It was important to me that I not just prosecute people and send them away. I always tried to think how things felt from the defendant's point of view. I never abandoned my notion of civil rights and civil liberties.

After six years of seeing so many people of color, indigent people and more and more women of color funneled into the criminal justice system, I decided I wanted to understand and examine the intersection between race and law, particularly the negative consequences of stop and frisk. So I decided to go to grad school.

By June 2015 I hope to graduate with my doctorate degree in African-American studies from Northwestern. I'm working on the history of racial profiling as it relates to law enforcement in New York. Particularly, I'm looking at the origins and the social impact of New York's stop and frisk law.