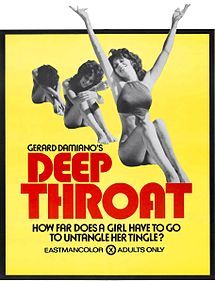 "Kristin, did I ever tell you that I saw Deep Throat?" Grandma Maria said to me.

It was a few days before Christmas of 1985. I was fifteen years old. Grandma Maria and I were sitting alone at the kitchen table eating pizzelles and honey cookies, and our conversations had turned, once again, to our family's Deep Throat past. I was still a young woman but I'd already learned that every time I was alone with Grandma Maria, I would learn something new and strange about my family. But this latest revelation, I never expected.

Grandma Maria laughed. "So you didn't think your old grandma would see a movie like that?"

"I'm just surprised, I guess. Why would you see it?"

"Your dad got me the tickets," Grandma Maria said, and she dunked a honey cookie into her coffee.

"I didn't ask him for the tickets. Just one night your father calls me up and says, "My film is playing at the President Theater on Twenty-Third Street and Snyder Avenue. I'll get you free tickets.' It was just up the street and it was free, so I thought why not."

I understood how, with her Depression-era frugality, Grandma Maria could never turn down anything free. And at the time, it must have seemed that everyone except her had seen Deep Throat; it was a major cultural event of that decade. So I shouldn't have been surprised. But still, the thought of her watching a porn flick was just unfathomable. Maybe it's because no child ever wants to believe that her grandmother, or parents for that matter, has any sexual curiosities. I also wondered why my father had offered the tickets in the first place. It must have been to preemptively indulge her unstoppable need to know everything.

Grandma Maria described arriving at the theater that night, she was relieved to see her friend Ida already waiting for her under an awning next to the ticket booth. Ida waved and adjusted the rain cap covering her short dark hair. Standing up to make her short stature appear taller, she looked the same as when she was schoolgirl. Her black pencil skirt and blouse were perfectly pressed and she wore a silk scarf around her neck.

"It's about time you got here," said Ida, looking around nervously.

"I'm so glad to see you, honey," said Grandma Maria. She gave Ida a big hug.

A moment later they were standing at the ticket booth. "My son-in-law left tickets for me to see a movie featured here tonight. My name is Maria Parrotto."

The man in the booth smiled wryly as he handed her the tickets. He then stroked one index finger over the other in the "shame-on-you" hand gesture.

"Enjoy the show, ladies," he said.

Ida looked at the man strangely and hesitated before stepping into the lobby. But Grandma Maria quickly hooked her arm around Ida's and dragged her through the door. The lobby looked like an ordinary movie theater with Hollywood movie posters of upcoming films, deep red carpets, and the smell of fresh popcorn. Once inside, Ida looked like a teacher studying the space in academic curiosity, while Grandma Maria played the grinning, mischievous student, up for anything.

"Are you sure this is a good idea?" Ida whispered.

"Of course it is! Let's hurry, the movie's already started."

They entered the dark theater. All around them, men sat alone in various seats. There were also a few giggling couples. Then Grandma Maria and Ida looked up at the screen and saw a huge penis.

"Oh my... Mary... I don't think we should stay," Ida gasped, and she stood there motionless, too paralyzed to move.

"Yes, we should stay," Grandma Maria hissed. "We walked twenty-five blocks to get here, and we're going to see this film."

"Okay," Ida said as Grandma Maria hustled them into a pair of seats. Ida glanced again at the screen, sort of covering her eyes with her hand. "Mary... let's sit near the back."

She also felt sad that our society had come to such a place that a movie like this was acceptable, even praised.

When the movie ended, they were greeted outside by pouring rain. Both of them let out a big sigh of relief. Then they just looked at each other and exploded into laughter.

"Well, Mary, thanks for an experience of a lifetime," Ida said, still laughing as they said goodbye.

As Grandma Maria crossed Twenty-third Street, she saw a young man she knew from work. John was a single twenty-five-year-old and he was hanging out with some buddies on the stoop of a brownstone. John recognized Grandma Maria immediately and his eyes widened.

"I certainly did, honey!" Grandma Maria called back, and she proudly gave him a wink. "See you tomorrow at work."

The next morning at work, John stopped by Grandma Maria's desk. "How's it going, Maria?" John asked nervously. Then he leaned in and whispered, "Hey, can I ask you something?"

"Is it true that the clitoris is in the back of a woman's throat?"

Maria covered her mouth and chuckled. But given this young man's bravery for even asking the question, she tried to be kind.

"I'm positive. I think you should go to the library and get some books about sex. I think it would help."

"Yeah, maybe I should do that," John said with a confused look on his face.

Men are so dumb, Grandma Maria thought as she shook her head in disbelief.

Check out the book trailer for The Pornographer's Daughter featuring David Koechner.