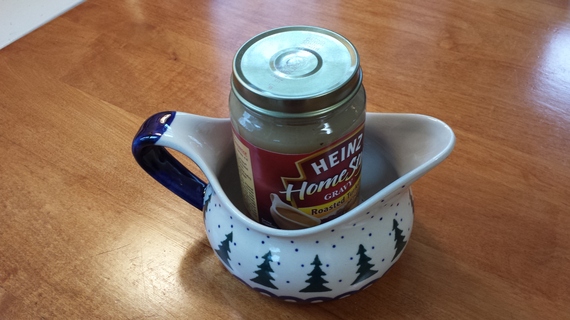 We do it every year. We cut out recipes. We make lists. We go to the commissary. We elbow each other out of the way to grab turkeys, cranberries, yams, and mini-marshmallows. We jam enough food into our pantries to feed an army... or navy, as it were.

Why? Because it's Thanksgiving, of course!

When our guests politely ask, "What can we bring?" we are faced with an interesting dilemma.

On one hand, our brains are about to explode over all the details of hosting, so contributions would be nice. But on the other hand, we have envisioned holiday meals using our own family traditions, and what if our guests bring dishes that are weird and unfamiliar?

I experienced this phenomenon twenty years ago, when we lived in base housing at Fort Ord, just outside of Monterey, California. Unable to fly back east to spend the holiday with our relatives, we accepted an invitation to have Thanksgiving dinner at another family's house down the street.

I fancied myself a pretty darned good cook back in those days (before kids turned my brain to mush and our staple food into mac-n-cheese, mind you) and was looking forward to contributing to the meal.

"What? But, you've got to let me bring something," I pleaded.

"Well, alright then, how 'bout you bring the frozen corn."

Frozen corn? Are you kidding me? She wasn't.

Over the next few days, I hounded the other spouse, offering my delectable Sausage Apple Pecan Cornbread Dressing, my rich Guiness Gravy, my addictive Swiss Onion Bread, my snappy Waldorf Salad. She resisted, but finally agreed to let me bring a lousy pumpkin pie and a tub of Cool Whip.

I swallowed my disappointment that Thanksgiving -- along with her boring stuffing and starchy gravy - and resolved to make what I wanted from then on.

However, year after year, the same dilemma kept cropping up. Whether host or guest, military spouses really don't like to give up their holiday traditions. But at the same time, we are often in unfamiliar places where we feel the urge to reach out to other military families for companionship during the holidays.

I realized that, unless we want to spend Thanksgiving stubbornly alone with our coveted recipes, we'd better learn to compromise.

If I am a guest at someone else's house, I won't turn my nose up at the hostess' fancy homemade cranberry sauce because I secretly love the canned stuff. I won't judge my host if he doesn't brine the bird, and then make passive aggressive comments like, "Could you pass the canned gravy? I think a little breast meat is stuck in my throat." I won't be bitter that I wasn't able to show off my Pecan Cheesecake with the Gingersnap Crust. Instead, I'll shut my pumpkin pie hole and gladly eat whatever my host serves.

If I host, I'll let my guests bring their Tex Mex corn soufflé even if it clashes with my Ambrosia. I can give up my beloved Swiss Onion Bread just this once, and let them bring their Gammie's Poppy Seed Loaf if it makes them feel at home. Who really cares if my friend has a different take on sweet potatoes - surely, no one has ever died from not eating marshmallows.

I'll survive, and probably gain ten pounds in the process.

Besides, this is the time of year that we're supposed to think about all the things we're thankful for, and isn't that being able to celebrate the holidays with our family and friends? Not the Green Bean Casserole with the French-fried onions, for Pete's sake.

Think of it this way: good friends and family are the meat and potatoes of life. The food? Well, no matter whether it's canned, powdered, or slow cooked from the drippings, it's just the gravy.

Lisa's "Better Than Yours" Gravy
1. Simmer giblets and turkey neck in a covered two-quart pot of water with quartered onion, chunks of carrot and celery, salt and pepper, while you cook your turkey.
2. Strain. You should have 3 cups of stock; add chicken broth if necessary.
3. Shake one cup of the stock with 3 Tbsp. flour in a jar with a lid.
4. When the turkey is done, remove to a platter and pour the drippings into a fat separator.
5. Deglaze the roasting pan by putting it over low heat on the stovetop, adding 1.5 cups water (can also use wine, broth or Guiness).
6. Stir to dissolve the intensely flavorful brown bits left on the bottom.
7. Pour the flour-stock mixture into the pan and stir while simmering 3 minutes.
8. Add the rest of the stock, and the pan drippings (not the fat), and cook over medium high heat for 15 minutes stirring constantly, until thickened.