Just in time for Valentine's Day, a magical romantic experience for all lovers (of cards), thanks to the power of mathematics.

Take out a deck of cards and extract the thirteen Hearts, setting the rest aside. Deal the Hearts into a heart-shaped display, something like as shown. There is no significance to the order here. 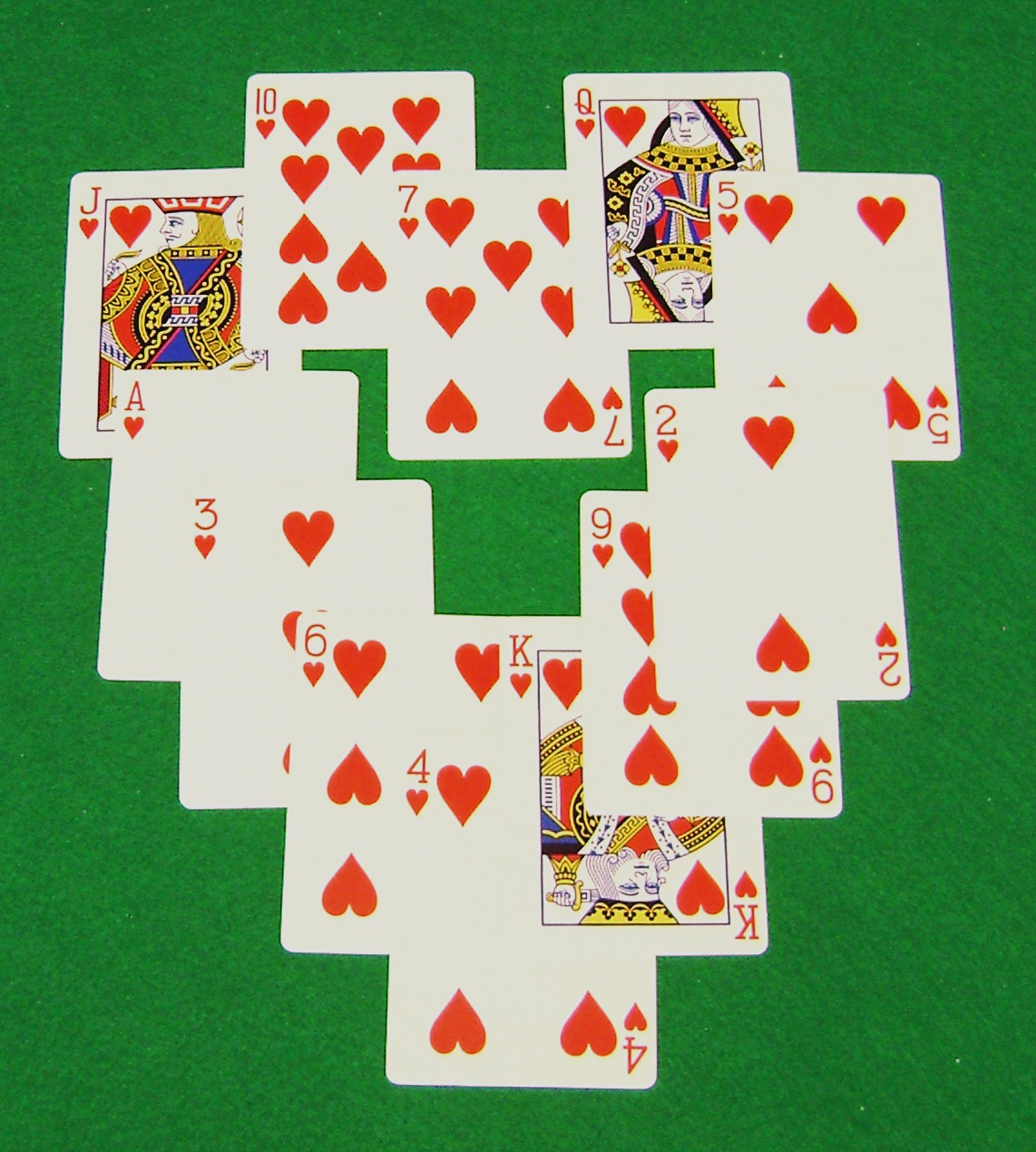 Say, "In my heart of Hearts, I want you to find the one card that for you best symbolizes our special relationship, while I turn away. It's a completely free choice. Hold on to it, making sure I don't see it. Then gather up the others into a tidy pile, and give those to me face down."

Turn away as indicated, and wait while one card is selected and retained. When the twelve remaining cards are handed to you, turn back, hold them out of sight, under the table or behind your back. Say, "My fingers are very sensitive, and so perfectly attuned to our love, that I think I'll be able to feel which Heart is absent."

Without missing a beat, bring them back into view, still face down, adding, "Actually, I just turned these into a dozen red roses." Have the selected card put face down in the middle of the cards in your hands, and set the restored packet on the table.

Next, produce a sheet of paper on which are written the words, Empathy, Sense of Fun, Good Looking, Affection, Confidence, Patience, Good Cook, Honesty, Sense of Humor, Integrity, Sensitivity.

Say, "Here are a dozen characteristics that soul mates commonly admire in each other. For instance, one of the things I love about you is your sense of fun." Pick up the packet of thirteen hearts, and start counting to a pile on the table, as you spell out SENSE OF FUN, one card for each letter. 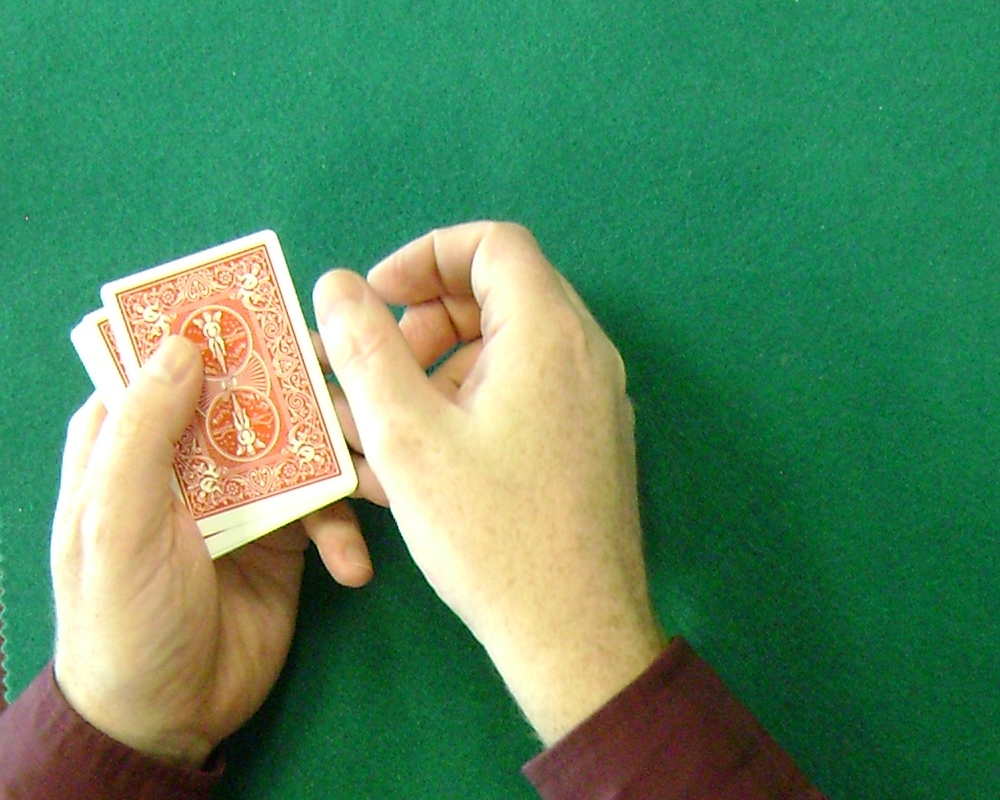 Naturally, this reverses the order of those ten cards. 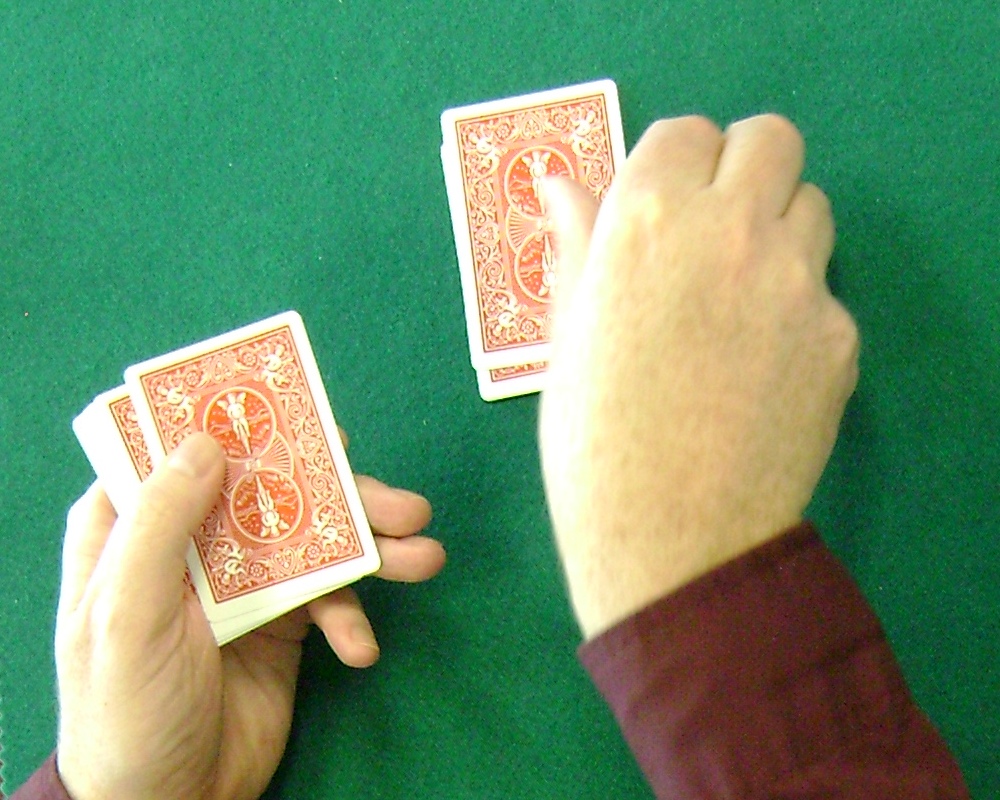 Drop the remaining three on top, as a unit. 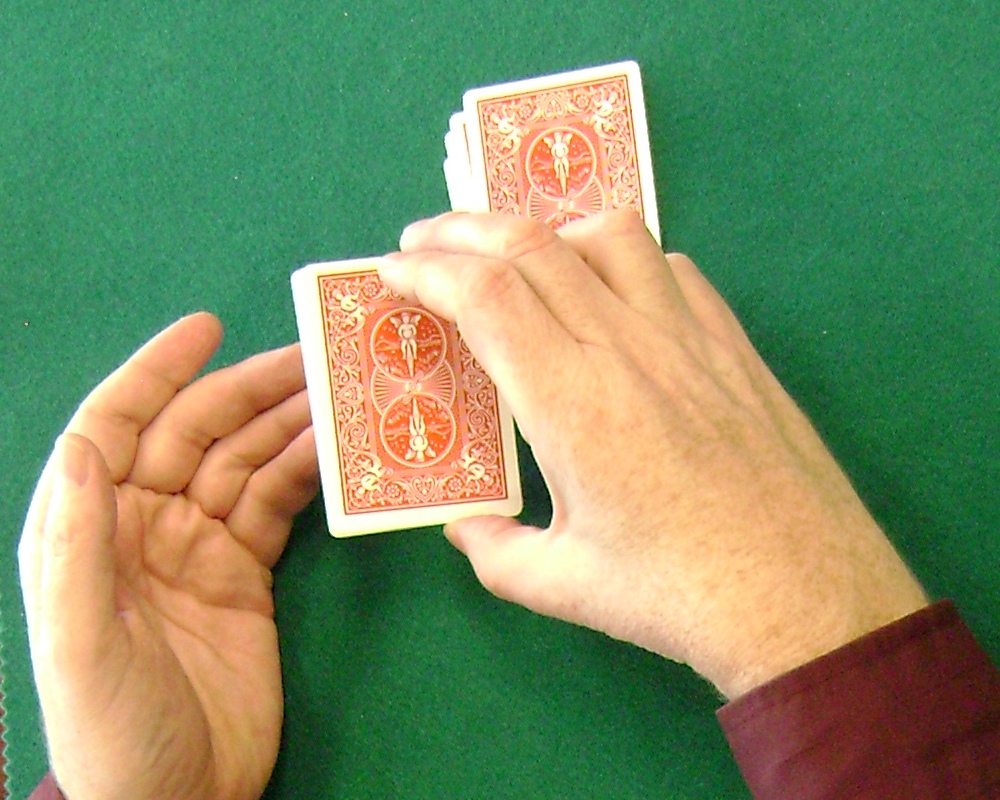 Add, "I also love your passion," picking up the pile again. Do the same kind of dealing out, just seven cards this time, as you spell PASSION aloud, dropping the remaining six cards on top as a unit.

Now hand the packet to your loved one, and ask that person to pick one or two items on the list, and do the spell and drop routine for each one. When you are sure that the spelling and dropping routine has been mastered, turn away and request that this be repeated for several other words or phrases on the list, as often as is desired. It's okay to repeat an item if the person feels strongly about that characteristic, and it's also permissible to have the spelling/counting done silently, if your lover is shy.

Turn back once more, and ask for the packet, saying, "It's hard to say where anything is now, as the cards have been thoroughly mixed by all of that unpredictable spelling, but always in tune with our special love." Now flip over the piece of paper, on the other side it reads:

Do exactly as it says: Deal the packet left to right into two face-down piles, one of size seven, the other of size six. Push the smaller one across the table towards your soulmate. Deal left to right again, to form piles of size four and three. Push the larger one across the table. One last deal yields a pile of two cards and a single card, push the two cards away. Pick up the one remaining card and hold it next to your heart.

Pause, "If this has worked out right, and in my heart of Hearts I believe it has, that should be a dozen roses for you. What was your selected card?" No matter what Heart is named, when you turn over the cards on the table, the selected card is not there. 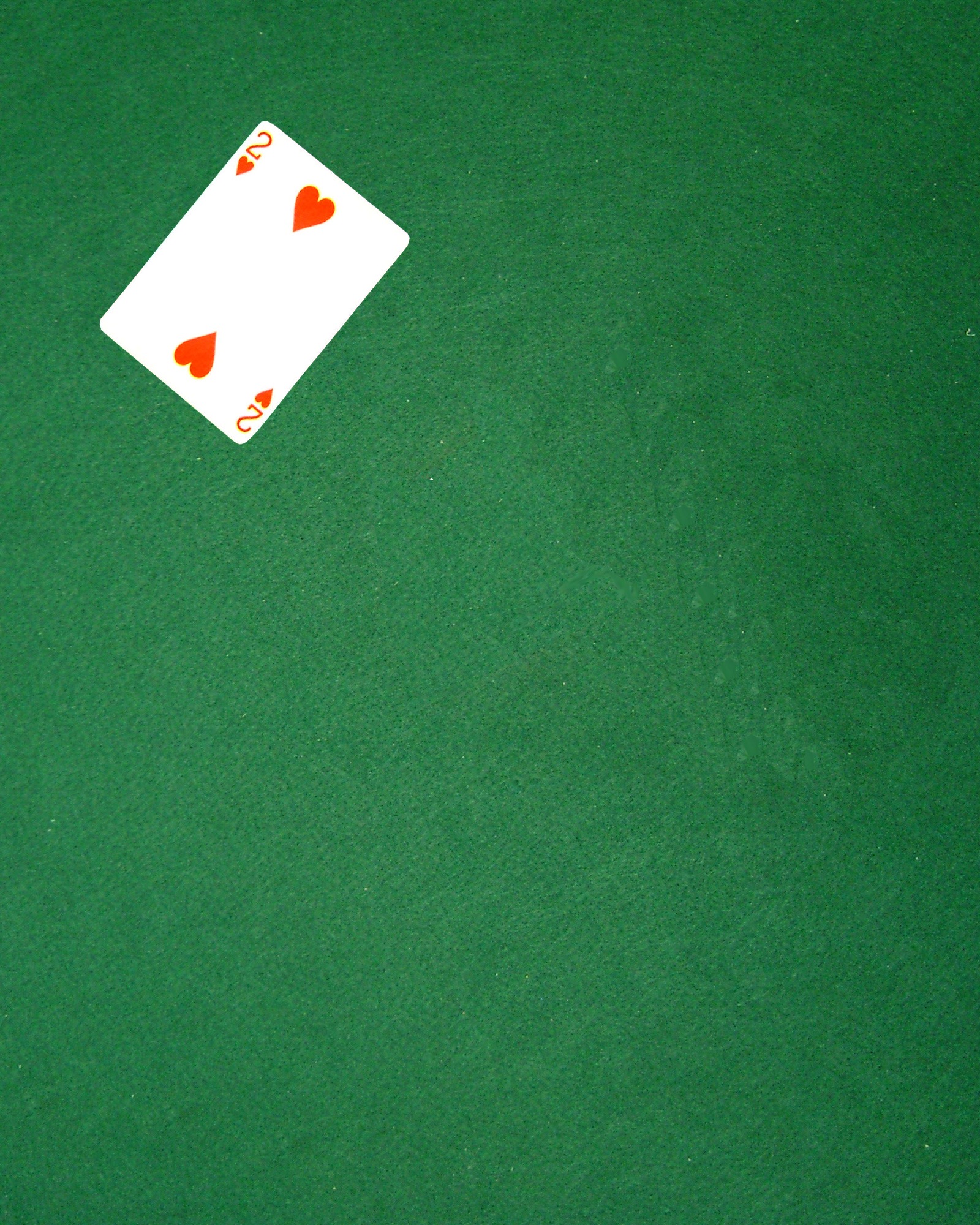 "A dozen roses for you, my love, I get to keep the soul card left. It was pre-ordained." Finally place the card you have clutched to your chest face down on the able, it is of course the chosen Heart.

Should it be the one depicted, you can add a "Two Hearts Beat As One" reference. Either way, it's a good time to produce the promised dozen red roses. You didn't forget to bring them, did you?

This is in essence a self-working card trick. We weren't kidding when we said, Have the selected card put face down in the middle of the cards in your hands. It must indeed go right in the middle, so that it's seventh of thirteen at the outset. When you place the twelve cards you're given out of sight, and pretend that you're feeling the card faces with your sensitive fingers, what you'll really doing is separating it into two packets of size six. Bring them forward as a single packet, discretely maintaining the desired break with one finger, so that it's easy to direct your lover to put the selected card in the exact middle, without making that precise placement obvious. Once that's taken care of, the hard work is behind you, the rest is automatic.

The items on the list you use should have between seven and twelve letters, inclusive. Feel free to personalize the list. Six or fewer letters simply won't work mathematically. Hence, mere loving is not an option, but good loving is fine!

Here's where the mathematics comes in:

Similar properties hold for any odd-sized packet. For instance, the middle card in a packet of size seventeen remains there through any number of dealing (spelling) out of at least nine cards, dropping the rest on top as a unit. The general form of the elimination deal is this: always deal into two piles, left to right, and set aside the one of even size, continue, dealing the odd sized one each time till only one card remains. It's the one that started in the middle.

Author Colm Mulcahy teaches mathematics at Spelman College, in Atlanta, Georgia. He publishes original mathematical card trick principles every two months at MAA.org. Deeper explorations of the deal at least half of the cards and drop the rest on top move above formed the basis of the very first Card Colm in October 2004. (We highly recommend the three-scoop ice cream trick there!) Another twist on that appeared in April 2011.

All of this and much more will soon be available in his "Mathematical Card Magic" book from AK Peters. While a youngster in Dublin, his grandmother often took him to Whitefriar Street Church, which claims to contain the remains of St. Valentine.

Thanks to Spelman College's Dan Bascelli for some photos, and Vicki Powers for decades of heartfelt romance.