Oct. 17, 2014, I walked into the courthouse and obtained my divorce, all by myself. I felt it was fitting, since I had felt like I was alone in the marriage.

Dec. 3, 2014 was the first time I heard the gun shot in my head. It was the day my dad left to go to Asia for 10 days. As I sat all by myself in the neurologist's office, he hit me with the startling truth that I might have Parkinson's disease at 37 years old. I came home that night, and sat alone. Alone for 10 days with my thoughts and a truth ripping through me like a knife.

Dec. 30, 2014, I was alone in the room as the tech fired another gunshot. She told me my DATScan revealed I indeed had Parkinson's. "Parkinson's," she said flat, emotionless.

Dec. 31, 2014, the following day, as my father stayed in the waiting room with my daughter, I walked into the neurologist's office again, all by myself, and I heard those fateful words, "Yes, based on symptoms and your test results, you do have Parkinson's disease."

The following morning, I awoke with the sun, a new year and a new life, alone. I planted my feet firmly on the ground and said, "This is not how my story will end."

On Jan. 4, I single-handedly began my blog, and one week after that I began developing Lit Within, my social media network/app.

Since that time, I've turned that fateful news around. I'm rebuilding my life, and only allowing positivity into my world. I have been growing Lit Within and expanding the concept. I've turned this blog into the beginnings of a movement. I founded a nonprofit which I hope lights up the world. I've officially become a motivational speaker. Alone, I have formed relationships with APDA (American Parkinson Disease Association), the Michael J Fox Foundation and National Parkinson Foundation. By myself, I am pushing my body to depths that most healthy women can't touch. I completed a 7-mile/25-obstacle Navy Seal style mud run. Now, I'm solely training for the American Ninja Warrior tryouts next year, in spite of a movement disorder. Most importantly, I'm touching lives every day.

I've had countless family, friends, and strangers tell me how strong I am. Truth be told, I've never felt strong. I'm just me. I know my flaws and sometimes it's difficult to see past my perceived shortcomings and into the light of my profound attributes. And no matter how many times other people tell you something, you have to see it yourself, in order to believe it.

But, as I sat in the car alone recently, I had an epiphany. It came as I was listening to a Taylor Swift song. All I've ever wanted my entire life was for a knight in shining armor to sweep me off my feet. I've yearned for a strong male to show me the kind of romance you watch in the movies. I've envisioned my husband/partner/boyfriend hugging away all my fears, wiping away each and every tear, and promising his non-dying love. Like Taylor Swift, and most every other woman in America, I've been waiting for the fairytale. Like Taylor, I've been waiting for my Prince Charming to say, "Marry me, Juliet, you'll never have to be alone. I love you, and that's all I really know."

There are things I fear, like spiders! I am ridiculously fearful of spiders. But, the one thing I've come to realize that I do not fear, is to be alone.

What I realized this morning is, I have been alone. For most of my life and certainly this past year, I've risen with the sun, conquered the days and laid down to rest at night all by myself. I've been solely shot up by life and survived, without so much as the help of a strong man.

Now, this isn't to say, I haven't had any help. I don't know where I would be with out the love and continued support of my dad and the rest of my family and friends and my amazing web developer. I'm also not saying I never want to have a partner in my life. But, what I now know is that it isn't necessary to HAVE a man. My happiness is based on my light within. I am only dependent on myself and myself alone.

My point, is that my entire life has been spent looking for a hero. Unknowingly, that's what I've become, all on my own. 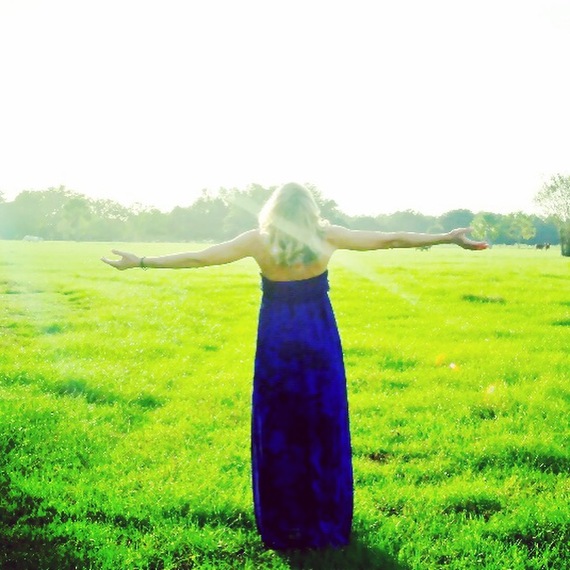