If you've read my previous essays, you know that I am not an early adopter.

Like you, I am a seeker. But, honestly, I fear change.

OK, so you are probably already aware that there is a White Courtesy Phone that puts all seekers in contact with other beings vibrating at higher frequencies whenever we need better understandings of the learning and growth opportunities that the universe presents to us.

As the saying goes, "When the student is ready, the teacher shall appear."

Unfortunately, however, that teacher often appears in the form of a foreclosure notice, an automobile or bicycle accident, the human papillomavirus contracted from your spouse's new paramour, or getting fired from the only job you ever loved only to find out you were replaced by your assistant... and then sometime later a fellow seeker appears to explain why you were presented with that learning or growth opportunity.

Thanks a bunch! Could you NOT have imparted these morsels of wisdom BEFORE the excruciatingly painful tragedy took place??? 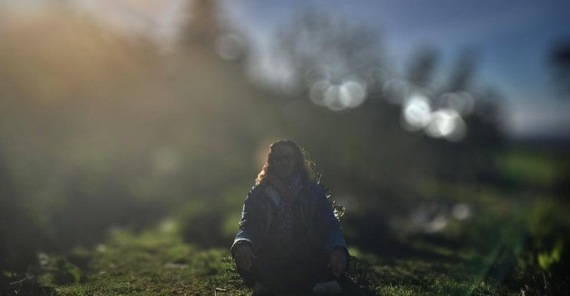 Along the spiritual path I've met some relatively remarkable fellow seekers. People who dislike me sometimes politely refer to me as a "starf**ker" (as if it doesn't get back to me); people who appreciate me say things like, "Oh Ira, he's like a moth or small child... he's attracted to shiny objects." I'm simply prepping you for a wee bit of namedropping - however, the people mentioned below really do fly in my orbit and most of them I met haphazardly at museums, meditation groups, kirtans, workshops and yoga classes. (Just imagine the names I could drop if I had gone to rehab!)

Before I recount my Hindu Bar Mitzvah, let me outline the last two weeks of my life in Los Angeles - just to put everything into context.

In between seeing patients, writing about mindfulness and yoga therapy, and preparing my workshops, here's a smattering of daily life in Santa Monica:

July 14 - Lili Haydn is playing and Donna De Lory is going to sit in. Met Lili at a health food restaurant in 2004, she and her fiance Itan came to my last dinner party, and I truly love her music - she really is the Jimi Hendrix of violin. Met Donna in a yoga class and have seen her perform many times - she is awesome - I love to watch her perform!

July 17 - Lunch with yoga DVD producer Yariv Lerner who approached me in a yoga class because he enjoys my writing. Wow... thanks Yariv!

July 19 - Nicole Daedone's OM (Orgasm Meditation). Daniel Pinchbeck invited me to dinner in Berkeley in 2009 and Nicole was seated next to me and then I chatted with her at our friend Dorka Keehn's booksigning in 2011 - have always wanted to watch her lend a hand to a damsel in distress. Mucho interesting.

July 22 - Two hour somatic therapy session to try to get Ira back into his body (apparently sometimes he just floats off - "Earth to Ira, Earth to Ira!" many healers have been inclined to yell) and then full-moon kirtan featuring Govindas, Shiva Baum, David Watts, Momo Loudiyi and amazing food by Darshana Thacker. Since Gurmukh stopped serving dinner at her home after Sunday class, this kirtan is the most lovely, loving, and ego-less gathering left in LA.

July 23 - Taught a couple of super-models yoga for the first time - they were delightful and wildly sophisticated and highly intelligent and intensely precocious and really really nice... and married and homeowners and young enough to be my children... I felt really old.

July 25 - Get an email from an Academy Award nominated actress and lovely human being who I met at neighbor Tierney Gearon's house a few months ago - she is interested in attending my workshop in September. Will be intimidated and nervous if she actually shows up.

July 26 - 90 minute soul retrieval session with a medicine woman - it goes swimmingly and the prognosis is ebulliently soulful. Then, like any diehard New Yorker, I rush to see "Blue Jasmine" opening day matinee. Woody Allen's best film in twenty years. Both Cate Blanchett and Sally Hawkins should win Academy Awards.

(Intentionally leaving out amazing massages with Antonia Perensky, one sauna, amazing acupuncture sessions, and countless vegan meals at Golden Mean - because I don't want you to think that I'm indulgent or frittering away my life).

OK, so now you people back on planet earth know how we woo-woo seekers out here in La-La land bide our free time.

All of the above seeking notwithstanding, whenever anyone asks me my religion I still respond as I always have: "I'm a Practicing Musician." On the other hand, I know that when Hezbollah or Al-Qaeda takes over whatever airplane I am on, the next voice we hear will be "Uh, would Mister Israel please step to the front of the plane...."

OK, two more tidbits of information before I tell you about my Hindu Bar Mitzvah:

1. Viewing the film "One Track Heart," I was astonished for one particular reason that I believe was lost on many people: did anyone else notice that 95% of the followers of Neem Karoli Baaba - all of the major Das's (Krishna Das, Lama Surya Das, Ram Dass et al) - grew up in East Coast suburbs and were raised in the Jewish faith? Was there some sort of epidemic that caused young, highly educated, Jewish men to flock to India and explore Hinduism and Buddhism?

2. David Lynch gave me a scholarship to study Transcendental Meditation in 2006 and like Jeff Goldblum's character in "Annie Hall" (I feel so stupid and cliche admitting this)... I lost my mantra. I can remember every course of every meal that I had at the Chateau Marmont during the past twenty years but I can't remember one monosyllabic sound. Pathetic. I made a commitment to practice TM twice a day for twenty minutes at a time and I didn't even last two months. I know that my TM mantra has an M sound and an R sound but no matter how hard I rattle my brain it won't come out.

Now I'm ready to tell you about my Hindu Bar Mitzvah.

Back in 2000 when my dear friend Sabine Chaloupy took me to see her guru Amma in New York City, let's just say I that was ready to pooh-pooh the whole thing. Hugging? Really...? Are you serious? Whatever....


Never one to be dissuaded by throngs of gorgeous, hip, interesting, compassionate people and sumptuous meals, I have sat with Amma every time she has been within 100 miles of me during the last thirteen years. In particular, I cherish the time I spent at her ashram in San Ramon.

I always receive darshan on the first morning when it is least crowded. This year was no exception. After darshan I spend as much time as possible meditating in her general vicinity. I haven't actually felt much during her hugs for the past ten years but I believe that her hug is akin to some kind of attunement that opens me up. Under the definition of 'neurotic' in the dictionary there is a picture of my cerebral cortex, but when I sit with Amma I can be peaceful and blissful for hours.

However, for the past thirteen years I have resisted becoming a devotee because it means accepting Amma as my guru and making the same commitment that I made (and broke) to TM. I'm usually of the "If-you-meet-the-Buddha-on-the-road-kill-him, No Guru No Method No Teacher" ilk.

I was meandering around on Saturday evening after the Devi Bhava ceremony when a volunteer approached me and asked if I wanted to take a mantra. I immediately recoiled but then considered how much my meditation practice could use a jump-start. "Absolutely," I heard myself say and then was led to a small group of fellow seekers, given mantra instructions, and then led to Amma for her to whisper my mantra in my ear.

Many of my professional colleagues pooh-pooh Amma and obviously I was somewhat skeptical if it took me thirteen years to take a mantra.

Happy to report that I have been using the mantra for some time and can attest to its efficacy. Totally jump-started my meditation practice and took it to another level. Meditation is now actually enjoyable, less of a chore, and I honestly look forward to reciting my mantra. Weird - right?

I am not an early adopter. 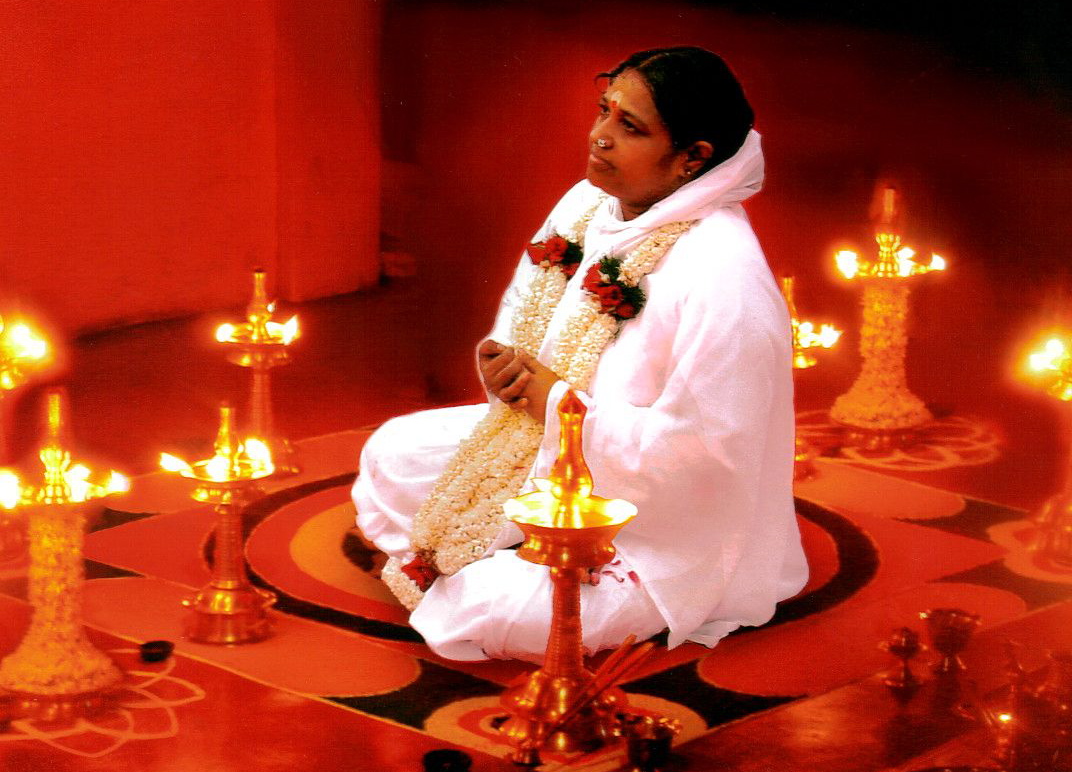