For me, the Francis Effect has pretty much worn off.

I'm giving up on getting all optimistic and goosebumpy about Pope Francis and the breath-of-fresh-air tone he's setting for one of the world's largest and most powerful international institutions.

True, true. Pope Francis says nice things like, "Who am I to judge?" He does amazing things like embrace a severely disfigured man as the world looks on.

And it seems Francis might eventually bring some order to the inner workings of the Vatican and its bank.

Not to mention Francis's plan to turn the church's attention back to serving the poor, which reverses the policy of his two predecessors. That's terrific. Except that that old liberation theology phrase, "preferential option for the poor," has never set too well with me. God prefers the poor? I don't think so. 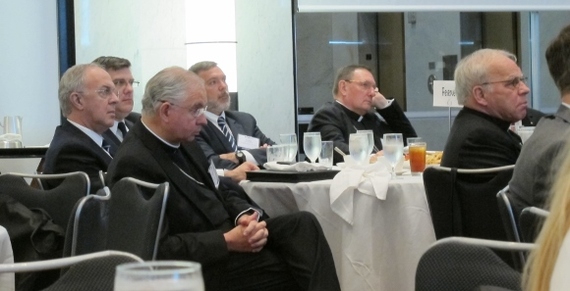 Representatives of the Catholic church at the Religion Newswriters Association meeting in Philadelphia were mostly men. Photo by Barbara Newhall

And, of course, Francis got the Cubans and the Americans talking. Good job. Too bad similar blandishments didn't work on Israel's Shimon Peres and Palestine's Mahmoud Abbas. But good try.

No doubt about it, Pope Francis is a warm-hearted, forward-looking man.

But wait -- I'm not so sure about the forward-looking part. Here's why:

This is a (celibate) guy -- and a church -- who are telling married women and men that God does not trust them to take charge of their reproductive lives, to make decisions for their family's economic stability and to know the limits of their ability to fully, attentively parent their children. That sex for sex's sake is not OK with God. That God does not want married couples to use birth control, because God and God alone is in charge of how many babies a man and a woman shall produce, rear and support.

Where's the forward movement in that?

And where's the reform in Pope Francis's decision to kick off his Year of Mercy with a -- temporary -- mercy for Catholic women who have had abortions? For the next year, women who have had abortions can go to their priests for absolution and reinstatement into the church. They won't have to go through the humiliating extra hoops of taking their cases to higher up church authorities. 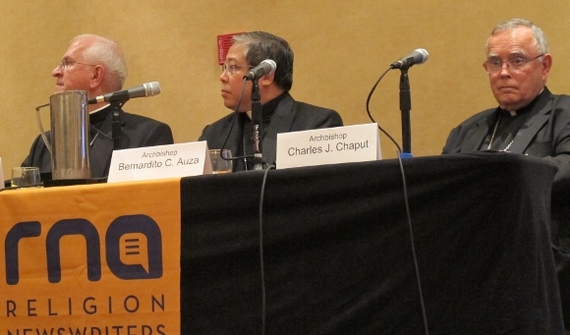 But what happens when the year of mercy is over? Church authorities -- male human beings -- will once again be authorized to decide whether a woman who's had an abortion can be absolved of her sin.

The church -- and its male hierarchy, headed by the pope -- comes down plenty hard on many issues. But it's not the issues that are igniting this -- for me unusual -- rant.

It's that hierarchy, that top-down earthly authority.

A lot of people around the world, Catholic and otherwise, have been charmed by the breath of fresh air that is Pope Francis. I too had been feeling the Francis effect -- until a couple of weeks ago.

That's when I got a close-up look at the Catholic hierarchy in the flesh. And it was pretty much male flesh.

The occasion was the annual conference of the Religion Newswriters Association, held this year in Philadelphia. I listened as four -- count 'em four -- archbishops and a passel of Catholic priests and lay people briefed religion reporters on church doctrine and the pope's upcoming visit to the U.S.

There was a sprinkling of women on the dais, but mostly it was men speaking for the Catholic church. A phalanx of smart, skillful, socially adept, articulate, ambitious men.

I'm not a Catholic, so maybe it's none of my beeswax what the pope and his bishops say about religious liberty, birth control, divorce, extra marital sex, and same-sex marriage. I'm not affected, for example, by papal pronouncements on the so-called God-given rightness -- the "complementarity" -- of marriage between one man and one woman.

However, it is my beeswax if I'm an employee who's denied birth control coverage or who's been fired because I'm in a same-sex marriage.

I'm not the only one to have opinions on these issues. So do U.S. Catholics. A new Pew Research Center survey sheds some light:

Fewer than half of U.S. Catholics surveyed said that homosexual behavior, remarriage without annulment, cohabitation, and the use of contraception are sinful. A full seventy percent said it's OK for a husband and wife to choose not to have children.

Is the pope listening?

The Pope of Surprises

Pope Francis is a man of surprises. He has declined to live in the luxurious papal apartments. He calls old friends on the phone out of the blue. He speaks off the cuff to the press. He washes the feet of women and Muslims.

"He's in nobody's pocket," said one of last weekend's powerful men in black, the Rev. Thomas Rosica of the Holy See press office. Pope Francis is his own man.

OK then, Francis, pope of surprises. Surprise me. Let go of some of that churchly power. Start maybe by acknowledging that women and men are fully competent to decide when and if they will try to get pregnant.

I'm pretty sure that God trusts people with those big life decisions. Why don't you?

Barbara Falconer Newhall is the author of "Wrestling with God: Stories of Doubt and Faith." A version of this post first appeared on BarbaraFalconerNewhall.com. If this essay resonated with you, you might like "The Hagia Sophia -- Mosque, Church or Battleground?" Also, "Why Are All Those Catholics So Darned Catholic?" 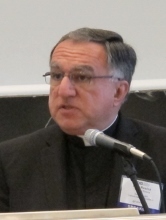