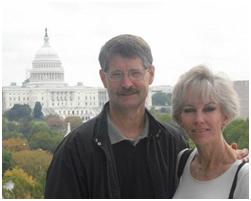 "I could never work with my husband." Or, "You poor bastard."

That's what people told me and Darrell when, as newlyweds, we started working together. It's been more than eighteen years, and -- at the risk of jinxing everything -- I'd like to share a few theories about why we... work.

2. We're too busy to squabble.

3. We have well-defined areas of responsibility, and they rarely overlap. When we were dating, Darrell was amused and horrified by my accounting system. I'd record check numbers -- and the amounts of each -- on the back of that little pad, and when I ran out of checks I threw the whole thing away. I'd only been overdrawn once, my credit score was impeccable, and I was saving a big chunk of my income. But going all spreadsheet on myself? Forget it. Darrell's in charge of bookkeeping, and we're both very happy about that.

4. We edit each other for accuracy and tone. The late great Cosmo editor Helen Gurley Brown said everyone needs an editor. Darrell and I edit almost every bit of correspondence the other proposes sending, and you might not believe how many problems we avoid. On the one hand, how would we know? On the other, we spend almost zero time cleaning up messes -- so we must be doing something right.

5. We operate with what a consultant friend calls absolute mutual respect. When Darrell tells me something I plan to post doesn't have a point, I take him seriously -- even when I think the problem is him. When I tell him one of his pitches is boring, the same. Both of us have to say yes or the answer is no.

6. When we agree to disagree, the one in charge has the deciding vote. I have a very distinct writing style. I think! A lot of people might say "very" is an extraneous word in the sentence before last, including Darrell. But for better or worse, I write like I talk -- so I win. Darrell sometimes takes seven paragraphs to describe what I'd cover in three. He insists that much detail is essential, I can't prove otherwise -- so he wins.

7. We respect each other's differences. I'm on a neverending self-improvement quest, so I welcome criticism. Even, or perhaps especially, if it stings. Darrell thinks he's fine just the way he is, so I tread carefully with any...suggestions.

8. We crack each other up. "I've never seen anyone so eager to do a better job at life," Darrell said. "That's the nicest thing anyone's ever told me," I said. "Really?" he wondered. "Sure, because it encompasses everything," I told him. "Want to fool around?" he said.

9. We know our limits. The answer to the question posed in number 8 was no. Working at home has its distractions. The neighbor's dog, the laundry, the item in the online trade magazine Darrell thinks I'd be interested in. I never thought I'd be a good candidate for working from home because I'd be lonesome. With Darrell it's a different story. I took my favorite colleague and set up shop with him. He doesn't bore me -- or if he does, there's no laughing to be polite. And then we laugh about that. But we work hard, seven days a week. Six days a week it's in an office barely bigger than a closet. When he moves in for a romantic kiss the response is usually, "Too many inputs!" When it isn't, that's special. Which is rare. That's what special is.

10. We work hard. Neither of us has once accused the other of not pulling enough weight.

11. It's interesting. We think we know where we're going -- but most of the time we have no idea how to get there. I've often joked if our business had a logo it would be fog.

12. We have fun. I laughed so hard at something one of my guests said on the talk show I thought I was going to fall off my chair. We take at least a couple of weeks a year -- and plenty of breaks in between -- to do nothing more strenuous than decide where best to watch the sunset. We never miss our daughter's tennis matches or band concerts. We snuggle in darkened television studios, watching Katie and her brainiac friends tape high school quiz shows -- delighting in the concentration, the scrunched-up faces in that second or two between hearing a question and deciding if they know the answer. I talk to a best friend on the show, wondering if I've ever had more fun in my life. Then I realize it was only an hour before that, when I interviewed a high-powered lobbyist about everything from animal rights to texting while driving.

Is there such a thing as making it? And can it be any more fun than doing it? Maybe we aren't entirely sure where we're going. Who cares? We're having so much fun getting there!

What I feel the best about is how much laughter there is in this house. Darrell and Katie and I never laugh just to be polite, as I mentioned, and we are laughing all the time.

13. We're happy now. I did one thing right recently. I got the squirrel bungee out of storage. Darrell attached an ear of corn to it and hung it from a tree we can all see from our screens. Watching the squirrels try to nibble off of it is as much fun as watching a baby try to pick up a Cheerio for the first time. Maybe more, because the squirrels never seem to get it. Add the neighbor's cats to the party, throw in a blackbird or two, and...well, I should get back to work!