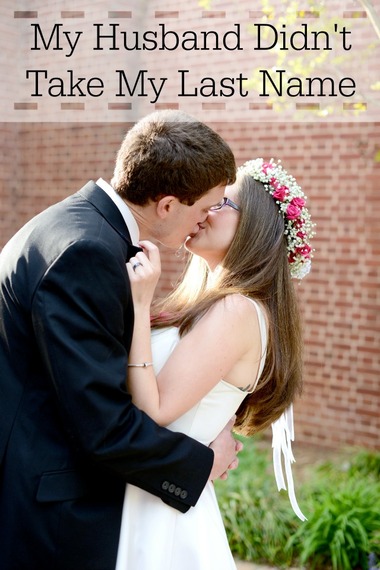 My husband and I do not share a last name. We might joke about being the Flongs, but his last name is Fleck, and mine is Long.

When Dan told me he didn't plan on taking my last name, I felt like less of a woman. My femininity is completely wrapped up in his last name. When we're out with friends and family, and someone calls him Mr. Long, he corrects them, and I feel embarrassed. Do they think he wears the skirt in our marriage because he didn't take my last name?

I know Dan loves me, but sometimes I worry he's not committed to our marriage. Since he didn't change his name when we got married, it will be easier for him to resume his bachelor status if he decided to divorce me.

I've always considered a name change at marriage as a symbol of marital vows. Never mind all the stuff we said about staying together and loving each other for better or for worse. The vows we made before God and our families have considerably less significance than his decision to retain his bachelor name.

So what if we've combined our finances, and moved in together, and made life-changing decisions as a couple? As long as he goes by "Fleck" instead of "Long," I'll always doubt his commitment to our marriage.

I feel like I'll always be second to my mother-in-law. I mean, Dan's decision to keep her last name instead of taking mine is like he's choosing her over me. It's his mom's last name, so he still has a woman's last name regardless. Everyone knows that a boy's last name is just temporary. When a girl is born, and her parents write out her full name on her birth certificate, that is her name for life. I don't know why hospitals don't just use pencil for a boy's last name, since it really belongs to his mom and not him, and he's supposed to change it at marriage anyways.

If the name "Fleck" is that important to Dan, I don't know why he couldn't just take it as his middle name and add Long as his last name. It's not like his middle name has any family significance. Who cares if he's named for his godfather, his Uncle Jim? Naming traditions don't really mean anything to men.

And don't even suggest that we should have hyphenated our two names. If I had a hyphenated last name, everyone would think I'm not woman enough to control my husband. Clearly what strangers think about my marriage is the most important factor to consider when making decisions.

At least any kids of ours will have my last name. As a woman, it's a biological need of mine to create offspring and have them tied to me with a shared last name. I don't really know how Dan will feel connected to our kids since the only really important part of being a family is a shared last name, but he should have thought about that when he refused to take my name.

But what can I say? I love him, so I was willing to compromise on his last name. He's just lucky that wasn't a deal-breaker for me. Obviously it's completely reasonable for a woman to give such an ultimatum to her fiancé. It's not at all abusive or sexist or ridiculous to tell a man he must change his last name or the wedding is off.

Read the original, unedited version of this post at Belle Brita.