Already a hip-hop pioneer, rock and roll hall of famer, punk bassist, music video producer, Tibet activist and prolific MC, Adam Yauch of the Beastie Boys can now add sports documentarian to his long list of titles. This Friday, Yauch releases his new film, "Gunnin' for That #1 Spot", a glimpse into the world of elite high school basketball against the backdrop of Rucker Park, Harlem's historic streetball homecourt. Back in September 2006, the country's best 24 high school players competed in the first ever "Elite 24" all-star game. Yauch followed the stories of eight players, including Kevin Love, Jerryd Bayless and Michael Beasley, all projected to be lottery picks in tomorrow's NBA Draft. On top of the documentary, Adam (or as Beasties fans know him, MCA) is in the studio with Mike D and Ad-Rock working on a new Beastie Boys album for release next year. He talked to the Huffington Post about the release of his new film, the current state of the Free Tibet movement, the Summer Olympics, and why Brooklyn should secede. 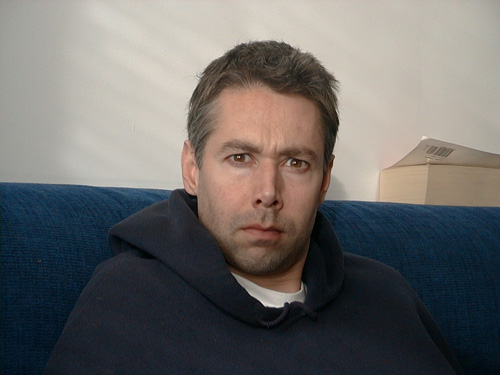 People might be surprised to hear that a Beastie Boy made a basketball movie. What were you trying to achieve with Gunnin' for That #1 Spot?

It seemed like a good idea at the time. This high school all-star game was coming up and it just seemed like it would be interesting to document that and take a look at this world of elite high school basketball. I was trying to achieve a couple of things. I think one was to just document this world, these top players, their environment and what their lives are like. In the second half, I show them hanging out together in New York and competing in the game in Harlem's Rucker Park. It was interesting to get to know them and watch them compete against each other.

While 24 high school players took part in the game, you only chose to document eight of them. How did you whittle down who you profiled?

I didn't end up whittling it down actually. My intention was to follow eight players and then cut it down to five but I actually liked all eight of them so I kept them all in the film. So, there was actually no whittling done. 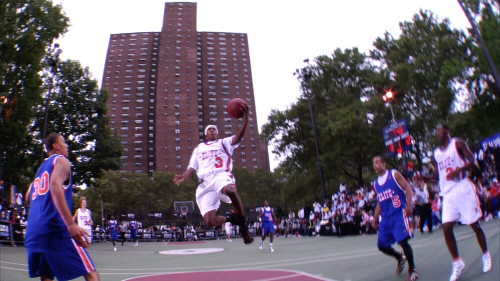 Your film premiered a few weeks ago at the TriBeCa Film Festival. What was the reception like there?

It was great. It was a really good screening, it was a big room full of people, good sound system, good projector, everything was tight. I had been to several press screenings prior to that and I had seen where the film was dragging or what needed to be tightened up or flushed out, and so I kinda got it where I felt like it needed to be and that screening felt great. It was really nice.

Did you feel like your reception at TriBeCa was unique from the other filmmakers there because you're a Beastie Boy?

Maybe. Some people may already feel some sort of familiarity because of that. I can't be sure.

Four of the players you profiled are expected to go high in Thursday night's NBA draft. Do you feel like you have a bigger stake in the draft this year than in year's past?

Yeah, I never knew anything about anybody who was in the draft before and I'm actually going to the draft on Thursday. I'm psyched to see these guys come into the NBA and play, I'm looking forward to it.

You're from New York. I assume you're a Knicks fans?

I haven't been for a long time. Since they haven't been doing well. But I'd be psyched if one of these guys like Jerryd Bayless or Kevin Love winds up on the Knicks, it would be cool.

I don't think Kevin Love will be available for the Knicks.

Maybe so. We got the sixth pick. We'll see where he winds up. 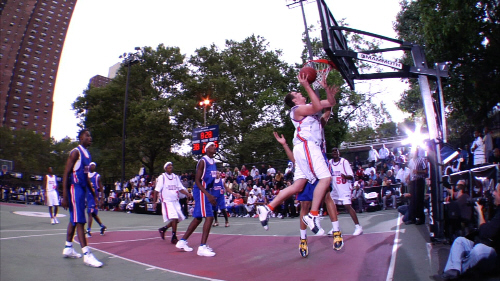 Kevin Love powers to the bucket

What's going on with the Beastie Boys? I hear you're recording an album.

Yeah, we're recording now, working on stuff. It's probably coming out early next year, something like that, depends on how it goes, but that's the game plan.

What can we expect?

You know, some music and rhymes and what not.

Do you feel like after the new album, the experience of making this movie might take you away from music for a while to focus on film. 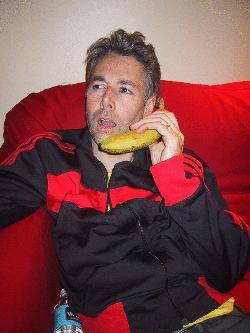 How would you compare the experience of making a documentary film to producing and writing an album?

I guess in some senses it's similar because you keep working on something, keep chipping away at it until it takes shape. It's a whole series of small creative decisions that ultimately create a much larger thing. But one big difference is that in film you really do have a production stage and then a post-production stage. You're shooting and then you stop shooting and you're editing. I mean I still run out and pick out some extra things if I need them a little bit, but in music we don't usually record that way. I guess some bands do. Some bands go in and they track all their stuff in a couple of days and then spend a few days mixing it, but we tend to record as part of the creative process. We'll record a little bit and see what the song needs and record a little something else, keep on overdubbing on stuff or editing it, making it what it needs to be. Because of what it costs to make film it kind of forces you into this mode of separating your production and your post production.

The music for the film is a lot of hip-hop and funk. What was your method for producing the soundtrack?

You do some really beautiful aerial footage of New York in Gunnin'. In terms of the cinematography, where did you learn how to choose shots, shoot from the sky and in general, be a filmmaker?

Yeah, I shot all that stuff. I mean I wasn't flying the helicopter, but I was up in the helicopter. That's the stuff I know best from making music videos all these years. I feel that working with the camera and editing it is actually my strong suit.

How did you get involved in the Free Tibet Movement?

My first real exposure to it was meeting a bunch of Tibetans that were fleeing from Tibet. I was in Nepal, and I met a group of Tibetans that had just come over the Himalayas that were heading to Dharamsala to hopefully meet the Dalai Lama and fleeing from the oppression they were facing and from that firsthand exposure, I started getting interested in it.

You were traveling at the time?

Yeah, I was trekking in Nepal.

Back in the mid-90s you founded the Tibetan Freedom Concert. How do you view the Free Tibet movement now as compared to back then during what seemed like the heyday of American Tibet activism?

There was just more awareness among a certain generation of people back then. But since March 10th of this year, since the Tibetan uprising, there has been a lot going on in terms of activism.

How did you view the March protests in Tibet?

I had a lot of mixed feelings about it. Certainly, I was terrified for what might be happening to those people, but in a way excited that people were rising up. It was a pity that the Chinese media took some select acts of violence, the few incidents where Tibetans acted violent toward Chinese and ran those incidents on Chinese television again and again. This was really dangerous, because it created a lot of racial hatred from young Chinese people towards Tibetans. It was really a pity that the Chinese government went that route.

How do you think the Beijing Olympics will impact the Tibet movement? Will the celebration of China increase the ability of the Chinese government to oppress Tibet or will the renewed focus on the China/Tibet issue galvanize the rest of the world to speak out for Tibetan freedom?

Let's move to another hot political issue. As a Brooklynite, how do you feel about the Nets coming to Brooklyn?

I think it's great. I think Brooklyn needs a team. Ever since I was a kid, my mom would always say Brooklyn really lost something when the Dodgers went to L.A. She felt that the Dodgers were a big part of Brooklyn's identity, and hearing my mom say that always made me feel that Brooklyn should have its own baseball or basketball team. When I first heard that the Nets were coming to Brooklyn, I was so psyched. Brooklyn needs to secede and be its own city again. 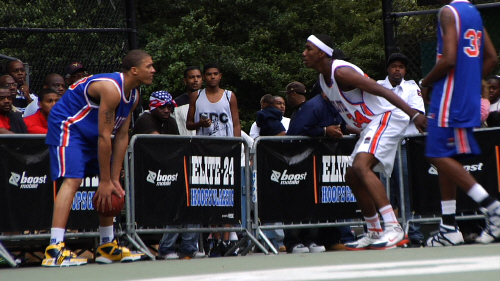 Michael Beasley about to 'shake and bake' Donte Greene

Are there any plans for a follow-up, another documentary, or basketball film?

Not specifically, I don't have a plan for a follow-up, but I'm sure when the right project gains enough momentum then it'll be time. Sometimes those things just kind of fall together.

In making this film did it change or affirm your feelings about the significance of basketball in New York City?

It's just a game, but it does mean a lot to a lot of people. Especially what it means in Harlem and up in Rucker it's definitely an interesting stage for people to interact on. I love the flow of the game. There's a certain fluidity to basketball. I don't enjoy watching baseball or football in the same way.

This being the Huffington Post, I have to ask, who are you behind in the election?

How can you be so sure?

Thanks for taking the time to talk, Adam. Best of luck with the film and the new album. 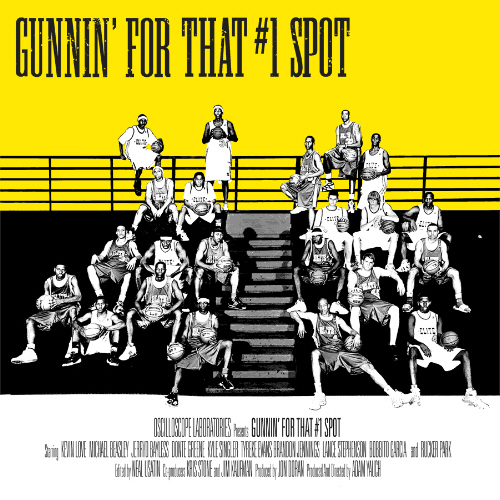 Trailer for Gunnin' for That #1 Spot

For a listing of theaters showing "Gunnin' for That #1 Spot", click here.