Last week, I met Vanguard founder Jack Bogle in his office for a video interview. I had asked him if he would be willing to endorse a crowdfunding campaign to help underwrite the production costs of Trade-Up.

Trade-Up is the financial television show Wall Street doesn't want to air. It will give investors responsible, academically based investing advice in an edgy, humorous and entertaining way.

American Public Television has agreed to distribute Trade-Up to its public television affiliates nationwide. It's my responsibility to raise the $1.5 million necessary to fund the first 13 programs.

The financial media's usual corporate sponsors often have a vested interest in the kind of irresponsible "advice" you see daily on CNBC and its competitors. The securities industry is a major source of revenue for these outlets. Their programs are a 24-hour infomercial for the discredited notions of market-timing, stock-picking and active fund selection, all of which enrich brokers and mutual funds at the expense of investors.

I give great credit to American Public Television, which has shown the vision and independence (public television is, as you know, non-commercial) to distribute a program that's really in the best interest of the investing public.

A bronze statue of Mr. Bogle greeted me as I arrived for our interview. It graces the entrance to the building on the sprawling Vanguard campus that houses his office. At 86, he is gracious, charming and feisty as ever. He did the interview in one take and gave a ringing endorsement of Trade-Up. I will post the clip as soon as it is available.

In the interview, we talked about Mr. Bogle's idea to start Vanguard almost 40 years ago. His plan was to create a mutual fund company that put investors first (imagine that!) by offering low-cost index funds. An even more radical idea was to make purchasers of these funds shareholders in his company. He told me both these concepts were unheard of at the time. He could not recall getting any support for them.

It took nearly 20 years for Vanguard to catch on with the investing public. I asked him how he held on. "Passion and perseverance," he told me.

He encouraged me not to be discouraged with the obstacles facing my own project and to continue my efforts in getting Trade-Up on the air. He believes investors need and deserve a program that puts them first, the way fiduciary advisors put their clients first.

Jack Bogle is a real American icon and a hero to many of us who strive to make the lives of investors better. He fought against entrenched interests that continue to plunder the savings of hard-working Americans. His story of triumph is the stuff of legends.

I left the interview inspired and more dedicated than ever to my work in investor advocacy. 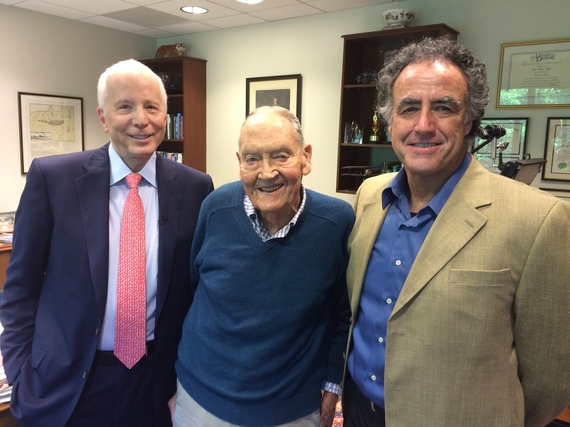 Dan Solin is a New York Times bestselling author of the Smartest series of books. His latest book is The Smartest Sales Book You'll Ever Read.