The Best Man is one of my very favorite movies. I love it. Beautiful girls, cool guys, characters who are really like people you know. So I was very excited when I heard that director Malcolm D. Lee was bringing a sequel -- The Best Man Holiday -- to the 1999 film to the screen with his original ensemble cast -- Nia Long, Taye Diggs, Morris Chestnut, Monica Calhoun, Terrence Howard, Saana Lathan, Regina Hall, Melissa De Sousa and Harold Perrineau -- in tact. Last week, I had a chance to chat with Malcolm about his new film, which I also love just as much, if not more so, than the first. The film opens today. 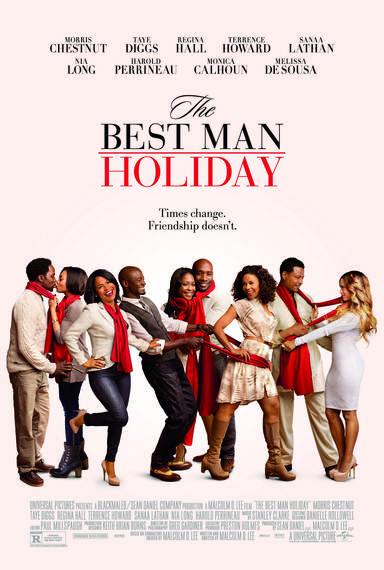 GA: So many people love your first film The Best Man. In lots of circles, it's considered a classic. Why did you wait 14 years to do the sequel?
ML: It was never really my intention to do a sequel right away. The Best Man was my first feature film and I didn't want to be known as a director who only does romantic comedies. Sequels, also, more often than not, just don't measure up, so I thought I'd leave the fans wanting more. But even then I thought that I might revisit the characters ten years later when they had a chance to live some life, and I had a chance to live some life. Because what concerns you in your 20s -- your post-undergraduate years -- is very different from what you think about in your 30s and 40s.

GA: What exactly do mean by that -- the 20s versus the 30s and 40s?
ML: When you're in your 20s you're a little more carefree, you're single. You have a very different way of looking at the world and experiencing the world. But later in your 30s when you have children, a career, career obstacles, mortgages, car payments and relationships you have to negotiate, that's a very different life. There's a little more angst. We're at the age right now (in our 40s) where certain questions start to invade our consciousness: What's my life's work? What will my life be if I don't have a child, if my dreams aren't fulfilled? Where will I be if I don't have this person with me? At the same time, when you get back together with your friends they remind you of what's good in life and why you need friends.

GA: When the first film came out you mentioned having been influenced by The Big Chill. The Best Man Holiday (BMH), however, seems more like The Big Chill than the The Best Man. Do you agree?
ML: The Big Chill had a bunch of really talented actors, a great soundtrack and the college connections that the characters shared. It's one of those movies I glean something different from every time I watch it. BMH is more like The Big Chill because the actors in the film are actually closer to the age that my actors are now and we deal with the themes of, "Oh I haven't seen you in such a long time, but here we are back together again, but we're falling back into the same relationships." What's so crazy is that yesterday when I was coming back from the premiere in LA, I was on the plane and sitting right next to me was Kevin Kline. I told him that his being in The Big Chill was a big influence on The Best Man. He was extremely gracious.

GA: Wow! Pretty cool. In doing the sequel, were you at all concerned that the fans might have moved on or might not be interested in these characters any longer?
ML: Over the years, I was nervous about it. I thought, "Oh, people don't want to see black romantic comedies anymore. But the idea kept coming back around and I kept seeing the The Best Man on cable TV. I also would see people talking on social media saying things like, "The Best Man is on! It's my favorite movie."

GA: So you knew there was some interest?
ML: Yes. At first you wonder if it's just your friends or your local community telling you that you should do a sequel, but eventually it was clearly evident that there was a desire and a hunger to revisit these characters. And I knew that getting my actors back together would create something special.

GA: What was your big goal in revisiting the characters?
ML: My intent was to make something that could stand alone as a film. Since 1999 when The Best Man came out, I've gotten better as a filmmaker. My actors have gotten better as performers, so why wouldn't we make something that would be just as compelling, if not more so? If we didn't do that why even make another film? I asked the cast if they thought a sequel was worth pursuing and once they heard the pitch, they were on board.

GA: What was it like coming back to the project after having worked on other films in between?
ML: I've grown as a storyteller and my comedic timing has gotten better.

GA: How did you improve your comedic timing?
ML: By working with other actors and having done comedies like Undercover Brother, which is a very different movie than The Best Man. I also worked with comedic actors like Mike Epps, Charlie Murphy, Chi McBride on Roll Bounce along with Cedric the Entertainer, Martin Lawrence, Mo'Nique and the late Michael Clarke Duncan on Welcome Home, Roscoe Jenkins. All very seasoned funny people.

GA: You are great at mixing comedy and drama. What's the secret?
ML: It's all about the tone you set at the onset. I had a strong vision for The Best Man Holiday, so I was able to translate that to the actors and ultimately to the screen. Things can't get too heavy or too outrageously funny; it has to strike a balance. Tone is everything. If you've set the right tone you can get away with a lot of stuff. You can get away with making people cry.

GA: What was the most challenging thing about the film?
ML: As always, the most challenging parts were the schedule and the budget. It's what I like to call "20 pounds of *&^%$# in a 5 pound bag." There was a lot of story to tell, a lot of different story lines to keep up with and a lot of actors' moments that needed to be tackled.

GA: Will there be a Best Man 3?
ML: I don't know. It's all about the fans. Sequels only happen if fans demand it. They've got to demonstrate their support on opening weekend and then we'll see.