At first, I was terrified of being in Istanbul because

a) before we left, Emma, my friend who was traveling with me, told me about this guy at our college who went there and got both his hands slashed, and

b) one of my other friends warned me not to favorite pink trench coat while visiting the city, saying it would attract unwanted attention, but I forgot and wore it despite the warning.

But this city ended up being one of my favorites from my backpacking trip across Europe because of the small miracle that happened there.

Missionary Kelly Kosky defines a miracle as "something beyond mental and physical comprehension," and that's what happened as Emma and I went to our first tourist destination: I ran into Phil while visiting the Hagia Sophia.

Phil and I went to the same college back home in the States. We didn't really know each other that well. We went to the church, had some of the same friends. I knew he was studying abroad in Vienna while I was in England, and that was it. Yet somehow, while in the same continent, we ended up in the city, in the same building at the same time. Later, I found out that he recognized me by my pink coat. 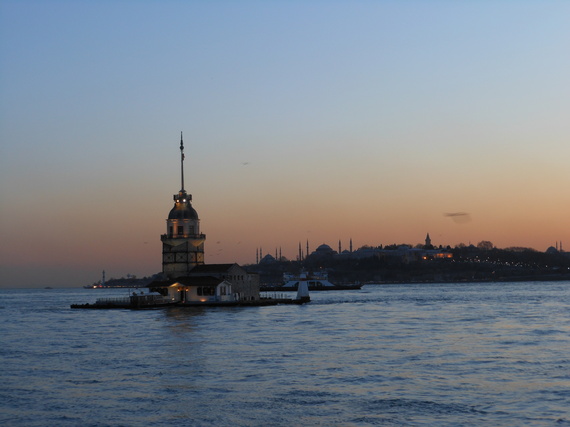 Emma and I spent the rest of our time in Istanbul hanging out with Phil and his study abroad friends. We drank tea made in double-sprouted kettles, ferried from Europe to Asia, watched glorious sunsets over the water, petted stray cats, haggled the vendors for overpriced souvenirs, and bought street food for one lira. But my favorite part of the two-day trip to Istanbul was spent in a mosque.

Originally, I didn't want to go in. It was too much of a hassle to take off my shoes and wrap my hair in a borrowed scarf. After all, I had already went into the most famous mosque in Istanbul, did I really need to go into another one?

However, unlike the other mosques I'd went into, there were volunteers here who welcomed us in and gave us a space to ask questions.

One of Phil's friends asked the question we were all wondering. "Why do you wear the head scarves?"

The mosque volunteer answered the question graciously. "I have a personality, and I want to be seen for my personality. So I don't wear tight clothes. I don't wear bright colors."

She gestured towards the coats Emma and Phil were wearing, which were blue and black, respectively. "I would wear that. That is okay."

And then she gestured towards my bright, fuchsia-colored coat; I laughed, anticipating her next comment. "But I would think twice before wearing that. Or three times."

She continued: "Women pray separately because the positions that prayer puts us in are very distracting. And uncomfortable. We pray separately not because women are considered second class or something. No, nothing like that."

"God is our creator, so he knows us the best. I do these things because he tells me because he knows what is best for me."

I don't remember what color hijab the volunteer was wearing. I don't remember the kind of shirt or the style pants she had on, if she wore jewelry or if she had her ears pierced. I don't know her name.

But I remember her passion for her religion. Her voice almost pleading for us to understand. The pre-emptive edge of defense in her actions as she explained to people who were outsiders. Her patience as she answered my uneducated questions. And I remember hearing the message: My religion isn't what you think it is. Even though I was half a world away and grew up believing in a different religion, I related to her.

I'm embarrassed to admit that it's sometimes hard for me to say that I'm Christian. Because there are associations with that label: homophobic, straight-laced, judgmental. Speaking with the volunteer at the mosque, I was humbled by her willingness to be defined by her religion. Through her patience and kindness, I was able to see beyond the confining stereotypes of it. 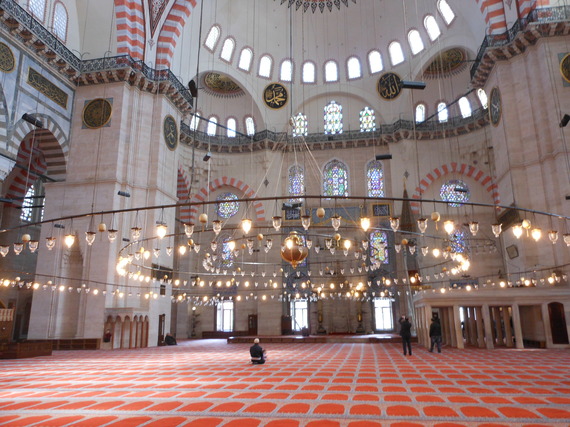 Throughout my semester abroad, I visited a lot of different cities. I'd traveled from Brussels to Prague to Budapest to Rome, went to Paris by myself despite not knowing any French, but unlike Istanbul, I was excited to explore those cities. They were anticipated, not feared.

So why was I terrified to visit Istanbul?

In the media, especially American media, many European cities are glorified. Can't find true love? Try the most romantic city in the world -- the city of lights and great food! Finding yourself a little uptight? Kick back and enjoy your new self in the most tolerant city! These other cities were backdrops of chick flicks and coming-of-age novels. They had a feeling of familiarity. Istanbul was an unknown, and unknowns can be scary. Adding to the unknown were the terrifying stories -- the only kind of stories -- I had heard about Istanbul.

Not everyone is as lucky as I was. Not everyone has the time or the money or the opportunity to travel. And that's why we need diverse stories. We need stories with different settings, characters from different backgrounds, who have different experiences and religions and heritages because of the fear we have of the unknown.

Though the stories, those unknowns get filled in. Instead of white, blank spaces, we have glistening waters and beautiful buildings. Instead of foreign, intimidating men, we see a familiar face. And instead of ignorance there is knowledge. Knowledge of the real reason why I shouldn't wear my bright pink coat. These stories serve as reminders that this city isn't always terrible and that miracles can occur in Istanbul.