"My name is Brittney and I'm an alcoholic." I stood and said that sentence for the first time almost two years ago. I definitely didn't believe that at the time, but I said it anyway. I was about 2,000 miles away from home when I walked into my first AA meeting. I won't lie and say that I didn't have visions of what AA may be like.

In my mind, I always pictured a room full of grumpy, homeless-looking people that had nowhere else to go and that was far from what I saw when I entered the room that night. When I stood up and introduced myself, they made me walk to the front of the room and get my 24 hour chip while a stranger hugged me and all of these women clapped for me. I thought to myself there is no way these girls don't drink. They are all liars, they must be forced to be here because of court. This whole thing is bullshit. There is no way these girls are my age, sober and this happy. There were signs covering the walls with steps, promises and corny sayings.

I listened to their stories, they sounded just like me. It was a ticket meeting that night, and my ticket got pulled. I had the choice to pass, but I didn't. I have no idea what I said, but I talked. I told them I was from Michigan and checked into rehab the night before. They listened, they cared. I was not convinced, but I knew I did not want to feel the way I felt the last few days ever again, so they had my attention. At the end of the meeting, we stood and said the serenity prayer while holding hands, again I was freaked out but I wanted what these women had. They gave me a book full of meeting times and their phone numbers. They were so welcoming, which was a behavior I wasn't used to from girls I just met. They told me to keep coming back, so I did and two years later here I am.

I was 14 years old when I started drinking heavily. I was always a shy person that just wanted to fit in. Once I started drinking, that problem was long gone. I was outgoing and made lots of friends. I had my first blackout when I was 14. I ended up in the hospital with alcohol poisoning when I was 15 with a .34 BAC. The doctor told my parents that I should have died while I lied lifeless in the hospital bed. These things would probably raise some flags for other people, but that didn't slow me down. After high school, my party girl behavior got more out of control, but in my eyes I was just young and having fun. I was the girl that always needed more. I was the girl that could outdrink the guys. I was the girl that always blacked out.

Almost all of my memories from the last several years, aren't my own, they're just random bits and pieces put together by the people around me at the time. It seemed like I was always getting in trouble with the law. I dropped out of college and could barely hold a job. It was almost as if I enjoyed hurting the people that cared about me the most because I had the most dysfunctional relationships. I made terrible choices and I didn't want to be that girl anymore. I thought maybe, just maybe, I could control my drinking. Each and every time was going to be different. This time I really was going to get it under control. IT NEVER WORKED. I never stood a chance of being a normal drinker.

My grandma passed away in September of 2013, and like every other problem I faced in life, alcohol was there to comfort me. Alcohol wasn't enough this time, so I started to chase that high in other ways. It was my grandma's birthday a few months later, when I woke up and decided enough was enough. I am pretty sure that she was the voice of reason in my head that morning. I booked a flight from Michigan to Arizona to check into rehab the next day without telling anyone. This time it was for me. It wasn't for a judge, it wasn't for my boyfriend, and it wasn't going to be temporary. I knew I needed to change.

I have cried A LOT. Recovery has not been easy; it is really freaking hard sometimes! I have had to face a lot of demons.

"Once the alcohol was gone, my problems were still there."


I had to be open and honest. I had to make amends, and I had to accept it when people didn't want to hear what I had to say. I've shared my deepest and darkest secrets. Even though it's hard, it also feels really good. I'm able to make friends without the crutch of drugs or alcohol. I let people get to know the real me and they love and accept me for who I am.

Sobriety has given me everything that alcohol took away from me. I have a great job, which I show up to. I am finally finishing college (better late than never) and pursuing a degree that I am passionate about. I learned to love myself, which has made me capable of loving someone else the way a human being actually deserves to be loved because I had that all wrong in the past. I am in a loving relationship with a person that loves me in a way I never thought I deserved to be loved. I have great family and friends that support my recovery.

Best of all, I am present. I allow myself to feel emotions, instead of getting so drunk that I have no feelings at all. I get to be in the moment, bright eyed and bushy tailed. I'm not still drunk from the night before, I'm not hungover, and I'm not chasing a high that will never satisfy me. Sobriety was the last thing I ever wanted, but it was definitely what I needed and I am grateful for it every day. 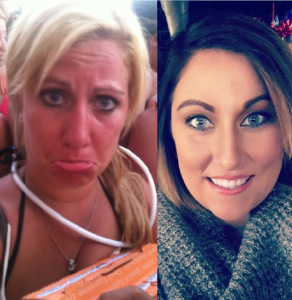