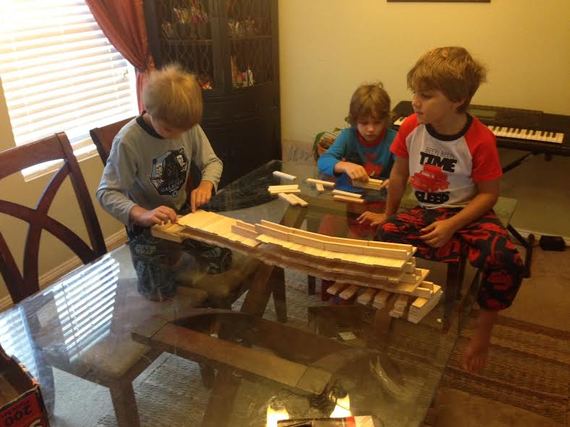 My boys are playing together just fine over in a corner of the dining room, on the glass table we never use for eating, (because it's glass and kids have twelve thousand sticky hands.) They're occupied with the Contraptions, these really fun wooden planks they like to make into tracks, so it looks like the perfect opportunity to sneak into the kitchen and cram down another of those dark chocolate brownies I made last night, even though I just got done telling them, when they asked, that it's too early in the morning to have one.

I should know better by now. I mean, I've been a parent for eight years. I should know that in a household of kids, there is never, ever, ever a perfect opportunity. But sometimes I go a little wild and get my hopes up.

So I'm in the middle of cramming, hiding in the pantry just in case they come wandering into the kitchen, when the 8-year-old catches me, red-handed, with chocolate all over my fingers (the curse of gooey brownies).

He looks from my face to my hands and back again. And then he tosses out that bad word I just love to hate: "Aw, no fair. You ate a brownie. You said it was too early for us to have one."

I think fast. "Well," I say. "I'm a grownup. When you're a grownup you get to eat whatever you want in the morning."

Real smooth, I know. Real good example of the way I DON'T want my children to eat. Well, parenting and paradoxes go hand in hand.

I get so tired of the phrase, "No fair." They have several variations: "It's not fair" or "That's not fair" or "You should be fair" and so many more I can't even remember right now, in my annoyed, flustered, I'm-so-sick-of-this state of mind. All I know is I hear them 15 billion times a day.

What I want to say every single time I hear these delightful words is, "Welp. Life's not fair. The sooner you can learn that and accept it, the better."

What I usually do, instead, because I'm a good parent, is empathize with their feelings and then explain exactly why fair isn't equal. Sometimes they understand. Most times they don't.

But I'd be lying if I said it didn't take incredible strength of will to keep calm when they're throwing out and kicking around the f-word. In fact, this is what it usually sounds like in my head:

When we're eating dinner, and their daddy and I have a glass of wine:

He gets close enough to smell and picks up his cup of milk without a single complaint. That's right, son. This stuff is NASTY, because it's cheap and it's survival.

When we're watching a movie and the boys get their cups of popcorn:

6-year-old: "Hey, no fair! He got more than I did!"
What I want to say: "Wow. Aren't you an efficient counter? You know fractions already? Because he has half a kernel more than you."
What I say instead: "Here. Have another."

Because I don't want this fight. I know what it will look like. It will look like five cups of popcorn dumped onto the floor so they can count it, and the 3-year-olds can't even count past 12, which means this will take ALL DAY.

When the older boys are sitting around during art time, and the 8-year-old decides he's going to make the most epic paper airplane ever:

5-year-old: "No fair. Jadon knows how to make a paper airplane."
What I want to say: "Stinks to be you."
What I say instead: "Here. Let's learn how to make one."

Forty minutes later we have a paper airplane that won't even fly, because making paper airplanes is much more complicated than it seems.

When it's almost nap time, and I'm telling the 3-year-old twins what they need to do next.

During dinner, the oldest is sitting beside his littlest brother, watching me feed him:

Two minutes later, the baby sneezed sweet potatoes all over his face, and I had to bite my lip to keep from laughing hysterically. Not so fun now, is it?

Kids have such a messed up definition of what fair really is. Unfortunately, that doesn't make the feeling of unfair any less real to them. All they know is they want life to work for them right now. They want it to be perfectly smooth and perfectly easy and perfectly their way.

So much about life is not fair. So many times I want to stomp and complain and throw out those same words my kids overuse. Because it's not fair that my air conditioner broke and we had to try to sleep through four days of 1,000-degree heat. It's not fair that my kids don't listen to what I'm saying 99.7 percent of the time because they have better things on their minds. It's not fair that last night, when I had just slipped into dreamland, one of them came knocking on my door to say he couldn't sleep, and then it took me three hours to get back to sleep so today I'm that much more exhausted than normal.

We're born with this complex. We all know adults who still have trouble accepting its reality in their lives. That, to me, means it's good for our kids to practice surviving "unfair," because they get to learn, in the process, that life doesn't end because something doesn't go exactly the way they planned or even hoped.

So, today, when the 8-year-old plops on the couch and says, "I want to watch a movie," and I answer in the negative, and he says, "It's not fair. My friends get to watch TV all day," and it's the sixtieth time I've heard those blasted words in an hour, I send them all outside to jump out their frustration on the trampoline. And when the last one gets out the door, I turn the lock. No one's coming back inside until dinner.

Life isn't fair, after all.