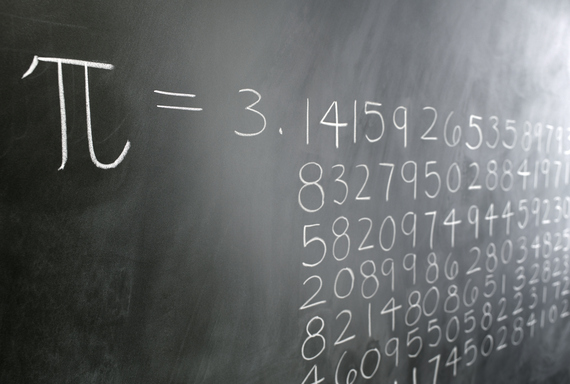 It was just 9:26:53 p.m. on March 14, 2015, and I have officially celebrated the second transcendent moment of Pi Day, the first being that same time that morning.

Some are calling it the Pi Second, although there is a controversy around the p.m. celebration, as the numbers don't work if you follow a 24-hour clock.

This year's Pi Day -- 3/14/15 -- is the only time this century that a specific date will correspond with the first digits of the mathematical constant pi -- 3.1415 -- and if you add the hour, minute and second, as I have, you have added perfectly to that perfect string:

Clearly my high school math teacher is looking down and chuckling at the irony of my writing about pi. You see, after basic algebra and geometry I was lost -- or, rather, I lost interest. When would I ever use pi? And I was right.

The number π is a mathematical constant, the ratio of a circle's circumference to its diameter, commonly approximated as 3.14159. It has been represented by the Greek letter 'π' since the mid-18th century, though it is also sometimes spelled out as 'pi' (/paɪ/)....

In ancient China, India, Egypt, and Babylonia and even in the Bible, the concept was known, and its output was utilized in many practical ways, including in building and astronomy -- both important uses still today, in fact. For example, NASA and others who are exploring space need π and rely on it day in and day out.

According to The New York Times:

Pi is irrational, meaning it cannot be expressed as the ratio of two whole numbers. There is no way to write it down exactly: Its decimals continue endlessly without ever settling into a repeating pattern. No less an authority than Pythagoras repudiated the existence of such numbers, declaring them incompatible with an intelligently designed universe.

Once upon a time, π was only calculated out to a few decimals, but as humankind progressed, the string got longer, though it seems that 39 places or so is good enough to calculate many of the mysteries of the universe.

However, having said that, the record for pushing the limit, which doesn't really exist, is currently in the trillions. Take that, math teacher!

π is magic. π is almost spiritual in its perfection -- or should I say "randomness of imperfection"? Who knows? π is perfect, or near so.

It's a place we don't understand and maybe never will, and it's useful to boot.

So why am I writing about pi?

Because I was inspired to stop for a moment tonight, to put down all my devices, to turn off all screens and instead stare out the window and contemplate infinity.

I seriously believe that Pi Day is a humbling and critical day, an inflection point for all of us. Here is the truth: Long after digital and mobile are left in the dust, long after Yik Yak and Meerkat are not even memories, π will have taken us to the outer reaches of the universe.

I don't know about you, but I find it humbling, and one of those things that reminds me of what is real and what is not.

Which leads me to conclude with a quotation from the Life of Pi by Yann Martel, who uses the symbolism to denote those things that we humans just can't comprehend:

"It is true that those we meet can change us, sometimes so profoundly that we are not the same afterwards, even unto our names."

I have met π -- again -- after many years of absence, and while I won't be changing my name, I have been profoundly moved in ways I never would have imagined.

See some pi art here. Listen to some pi music here. Open yourself to awe!

It seems to me that we can all use a little π magic in our lives. What do you think?