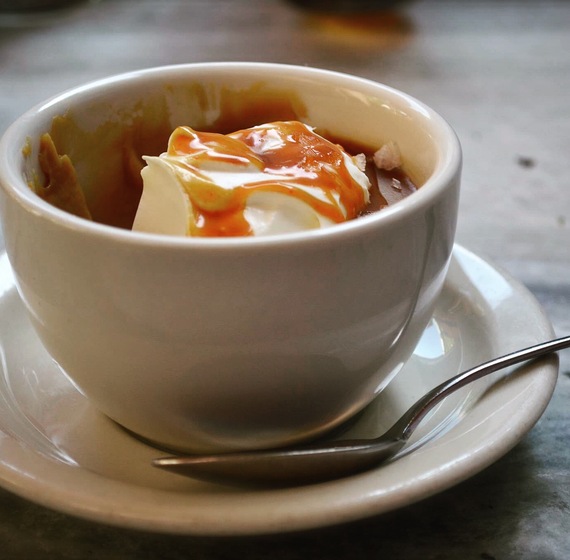 The spoon dipped through the sticky layer of caramel to reveal the satiny heft of pale custard. One taste, her eyes rolled upwards, and she flung the spoon over her shoulder, clattering upon the tile floor behind her. She moaned a few "ums" audibly in the throes of bliss, head back in abandon, cheeks flush as if in mid-orgasm. Bemused by my friend's sudden custard-induced bliss, my own spoon went into the bowl for a taste. It was sublime. We dug into the remaining custard in the bowl, sharing the marvelous dessert, nearly licking it clean like two stray cats in an alleyway that found a saucer of fresh milk.

Some intimacies, such as sharing food with friends like this, can feel like a deep conversation, but in this case it was like sharing a lover. Our ménage à trois (or rather, terzetto) with crema di vaniglia was the passageway, the coming of age into the seductive realm of epicurean delights. The dinner itself wasn't memorable, a predictable pasta of sorts, nor was the wine, only that luxurious bowl of custard. The crema di vaniglia, as described on the menu: vanilla cream custard covered with a soft, rich caramel sauce or chocolate sauce.

This wasn't the beginning of my obsession with custard. Good custard, when prepared expertly, can be either transcendent or terrible, as the weight of a good custard is but a caress upon the tongue, one that coats but isn't grainy, a slip of sweetness without being cloying, light yet rich with velvety texture, all of which contains the secret to its enchantment.

My grandmother, having grown up in England in the 1920s, made packaged Bird's Custard for me when I was a little girl. It was the instant sort of custard that came from a box, easy to make without the trouble of scraping vanilla beans, separating and whisking egg yolks with sugar and hot milk or cream, as Bird's Custard did not require anything but hot milk and the contents of the package. You just had to follow the simple directions on the box, without the need for fussing with eggs. Originally, Alfred Bird's wife was allergic to eggs, so he formulated the recipe back in 1837 in Birmingham, England. Perhaps this explains the British penchant for trifle.

Pudding, as it is known, and an even funnier word, syllabub, were the favored desserts upon the banquet tables in 18th century England, as the spoonfuls of such pablum were fancified with fruits, sponge cake, and other additions, evolving the classic pudding from its nursery fare beginnings. Syllabub derives back to gourmand Samuel Pepys as he mentions "slurping down a syllabub" in his famous diary. It began as a frothy alcoholic drink rather than a custard or mousse, and went on from there, however, puddings and custards are richer, thickened, and not quite the frappé sort of dessert as syllabub.

Butterscotch, another British contribution to desserts and sweets, is more of a flavor made of butter and brown sugar, a cousin to toffee, and perhaps the tawdry step-sister to sultry caramel. My great-grandmother offered up those golden candies wrapped in yellow cellophane from her crystal candy dish. I had handfuls spilling out of my pockets by the time I left her house, eating one after the other until queasy. The sticky butterscotch candy stuck to the enamel of my teeth, which was only remedied by melting it with the pressure of my tongue.

It wasn't until the butterscotch budino one memorable afternoon at Mozza did I realize the sensual appeal of butterscotch, and all other ideas of what I thought of and knew as hard candy exited my sensory memory. The spoonful of creamy custard carried its sumptuous weight, fragrant with vanilla and a seductive hint of butterscotch ingeniously infused within the cream.

Budino, an Italian word for pudding, sounds sexier. You can imagine having this at a café table somewhere in Italy with a strong cappuccino by its side. The coin-sized rosemary cookies served with the budino were wonderful to dip into the custard, making them the perfect vehicle to scoop more butterscotch budino into the mouth without shame. The waiter stood with his face glazed over in lustful wonderment, as he was voyeur to my pleasure. Perhaps the Italian version of custard is very different from the British, and the butterscotch is but lingerie to the delicate nature of cream.

This recipe (originally published in the Los Angeles Times) is by Nancy Silverton and pastry chef Dahlia Narvaez of Pizzeria Mozza. I cannot imagine a better recipe nor would I have the culinary bravery to adapt this one. Though it yields 10 servings, you might consider eating only 5 of them before sharing. The butterscotch budino is served with rosemary cookies at Mozza, however you may eat this at home while enjoying every satiny spoonful, with or without clothing, I mean, cookies.

1. In a large bowl, combine the cream and milk and set aside.
2. In a large heavy-bottomed pot, combine the brown sugar, one-half cup water and salt over medium-high heat. Cook to a smoking, dark caramel, about 10 to 12 minutes. Sugar will smell caramelized and nutty and turn a deep brown.
3. Immediately whisk the cream mixture carefully into the caramel to stop the cooking (the mixture will steam and the sugar will seize). Bring the mixture to a boil and reduce the heat to medium.
4. In a medium bowl, whisk together the egg, egg yolks and cornstarch. Temper the hot caramel cream into the egg mixture by adding a cupful of caramel at a time, whisking constantly, until half is incorporated. Pour the egg mixture back into remaining caramel, stirring constantly with a whisk until the custard is very thick and the corn starch is cooked out, about 2 minutes.
5. Remove the custard from the heat and whisk in the butter and rum.
6. Pass the custard through a fine mesh strainer to remove any lumps and divide among 10 (6-ounce) ramekins leaving one-half inch at the top. Cover with plastic wrap and chill several hours or up to three days.

1. In a medium saucepan, heat the cream and vanilla over medium heat, until simmering, about three minutes. Add the butter, turn off the heat and set aside.
2. In a large heavy-bottomed saucepan, combine the corn syrup and sugar. Add enough water to make a wet sandy texture, about one-fourth cup. Cook over medium-high heat, swirling the pan just slightly to gauge the caramelization, until the sugar becomes a medium amber color, about 10 minutes.
3. Remove the caramel from heat, carefully whisk the cream mixture into the caramel (be very careful -- it will steam and bubble). Whisk to combine. Place the pan in a large bowl of ice water to cool.
4. In a chilled bowl with a wire whisk, beat the whipping cream until it begins to thicken. Add the creme fraiche; whip until thick and fluffy.
5. Before serving, warm the sauce over medium heat. Spoon one tablespoon on each budino, sprinkle with one-eighth teaspoon fleur de sel and add a dollop of cream topping.