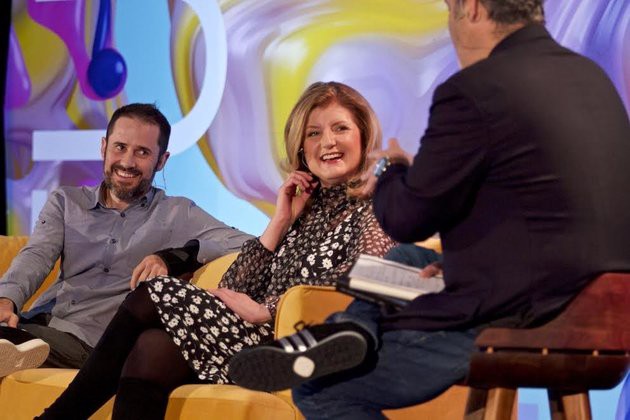 In the early days of the first Internet boom, I showed up at Ev Williams' office to take him out to lunch. When I opened the door, I found Ev behind a stack of books on coding everything from Java to HTML. By that time, Evan was the last employee at Blogger, a company that was both at forefront of the blogging revolution, and on the edge of its own demise. Evan wasn't one of the engineers who created [this version] of the service. They were all gone by then. So every time something on the site would break, Ev would basically have to read through a few chapters of Coding for Dummies to figure out how to fix it. Within a few months, Google had acquired Blogger, Evan went on to launch Twitter and Medium, and the rest is history (in progress).

At the Near Future Summit, I moderated a discussion with Evan and Arianna Huffington. The three of us represented a gathering of some of the web's old-school publishers (66% of whom were quite successful).

To examine the near future of media, I wanted to take Evan and Arianna back to those early days of the Internet and try to figure out what we got right and in which areas the Internet revolution needs a little revolutionizing.

To be sure, we've made a ton of progress, and the ability for a single post by an unknown writer can still go viral and have an impact. But there have been setbacks in recent years, especially as we've moved from the open web, to the mobile internet where a few platforms -- Facebook, Apple, SnapChat -- are dominating the eyeball acquisition game, and are inviting news outlets to publish directly to their platforms. When I asked Arianna what she would do differently if she launched The Huffington Post today, she said, "I wouldn't have a website." And that makes sense for the consumer of the content. But it represents a challenge for its producers. Between creating multiple formats and the near imperative to have an App, the indie publisher is quickly being priced out of the system. It's just too expensive to compete with the big publishers.

Another challenge we discussed is the deficit of investigative reporting, especially at the local level. When Spotlight won the best picture Oscar, we all celebrated the powerful impact that investigative reporters can have on a community. While we often criticize the media, good reporters provide an irreplaceable layer of protection. But because of economic shifts in the news business, those local investigative reporters are in dangerously short supply; in other words, it's a good time to be in the corruption business.

We concluded our discussion by talking about the other side of the news business. The readers who are constantly overwhelmed by a deluge of incoming data and what seems to be a cultural obsession with being awake and online all the time. Evan compared the temptation to look at our screens with the temptation to eat processed food. "We have many multi-billion dollar corporations shooting Cheetos into your bedroom at night, using every technology available to overwhelm you with cheap calories and put them right in front of your face. And we don't yet have the consciousness to say, 'Actually, even though my base instinct is to grab that, I know better.'"

Arianna connected the seeming pride many of us seem to take in always being awake and online to her current passion: The Sleep Revolution. You'll be hearing a lot more about that as she spreads the word about the need for quality sleep, and the many ways downtime can wildly increase your effectiveness when you're on the job. It's true for professional athletes and it's true for techies. As Arianna explained: "Anyone who is part of the creation of this new ecosystem -- they're very careful not to get high on their own supply. They know the intention of consuming more and more of people's lives is not a bug of the system, it's a feature."

It was a great conversation about the state of new media, the role of the indie publisher, and the need for all of us to occasionally chill out (and lay off the Cheetos).

Dave Pell's NextDraft is a fast, entertaining roundup of the day's news.