I am constantly trying to put into words this border identity of feeling and receiving both pride and fear from my mami.

I have a sharp tongue and do not take shit from anyone. She loves that I can defend myself, decades before she learned to do that for herself. But she also knows that this makes life less enjoyable, and the sheet of naiveté has been lifted from my eyes sooner than it was lifted for hers.
I have a low tolerance for sexism and chauvinism. She silenced herself and was silenced for too long for male approval, and she loves that I do not. But she worries about what that will mean in how I will raise my children and how that will translate into her nietos' lives. She worries that she will become irrelevant.

I am bold and unapologetic about my sexual desires and sexual history. She gets scared for my health and long-term ability to love someone beyond sex. But she loves that I get to explore parts of myself she has only begun exploring in her adult life.

I am not quiet; in fact I am loud and erratic. She loves that I make myself seen and visible in a world that tried to silence her -- to make her less threatening. She stands beside me and demands that of herself in her adulthood -- because if I can, so can she.

I do not respect people for their age or their position, but rather for what they offer the world and how they treat those around them. She loves that I am not the meek, docile, future-wife-material mujer who blindly accepts the roles of servitude and hospitality for those around her at a high cost: her autonomy.

I am demanding of my lovers, friends, and family -- I demand mutuality along the lines of respeto, admiracion, amor. She has been stabbed in the back too often by all those mentioned above, and loves that I will not suffer like she did. But she worries this makes me too demanding of partners and an impossible companion.

Immigration has allowed me to see myself through a lens that was otherwise unimaginable antes de llegar a los Estados Unidos. It is hard being the daughter of immigrants, because the expectations -- my trajectory -- are vastly dissimilar within years of arrival. My mami has to jump through hoops and sit with herself just to keep up with what migration has done to her niña, because, "que orgullo me da esta niña malcriada." 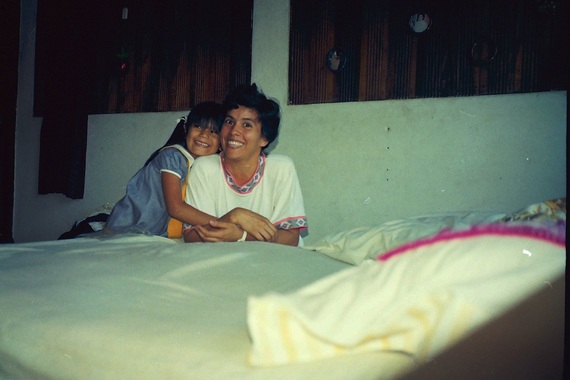 ** I do not italicize Spanish, because to italicize is accent the foreign language, and since Spanish is not foreign to me nor to the majority of my intended readers, I will not "other" what is familiar to us for grammatical points.