Something like half of millennials did not vote in the last presidential election. This is, of course, in the grand-standing tradition of youth eschewing the ballot-box in favor of -- well, probably in favor of doing something more productive with their time. "Grr..! Why don't those darn kids these days vote?" growls many a senescent voice, from generation to generation. "Political apathy will be the death of our nation!" But given this year's circus-masquerading-as-an-election, it is clearly youth that has the right idea in not voting. Indeed, I am here to proudly profess that I number among those 'darn kids' who won't turn up to the polls this Tuesday. In fact, I firmly believe my non-vote will do more for America currently than a vote could do. 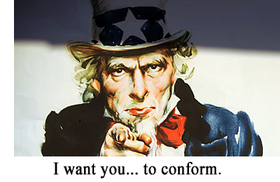 something distinctly uncool about getting mixed up in the political affairs of your parents' generation. I have always suspected younger people avoid political enthusiasm not because of apathy, but because, like being force-fed politically correct morality lessons in elementary school, they find something specious in it. Youth is about rebellion and expression, loud music and experimental drugs -- voting is about conformity and soul-killing compromise. We are still young, and have many years ahead to mold ourselves after our failed elders -- why rush to align ourselves with their agendas so soon? I'm here to extol the significance of the non-vote.

Of course, when you admit you are a non-voter, it is impossible not to get sucked into a vortex of judgement. "How can you potentially let this person become president?" someone always gasps histrionically, as if all the weight of the world now sat squarely on your shoulders. But please, spare me your political babble, your apocalyptic narratives of 'she-demons' and 'Hitler-resurrections' -- I'm a sane person capable of thinking critically on my own, thank you very much. If you truly believe that voting for candidate A or B will better the country, then great, please vote for them. You have the right to that. But your right to guilt others into voting is severely questionable. And so let me first say to those of you supporting candidate A who will immediately claim that a 'non-vote' is a vote for candidate B (and insist others conform to vote as you do), that from the perspective of those supporting candidate B, by that same logic, a 'non-vote' is a vote for candidate A. Therefore we've arrived at a contradictory paradox wherein a 'non-vote' is both a vote for A and B, and your assertion is disproved, Q.E.D.

Next, for those of you who mistakenly believe we live in a democracy, allow me to pull the wool off your eyes. The CIA Factbook defines us as a Federal Presidential Republic. But even that is generous. Our founding fathers engineered the political system to have an electoral college with the intent of restricting political power to the elite - two and half centuries later everyone can vote, but the value of that vote has depreciated, and power to move policy still remains in the hand of the wealthy few. Many people have begun to suspect, rightly so, that America more resembles an oligarchy than a democracy - even former president Jimmy Carter has gone on Oprah to argue this.

Therein lies the danger of this 'voting' facade. If this isn't a democracy, what are you voting for, truly? If you're the idealistic sort, you think you're aligning yourself to a series of values that will improve America and benefit the greater good. That's cute. If you're the compromising sort, then you think you're supporting the lesser of two evils. (To those people, I say please go have a chat with your conscience, then come back.) The real answer is that your vote, whether blue or red, is being cast in support of America's elite ruling class. You are simply voicing whether you believe this segment of the elite should be able to pursue the policies that will allow them to further consolidate their own power, or whether that segment of the elite deserves to do so. Then maybe you cross your fingers, and hope in return for your sham vote that your new patricians up on Capitol Hill will eventually get around to addressing your issues and needs.

The 'vote' is a grand joke -- and we the people are its compliant butt-end. That's why I find nothing more repulsive than voter enthusiasm. Every time I am forced to look at another happy "I voted" sticker or Facebook post, I grimace on the inside, unable to help but contemplate the cheerful pride of the oppressed. As Henry David Thoreau put it, we are in "blind obedience to a blundering oracle." Everyday I am cornered by acquaintances who come up to me with wagging tails and bleating eyes as if to say, "I voted, aren't I so special?" Cringing, I desire only to say in return, "Good for you! The herd of lemmings racing towards the cliff is just a block down on your left -- now please leave me alone, I'm deciding which foreign country I'm moving to."

the idea of the vote is stripped of its facade, many are left holding the palms of their hands up, supplicating the heavens and asking, "What is there to do then?" Third party candidates are a frequent suggestion. While more respectable, this option still harbors too many illusions for my taste. There are other solutions out there, more democratic ones, but that is a different discussion. The most powerful way you can voice yourself right now is to not vote at all. This may seem counter-intuitive, but it isn't. If a large segment of a population fails to vote in an election, this directly undermines the legitimacy of the authority. When people no longer express interest in political participation because that participation is fruitless and superficial at best, and when fewer and fewer turn up at the polls, then our government will be left looking more truly like what it really is: a small chunk of elites that, disconnected from the larger populace, are merely pursuing their own self-interests and exhibiting nothing but ostensible concern for the spiralling levels of inequality dividing our nation. At the very least, a disproportionally large and disaffected voter population will cause our nation's two political parties to reexamine themselves, and begin taking steps towards realigning with public interest.

Youth is about activism, about having that original, innovative idea your parents missed when they were too busy listening to bad nineties grunge music and conceiving you. So if you wish to participate in the long tradition of voting but, like all your progenitors before you, are doing so only by hoping the candidate you voted for will be honor bound to follow through on their word -- well then that is the minimal action that you can take in this election. That shows you care the least. If you don't like my solution, great -- go seek out a new one then. You are the future of this nation, for the time being at least. The choices you make now will define the rest of your life. So go out on November 8th. Be loud, be proud, and do something to show you care. But don't let anyone convince you that conforming to vote one way or another is your best and only option -- we are all free individuals.