A friend and I were sitting in the back corner of a crowded restaurant, huddled over Friday evening beers. The conversation weaved seamlessly between dreams, schemes, boyfriends, family and summer plans. Finally, we landed on the topic of work and I confessed to her that I had been wrestling with an ethical dilemma over the last few weeks:

"I'm a writer, but I haven't even touched the one story I desperately feel the need to write about" I said to her, "and I think I want to give it a shot."

It is a topic that I have avoided for the last three years, tip-toeing around the periphery of my experience, referencing it's after-effects in other stories, but stopping short of the deep dive.

I explained to my friend that, recently, I'd been struggling to find the balance between posthumously respecting my mother's intense desire for privacy in life (and death) and my desire to shed some light on what can be an awfully isolating experience.

But my motives aren't solely altruistic. Lately, I've also begun to crave the revelations and the quasi-clarity that emerge when I dig through my catalog of memories and experiences to pull together a coherent story. The magnitude of this loss and the ways in which it has shaped my existence is still not immediately clear or obvious to me, and I wanted writing to be my crystal ball, as it had been for so many other major life experiences.

Death perplexed me growing up. My brain couldn't wrap itself around the concept. I couldn't fathom how a person could go from existing in one moment to not existing in the next. It almost seemed too absurd to be possible. And then my mom got sick when I was 17.

Although I wanted my mom to live forever and ever, I would occasionally find myself imagining what it would be like if she died. Having had little experience with death at that point in my life, TV medical dramas and angst-y indie music from my teens were my only point of reference. Based on these highly-scientific sources of information, I assumed that it would be loud, dramatic and chaotic. I thought that my body would collapse under the weight of the grief, that I would be so beside myself with sadness that I would be unable to function.

But on October 12, 2011, when my mom was removed from life support less than 24 hours after being rushed to the hospital in the middle of the night, none of that happened. There were plenty of tears, some quiet goodbyes, and then it was over. The moment immediately after death that I had been fixated on for so many years had come and gone.

After she died, I looked out the window to check and make sure that the world was still spinning. Sure enough, people were carrying on as if nothing had happened. There were even smiling families leaving the hospital with newborn babies! I found their insensitivity to my loss absolutely galling.

Over the next three years, I came to understand that those proud parents carrying their shiny new infants out of the hospital as I walked backed to the family car in a daze, wondering things like "is it insensitive to ask who's going to drive the car home?", were foreshadowing my experience as a grieving twenty-something.

That the world would not slow down in honor of my mourning. That I would continue to be a part of polite society, but that it would gradually become more and more foreign. That I would start to feel awkward and conspicuous, as though everyone that saw me knew. That I would feel the need to hide myself away from public view on days like Mother's Day because I felt as though my grief was a pox on anyone unlucky enough to come into contact with me. That I would feel the deep urge to lecture the pre-teen girl in line at Starbucks protesting her mother's public displays of parental affection.

Or, as Anna Quindlen plainly admitted, that there would be a time when the sight of an adult mother and daughter out for lunch could send me into a murderous rage. 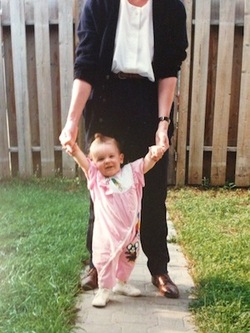 In the three years that followed her death, my life became a bundle of contradictions to unravel and negotiate. It felt as though my mother's passing had somehow splintered my being into a handful of different people, each with competing needs trying to shout louder than the others in an effort to have those needs met.

I developed sharp edges to ward off love that I wasn't ready to receive, but I silently craved affection and attention.

I cried in the arms of several bosses, but couldn't bring myself to shed tears in the presence of family.

I became fiercely independent, yet I yearned for approval and validation more deeply than ever before.

I became acutely aware of the mortality of my family members, but pushed them away because I couldn't handle the emotional exposure.

I collected mother figures like Russian dolls, but I couldn't allow myself the indulgence of feeling safe in their love -- the risk of losing them was just too great.

I wore my personal tragedy like a badge of honor, but privately I felt ashamed of my broken-ness.

Grieving is a messy process, to say the least. Since October 12, 2011, countless people have said to me "I can't even begin to understand what that must feel like." Most of the time, my response is "neither can I." No word of a lie.

It's looking like I'll be writing for the rest of my life.