I put on an act sometimes, and people think I'm insensitive. Really, it's like a kind of armour because I'm too sensitive. If there are two hundred people in a room and one of them doesn't like me, I've got to get out.

Casa Vega is an institution in The Valley -- very little has changed since owner Ray Vega opened the doors in 1956.

The place was usually packed when my friends and I would go, and the later the hour the more crowded the Casa V. was -- big draws were the superb margarita and the attendant Happy Hour, with appetizers, and on any given night you might see any number of television stars and celebs and actors at the bar or in the darkened dining room.

One night in 1995 or so, the four of us had finished our typically yummy dinner at Casa V., and were making our way out of the dark and crowded dining room, when I spotted Brando... 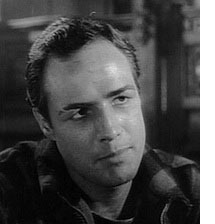 No doubt of it, Marlon.

"Hey, STELLA!"/"What are you rebelling against ?" "Whaddya got ?"/"Nobody tells me..."/"I couldah been a contender. I couldah been somebody, instead of a bum... which is what I am, let's face it."/"Get the butter."/"Do you spend time with your family?"/"I'm gonna make him an offer he can't refuse."/"I spent my whole life trying not to be careless."/"The horror. The horror." Brando !

He was seated on the outside edge of one of the round booths, with four or five guys all chatting and nibbling and drinking away the evening -- except for Brando.

He had his back to his companions, hunched over the edge of the seat, staring with an extreme ferocity into the dining room, searching like some kind of radar, skittering from this person to that, while absentmindedly consuming one tortilla chip after another as a wood chipper might, but never breaking his view of the room and the diners, not looking to see where the chips were.

It was one of those "frozen-slowed-car-crash-uh-oh" kind of moments... I passed within a foot or two of him, not wanting to make a big deal out of it, trying to respect his privacy, but all the same probably staring at him all the while, and as he returned my stare for a brief moment, it seemed as though some otherworldly "something" had just happened.

It was a very strange feeling locking eyes with Brando.

He was like some form of recording device, taking in all the gestures and expressions (those that were visible in the dark), while crunching one chip after another, totally disconnected from his dining partners, and "at one" with the dining room.

One of the assets many high-profile people, actors in particular, possess is an uncanny ability to cloak themselves in obscurity, to actively not attract attention. Brando was cloaked that night and it was only when almost on top of him that it was clear it really was Brando.

My friends and I exited and while waiting for the valet to bring the car around, I asked them if they'd also spotted Brando, to which Norma practically jumped out of her skin and after making certain she'd heard me say what she thought I said, jammed her coat into my arms and said, "I think I left my coat inside..." and with that went rushing back into the dining room.

She emerged moments later saying, for all standing around the valet area to hear, "OMG, it *WAS* Brando!"