A lot happens your freshman year of college. It's one of those years you learn who you are, what you're made of and, in most cases, the art of laundry. For me, freshman year meant Four Loko out of Dr. Pepper bottles on Metro North, falling for a stranger I met on a scavenger hunt, and holding hands with a once-friend for my first tattoo (spoiler: she went bat-shit and called my roommate a cake-faced, boge-smoking bitch).

It was Columbus Day weekend, 2009. I walked through the doors of my family's two-story home in South Brooklyn for the first time since going away to college and living three people to a dorm room. Mom had the house to herself. I had meticulously positioned one of those middle school slap bracelets around my left wrist, barely masking a two-week old tattoo I'd gotten for my father (without my mother's permission) on Saint Mark's Place in the city.

Looking back, settling on a shop called Whatever Tattoo was wrong.

She wasn't suspicious in the slightest. To her, the vintage bracelet was just another five-second trend I was trying on, paired perfectly with an XL Led Zeppelin tee shirt and the blonde streaks I was still growing out from the summer before. I was going through something, that's for sure (Cue: "I'm Not Okay" by MCR and "Torn" by Natalie Imbruglia).

It took all of 20 minutes for me to break.

"I have to tell you something," I said, asking her to sit down.

In hindsight, this was cruel. Her mind went straight to teen pregnancy, leaving anything I said after that that wasn't "I'm carrying some senior on the rugby team's child" to be tolerated, hell, maybe even thrown a ticker-tape parade.

I peeled back the quarter-machine cover-up to reveal the teeny tiny, permanent text: 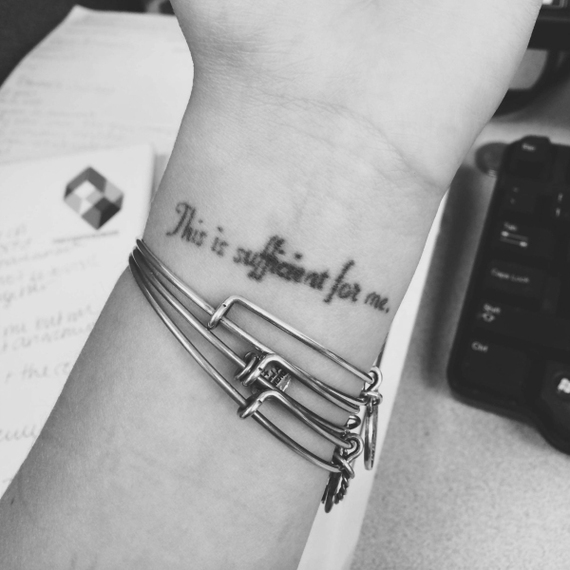 Mom was hysterical. Equal parts angry, touched and relieved I wasn't with child.

"How can I be mad?" she asked, I had hoped hypothetically. She loved it. But she was definitely kind of mad.

Second came an anchor on my upper back for my best friend since I was six.

We met in kindergarten and, at 18, she said she hated me at first. Thankfully, she traded in her grudge for rainy weekends spent hiding handwritten wishes under the floorboards in my room. Sometimes they were for full seasons of Degrassi on DVD, or to marry the Madden brothers. Most of the time they were for a sleepover and, most of the time, they came true.

I sat mom down beforehand.

"Eileen and I are getting matching tattoos," I said with a sort of confidence that surprised us both. I think she thought I was kidding, but I was serious. Rick-Shoots-Up-Degrassi serious (okay, maybe Manny-Wants-To-Be-Hot serious). Either way, we weren't kidding.

The definition we tossed around was, "well-grounded hope." 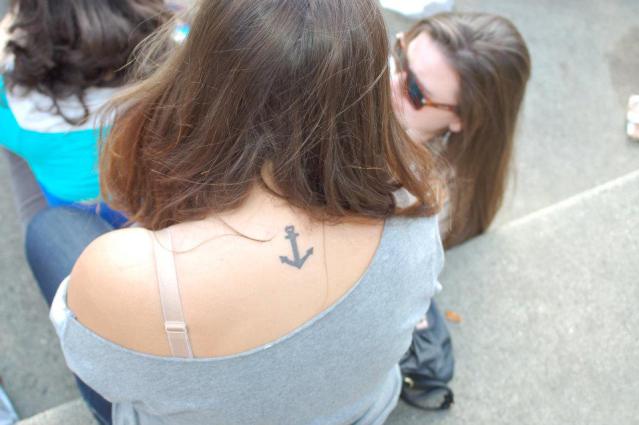 "Since an anchor is what puts down roots deep into the sea to hold a ship in place, it has been associated with strength and stability. The anchor can be seen symbolically as something that holds you in place and provides you the strength to hold on no matter how rough things get."
- Tumblr, 2011

Boy, were things rough at 20 (this is only partly sarcasm; Steve Jobs died that year and Pitbull released an album called Planet Pit, life totally sucked).

Either mom didn't hate it, or she was really good at lying.

Four years, one shot-in-the-dark addition ("Is that a rope or a dollar sign?") and one not-so-terrible touch-up (never trust a guy who says, "I got it" because A. He definitely does not have it and B. It will look nothing like what you saw on Tumblr) later and my best friend is still the one who keeps me grounded/reminds me to eat healthy every once in a while.

Third was an ampersand on my inner right ankle. Mom had no more say. She knew I was going to do it anyway and "at least it wasn't a tramp stamp or Justin Bieber's face." Direct quote. 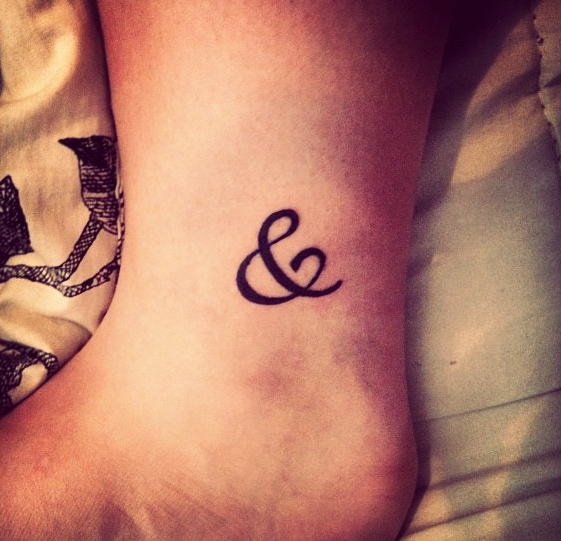 "To always remember what I want to do," I told her, as if I was going to get into some terrible accident down the road and wake up thinking I wanted to be a doctor. "I want to be a writer."

Truthfully, it came on the heels of one passionate journalism course and its brutally honest professor who, Day One, told us, "be prepared to waitress after college. Journalism is a bitch."

(He was my favorite.)

Fourth was a tribute to a summer abroad in France, and mom, or so I said at the time (her true tribute would come later and hurt far less). The foot's a fucking nightmare (and impossible to flatter in a photo so here it is with hanging dragonfly lights). 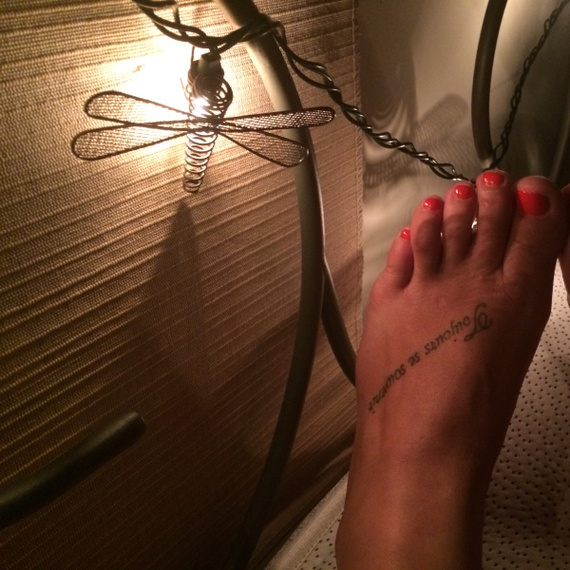 It was summer, 2013 and mom was halfway through her third round of leukemia treatments at New York Presbyterian. We sat and talked for hours from her bed by the window, overlooking the East River. About the Home Reporter, living alone and all the drugs I didn't do at Lollapalooza. About her roommate with the c*nty attitude, her constant cottonmouth and her favorite PA John, or Joe (she could never quite remember), before I told her to look at my foot.

I can still see her face.

"Toujours se souvenir; To Always Remember in French," I said. "It's for you."

She started to laugh from her gut.

She called in the passing resident on her rounds. "This is my daughter, Meaghan," she said, tears of laughter streaming down her face, "and this is her new tattoo. Apparently it's for me."

It really was, I assured her. To always remember the four weeks I spent galavanting through Europe at her expense. To always remember everything she's ever afforded me, like that drunken bike ride along the Siene and that order of Escargot I never ate. And, you know, life.

To always remember where I've been (Brooklyn, Bermuda, Paris, Rome, Rocking Horse Dude Ranch, etc.), where I came from (our stoop on 73rd Street, the county of Cork, my mother's womb), and who I am (a McGoldrick, and, more importantly, my mother's daughter).

She loved it, I think, but all she could do was laugh.

Five treatments in, I called her to tell her I'd fucked up the anchor and that the rope made its silhouette look like a dollar sign.

"It was missing something, I don't know," I said over the phone, smearing tear-soaked mascara from my eyelids to my chin. "It looks awful."

She returned home for five days before she died. We ordered in from Tasty Chicken, watched The Voice and said "Goodnight" in person. We fought hard the Saturday before her heart gave out, but, not about the touch-up.

"It doesn't look bad at all," she said, when she easily could have said "I told you so."

One month after I buried mom next to dad in a shared plot in Staten Island, I buckled up and got the anchor fixed. A few more flowers, some asymmetrical lines and a lot of "Fuck it"s later, the same guy who did my ampersand gave new life to the anchor that once was.

Nearly a year later and I'm still learning to love it, because mom said it wasn't so bad.

Fifth and finally came something special. "Love you more," in her handwriting on my right wrist -- pulled directly from a Hallmark Card she bought me the day I emailed my current job to ask if they had any internships. Not the day they took me on as an intern. Not the day they hired me full time. The day I asked if they had anyone to do their coffee runs. 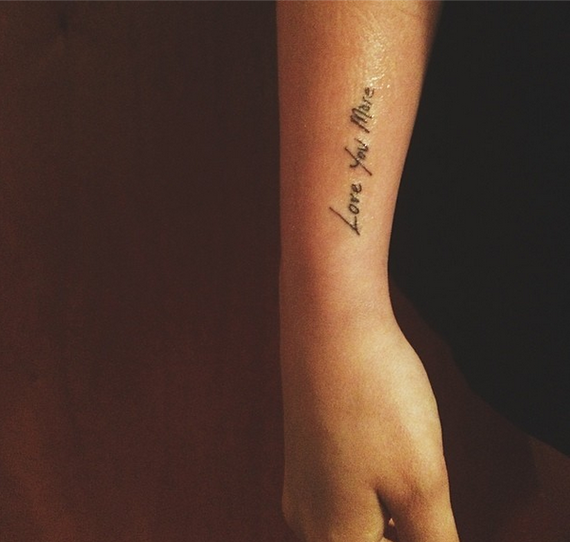 "I bought this card the day you emailed the Home Reporter. I knew you would get it. Your MEAGHAN. Love you more then you know."

Wrong form of "you're" aside, I framed the card and, eight months later, am finally able to accept that she's no longer here. Never gone, though, as her words lay opposite those inspired by my father; the two of them still holding my hand and guiding me through this fucked up life (and helping me home on the weekends).

(As a journalist, I couldn't bring myself to tattoo the wrong form of "than" to the arm that I write with, but that's okay. Grammar was never her strong suit, and "Love you more" was always our thing.)

I think she'd dig it. I certainly do.