I never once heard my mother say the word.

It must have been somewhere in the house of my childhood, that word. Lurking. Hidden. Maybe my mother thought it in big thick letters, as she was growing me, a hearty 9 pound girl. Maybe she worried about the way her own face was swelling as those months dangled, about how she would fit in her late-seventies bell bottoms after I showed my big round head. Maybe she considered saying it out loud in frustration as she stood on the scale in the bathroom hall, or when she glanced at the girls from Charlie's Angels flaunting sleek profiled figures on the cover of the TV guide. "I should lose a few pounds," she could have been thinking. Maybe I was in the next room, watching Mister Rogers, not listening. Or actively listening. But she was careful, my mother.

If she was thinking it, I still did not hear her say it. And so I did not know then, what it could mean to a woman.

And I was a little Italian girl, so food was something primitive in my history and essential even in my first recollection. I loved my mostaccioli like I loved my house, my Little Orphan Annie doll. It mortared every family gathering, every warm Sunday evening. Food was love, love was bowls of thick meat sauce and thin-pounded breaded veal.

And so, in this way, I grew up and grew out. I slipped from skinny 7-year-old to angsty 12, with my wispy angel wing bangs hiding behind a book at the dinner table. I ate when I was hungry, I read books when I was starving for something I couldn't find. Little girls change into women slowly on the outside, but on the inside it's much more sudden. One day, you look at the world through a small binocular view-your house, your mother and father, your walk to the bus stop. Those are enough for you to see. And the next day your eyes are searching and hungry for all the sights of the world at large. Considering and calculating, waiting for something bright and delicious to appear.

I unraveled the mystery of women outside of my own house, through the visits to my grandmother's. This was where my aunts slept until noon in unlit bedrooms and woke up in oversized nightshirts, long dark hair in high ponytails. They painted my fingernails, if I asked nicely. They dressed me up in their clothes and let me sit and listen. I learned what they thought was beautiful and that they hated their hips. They had boyfriends with cars. They talked about diets and ate special fad meals of only tuna fish or hard boiled eggs for days on end. And they sat me on the countertop and we sang songs by The Supremes. My aunts were my first glimpse of young womanhood, and it was whole and full. They might have wanted to be thinner or taller or curvier, but they loved life and they loved me too.

But at home, we still did not discuss these things. There were no diets, no workout tapes. I did not think much about food, that is to say it was pleasant, it was purposeful and essential. But conversations were never about it. And why would they be, when there were so many books and people and places to talk about? Perhaps my mother said, "Finish your meatloaf" as I drug my fork through mashed potato mountains on my plate. But she never said, "You really don't need another cookie" as I worked my way through a second Oatmeal Creme Pie. I did not diet, I did not think I was fat. I did not wonder, she did not assign it value. It was a nothing word.

I don't remember hearing someone my own age say it until middle school. And by then, all the girls were saying it. In the locker room, after gym class, as they fastened the button fly on their late eighties Levi's. "I'm soooooo FAT!" "Forget you! What are you a size three? I'm the fat one." I listened with curiosity, apprising them in the way only a girl slightly on the fringes can. Was this something I should be doing? I studied the intricacies of their dialogue, the one-upmanship of self-deprecation. They spoke over each other, around-but rarely to one another, really, these girls. Unlike my aunts, there was no discussion of peanut-butter sandwich diets or thigh-masters. Just words that had no purpose, traveling around in circles. It seemed to me that the prize went to the girl who was the thinnest, but who believed she was the most fat. I was amazed by this.

And I was confused. The locker room girls looked normal to me, maybe thinner than me, or at least the same as me. I couldn't tell. I locked myself in the bathroom mirror when I got home. I threw my bulky sweatshirt on the tile floor, peeled my tee shirt off quickly. I studied my torso in the mirror and stood on my little brother's step stool to get a better look. I tried to be fair, to look at me like others might. I had large fleshy breasts already, wide, thick boned hips. My waist was small, but my face was broad and round. Was I fat? How could I tell? Did I even have to be, to say it? Couldn't I just say it?

I tried out the words and let them echo against the shower walls. "You are so fat." And I was stung by how they sounded.

"I am fat," I watched my lips move in the mirror, unconvincingly. My face pinched up and my stomach hurt with the staccato sound of it. "You're FAT!" I tried, again.

I wondered what was wrong with me that I did not believe I was.

My mother suddenly knocked on the bathroom door and I jumped. "Dinner."

And so I climbed down from the step stool. I put my shirt back on and turned the light off on myself.

But she had already given me the gift of her carefulness and understood the impossible strength in what remains unvalued. What remains unspoken.

So my mother didn't say a word. 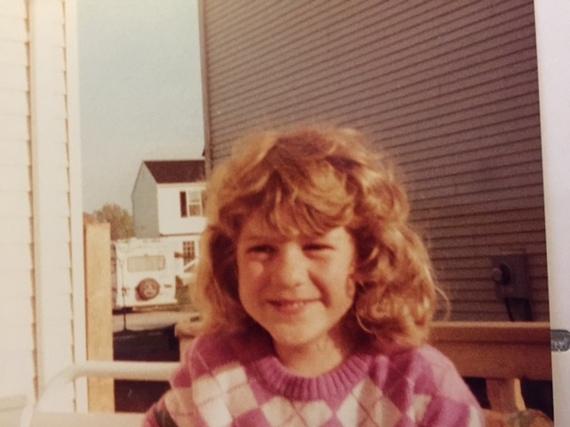