"Oh look," said my mother in a sing-song voice, pointing wistfully ahead, "it's the man in the moon. We haven't seen him in a while, but there he is. He's so bright tonight, but that's him."

We were driving down the street I grew up on and the sun was large and orange and just beginning its trek down toward the horizon. We slowed to a stop at a red light and were squinting into the brightness, and while I have grown used to odd exclamations from my mother, this one struck me as something different, as a magical clue to the dwindling world inside her head.

I turned over her words, puzzling over them and looking at the sun and trying to see what she saw. What a beautiful world, I thought, where the moon is the man in the moon and tonight the moon just happens to be enormous and orange and blindingly bright, and the night sky behind him glows, streaked with pinks and yellows and the occasional dab of blue.

What a majestic world wherein such a thing as that is so exceedingly normal that one might say simply, Oh, there's the man in the moon. My, isn't he bright tonight? 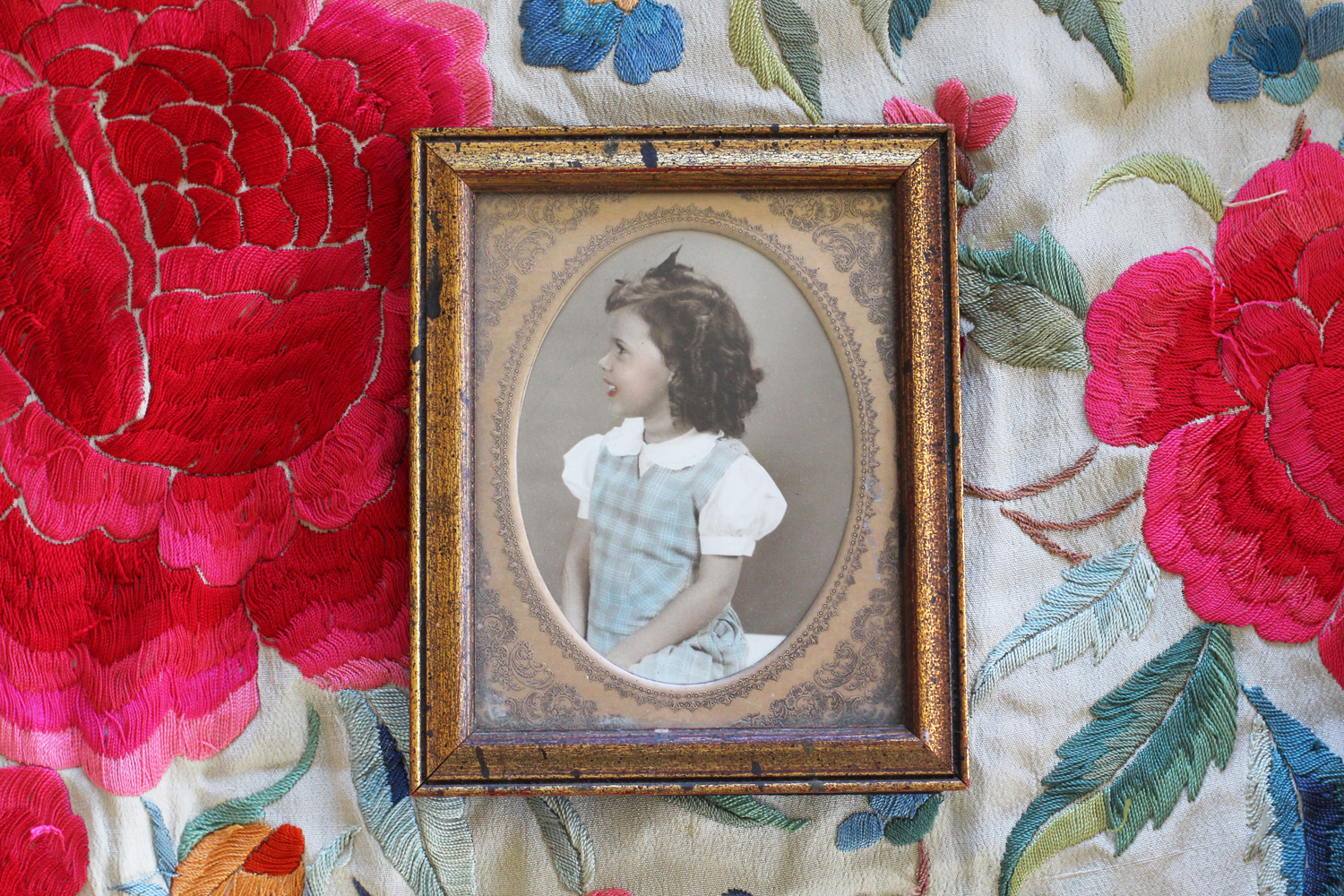 My mother was diagnosed with Alzheimer's and dementia about two years ago. It was in the early stages then, and manifested mostly in a confusion about numbers and the Internet and entirely irrational mood swings and paranoia. To me, she merely seemed more unpleasant than usual. My mother had always been prone to irrationality, so the early symptoms didn't seem that out of character.

But despite her flaws, my mother had always been an exceedingly brilliant woman. She was a gifted historian, renowned in her field, and students still study -- and will likely continue to study -- her texts and translations, long after she is gone. When the symptoms of Alzheimer's first began, the most obvious sign of them was that she was no longer able to hide the more damaged parts of herself from her friends and colleagues; that she was no longer able to direct them only at her family and only in private. And so when her friends first began to tell me and my sister that something about our mother was "off," our initial response was, "Well, yeah."

The thing is, none of my mother's defects ever made me love her any less. I loved -- and love -- her fiercely, and while she was often not the best mother, I always knew that she loved me into oblivion -- into an insane place where only mothers and children are able to exist -- and the two of us, both easily dramatic and equally troubled, were tangled in a heated codependency for just about as long as I can remember. I could count on my mother to say terrible things and I could count on her to love me ferociously, and when that is what you've grown up with and the way you've always been loved, those things are one and the same.

My sister and I have counted on our fingers the ways in which our mother is kinder now, more appreciative, more gentle since the Alzheimer's.

One morning, I was making breakfast for her in her kitchen (my mother can no longer cook or figure out how to pair or prepare ingredients), and I remembered that neither of us had taken our medications yet that day. I said, "We'll take them together." When she asked me why I took medication, I felt my eyebrows draw together. "Because I'm bipolar," I told her uncertainly.

"Yes," I said, so puzzled that this was something she could forget.

"You don't seem like someone who's bipolar," she said.

I laid out all six of her morning pills in a row beside a glass of water and said wryly,

"That's funny. You used to tell me all the time that I was crazy."

"Yes," I said, "all the time." She paused, the look on her face like something you might see from a gentle bird who has just flown into a window and is dazed.

"Well, I guess I wasn't a very good mother," she said, and softly laughed.

My heart dropped and then pounded painfully. "Oh yes you were," I said, hugging her to me so that she could not see my tears. "You were an amazing mother."

It was half-lie and half-truth, but it didn't matter either way. That something as awful as Alzheimer's could give my mother's mind enough empty space that she could see herself from outside of herself, for the first time ever in her life, was touching. And it was sad.

I can see the Alzheimer's progressing. My mother forgets words more and more frequently. Words like "ring" and "grapes" and "cats" (she has taken to referring to my cats as "those big things at Becky's apartment," which she pairs with a hand gesture that is more suggestive of spider legs or jelly fish than of anything related to a cat.) She can barely read at all, and doesn't remember anything she's read almost immediately after she has read it, but she does like to sit with a book from time to time. She likes to feel the pages in her hands and she still reads the newspaper every day, albeit all day long because each time it is new.

She still has a vague but passionate sense of the news and politics and loves discussing them; in fact, little makes her happier. There is a part of her still attached to the academic side of herself, although she is not aware of it. But she has not even opened the door to her office -- the door that leads to walls covered in shelves holding book after book after book, including some of her own, and folders haphazardly splayed across the room full of documents and notes scribbled in foreign languages -- in at least a year. Every time I visit her and walk down that hall, I see that door so poignantly, so utterly closed. That part of her mind is simply gone.

I try to appreciate her for who she is now, to appreciate the gentleness and the unabridged and uncomplicated love she has to offer, but knowing and feeling that I've lost her, there are times when I believe I would prefer that she hurl all of those past fights and tears at me all at once if it meant having her back with me now. If it meant that she would have her brilliant, glorious mind back and that I could look at her again and know that nobody, nobody on this earth knows me better than this woman, that this is the one person who can take all the screaming fights that we can readily invoke -- and therefore see the absolute worst that my person has to offer -- and will still love me and love me ferociously.

I started this essay in October of 2013. It has now been three years since my mother was first diagnosed, although it feels closer to 20. My mother has lost so much of her vocabulary and short-term memory that a conversation with her is now a couple of oftentimes nonsensical sentences on loop. Her gait is a tiny shuffle and the extreme difficulty with which she rises from sitting comes not from any physical ailment, but from the difficulty her mind has wrapping around even the simple shift in bearing we all take for granted. She lives in an assisted living home now with around-the-clock care, and she is happy with all the safeness and predictability that provides. The worse her illness has gotten, the quieter her once haphazard mind has become, and I can almost see the sense of peace and simple joy that has descended upon her like a cozy blanket or a fresh layer of powdered snow.

It is a blessing of unspeakable depth that my mother is happy. I am so massively, overwhelmingly grateful for this simple truth that I am unable to even think the words without melting into tears of exhausted relief. I would never have guessed that feeling fortunate could hurt just as much as feeling loss, and could be equal parts awful and sublime. The sheer depth of my gratitude feels almost transcendent to me; if I had been raised differently, I might think that I was feeling God.

As things stand, I was raised by academics. As things stand, I am simply bowled over by the immense beauty that is the heart's capacity to feel so much: so much pain and so much love and so much anger and gratitude and strength and vulnerability. It is a wonder that we are able to walk about in the world with such a capacity inside of us.

I miss my mother. I will never not miss my mother. I will go months or perhaps -- though I cannot imagine this now -- years without crying for her and then one day I will cut my finger on a knife in the kitchen, and I may suddenly collapse into disproportionate tears that will be some small, childlike part of my mind echoing back a long ago feeling of a mother's comforting kiss. I will have children of my own and I will learn that my heart is capable of much more, so much more love and pain and vulnerability than even this experience has taught me.

If I have learned one thing from my mother's disease, it is that the heart has no limit to what it can feel. There is always a deeper love, and always a truer pain. And when I see my mother's eyes light up at the sight of a simple flower or a chocolate chip cookie, I know that there is always a purer joy as well.

Unlike our minds, unlike our memories, our hearts are infinite.